“No justice, no peace”: protesting for Black lives in downtown Walla Walla 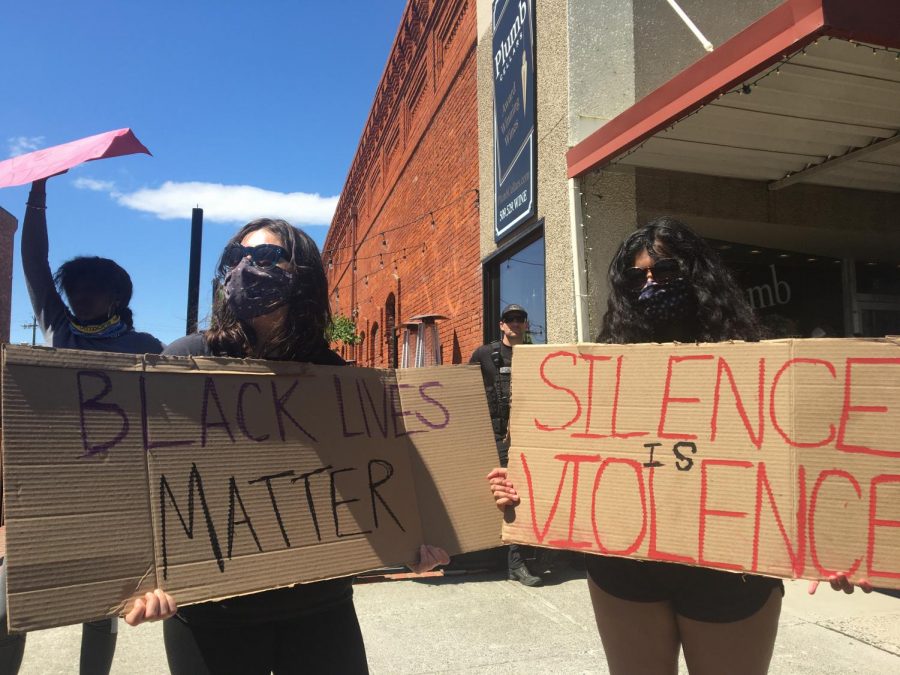 Lindsey Luna was driving home on Friday morning when she saw a woman standing at Land Title Plaza in downtown Walla Walla, holding a sign that read “justice.” Luna, a Latina community advocate, decided to join the lone demonstrator, inviting a few more friends out in their effort to stand up for Black lives. Protests have sparked across the nation following the murder of George Floyd, an unarmed Black man, by police officers in Minneapolis, Minnesota. More people joined their group and the half-dozen stood together in solidarity. Moved by the support she received, Luna was inspired to sustain the momentum. She chose a time and date and asked everyone she knew to come out and join her, expecting a group of around fifty people at most.

At 1 pm on Sunday, May 31, hundreds of protesters had gathered at Land Title Plaza. They lined nearly two blocks of Main Street from First to Colville.

After hearing about the first gathering through word of mouth, rising junior Lauren Yumibe shared an email about the protest with the student body on Sunday morning to spread awareness among the Whitman community.

“I was surprised by how many White and non-Black POC showed up or expressed solidarity, there were around 200 people by my estimate at the peak of the protest,” Yumibe said. “I had initially assumed Walla Walla wouldn’t have protests responding to George Floyd’s murder by police so I was happy to be wrong about that.”

Luna noted that her efforts in organizing the protest are not affiliated with an organization. Her motivations run much deeper and her message is clear.

“I’m just somebody whose core memories as a kid include watching my dad being discriminated against,” Luna said. “I didn’t do this because I want praise, I did it because I’m angry. I have a lot of love in my heart for people of color…The point of what I was trying to portray with the protest is that Black lives matter. It’s not about anti-police. It’s not about anything other than Black lives. We don’t want any more people to die.”

In consideration of the COVID-19 pandemic regulations, most protesters were wearing face masks. One participant was giving away free, homemade face coverings, holding a sign that read “Free masks.”

Demonstrators of all ages were present. A group of young Black children were playing a game of tag while chanting with the crowd: “No justice, no peace.” Drivers held signs from their windows, revved their engines and honked in support as they drove by. A few individuals were handing out cold water bottles and juice pouches from an ice chest to both protesters and the officers from the Walla Walla Police Department (WWPD) that were present.

At several points throughout the protest, those leading the event called for a moment of silence in which participants would take a knee. At 1:43 pm, the crowd requested that the WWPD officers join them in kneeling, to which they continued to stand.

In a video posted by the City of Walla Walla’s Facebook page on Monday, June 1, Chief of Police Scott Bieber thanked the community for being safe and peaceful and spoke on the department’s perspective on Floyd’s murder.

“I appreciate how respectful all of our protests have been to the safety and property of others…The unnecessary death of Mr. Floyd is deeply concerning,” Bieber said. “The actions seen on the video are not consistent with the training or values that we work to promote. Each person deserves justice and the Walla Walla Police Department will continue to work to improve policies, training, culture and transparency.”

Luna expressed her gratitude for the peaceful and respectful presence of the police department as that has not been a consistency in protests throughout the country. After reading some opposing comments on Facebook the night before the protest, she had a few concerns about the safety of people of color in the community and of local businesses downtown.

“I was a little worried that there were going to be people showing up armed, to instigate. While I expected fifty people, also a part of me was worried that a large group of people would come with some sort of mob mentality and try to mirror what’s going on in some of the larger cities,” Luna said. “As I said, I’m not anti-police, I wasn’t there for that. We were there to stand in solidarity, peacefully, with our Black brothers and sisters.”

And peaceful it was. Protesters stayed on sidewalks or close to parked cars, joined in song and tried to maintain distance between one another. Adjacent to the central focus of the support for black lives, Yumibe commented on some of the anti-police sentiments present in some of the crowd.

“…the cops weren’t wearing masks even though the rest of us were, which was extremely annoying,” Yumibe said. “There seemed to be popular support for defunding the police and protests in Minneapolis…which makes me hopeful people are aware change needs to happen on a systemic level.”

Specifically for the Whitman community, Yumibe discussed the significance of spaces within student life that support social action that will be essential in propelling this movement forward.

“Now more than ever it’s vitally important that MECCA, WoCV, BSU, Freedom Songs, and PnP exist on this campus, since these spaces have always been at the forefront of campus activism and education,” Yumibe said.

The turnout left many participants with a sense of support that some did not know existed. Luna described an online comment in which a protester expressed pleasant surprise at the solidarity from the Walla Walla community.

“I was so overwhelmed by the support and the love that Walla Walla displayed for people of color here in our town. I felt inspired to do more…” Luna said. “I’ve talked to a lot of my Black friends and they’re tired. They don’t want to have to continue fighting to stay alive in the United States. Anything I can do to lift them up and fight the fight for them because they’re tired I’m going to do.”

Yumibe spoke on their position in the movement as a non-black POC and offered suggestions for sustaining the momentum of the protest through further action.

“Being East-Asian and half-White police brutality doesn’t target me on a systemic level so I can use this privilege to protect Black people from the police,” Yumibe said. “There’s still a lot of work to do beyond just attending those protests, including donating to bail and mutual aid funds, clogging police reporting apps with unrelated data so they can’t go after protesters, and confronting anti-blackness when it appears in my spaces at Whitman and elsewhere.”

With a mutual forward-thinking perspective, Luna spoke on the inspiration she felt as she left the protest to continue to enact change and the role of a small town in such a movement.

“Using this moment when the world is listening, and our leaders are listening to make legitimate changes in our town is incredibly important,” Luna said.

Luna is organizing another rally this on Sunday, June 7 that is focused on providing a platform to share stories, music, and spoken-word and another the following Sunday, June 14, centered around education and how to move forward. Both will take place at Land Title Plaza at 1 pm. She encouraged local city officials and members of the Whitman community to attend and join in their fight.