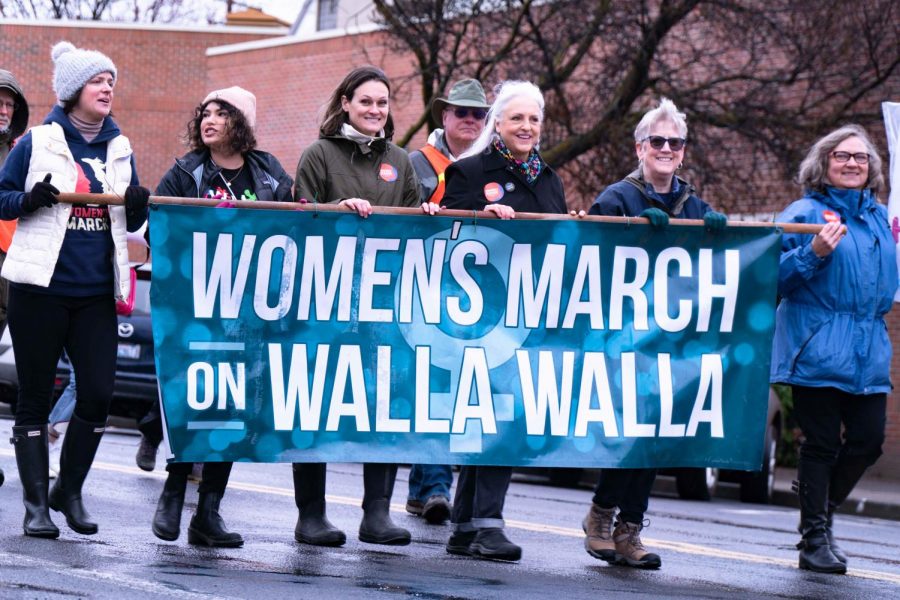 The 4th annual Women’s March on Walla Walla took place this past weekend, starting near the Farmer’s Market area at 108 W. Main Street.

An estimated 300-400 community members took to the streets on Saturday, March 6, to express their support for the solidarity around women’s issues as well as a range of other related topics. The planning team for the Walla Walla march released a list of “Reasons Why We March,” some of which included Black Lives Matter, climate change, domestic violence, LGTBQ+ rights and prison reform. The intersectionality of these issues was a focal point of the message for this year’s march.

The Walla Walla planning team stated in their press release that “the purpose of the march is to continue the work to advance the rights and freedoms of underserved/oppressed people living in the United States, and to celebrate International Women’s Day.”

Former Senator Lisa Brown spoke at the event, motivating marchers as they prepared to loop around downtown following Alder St. and Palouse St.

Marchers sang “We Will Shine,” a short song to the tune of “This Little Light of Mine” – one lyric being “Our conscience has been stirred, now we must be heard…. Come election day, we’re gonna have our way.” Signs seen at the march include “Diversity makes us stronger,” “We are the 51% minority” and “Our bodies, our minds, our strength – together.”

The 4th national Women’s March took place on Jan. 18, 2020. The crowd marching in DC was smaller than in years past, with the event permit only allowing for 10,000 marchers. Compare this to the first national women’s march in 2017, where over 100,000 marchers participated.

This year, the planning team chose to separate from the national Women’s March day in January. This decision was due in part to the shift in leadership at the national level of the Women’s March. The primary reason for the separation from the national date was to have better weather conditions and to make the march more accessible to students in Walla Walla who would be on break in January. Additionally, the planning team wanted the march to fall on the day before International Women’s Day, on March 7.

Ruth Martinez, a member of the planning team for the Walla Walla march, stated that there were multiple reasons for the switch. In general, the separation was grounded in a desire to make the march more accessible.

“There’s not necessarily this big reason why we switched, I know that after the first year we did mainly because there was a lot of drama… the national organization completely wiped out their leadership to create this fresh new start, but after that, we really felt a lot of motivation,” Martinez said. “There was a really good turnout that the first year, [we] really felt the motivation to continue doing this to be something that the whole community could be a part of.”

In January of 2019, three of the founding board members of the original Women’s March organization stepped down. Amidst accusations of anti-Semitism and a lack of focus on intersectional feminism, Tamika Mallory, Bob Bland and Linda Sarsour turned over their positions to a new leadership team. In 2020, the national organization hoped to bridge gaps in the large community of supporters by choosing three overarching themes for the January 2020 march. These themes were climate, reproductive justice and immigrants’ rights, expressed in panels featuring activists from these communities in the week leading up to the March.

In Walla Walla, the leadership team remains grateful for the consistent turnout for the march. Martinez expressed her personal motivations for helping to plan and participate in the march.

“The Women’s March is always something that’s been really important to me, it can almost be a spiritual experience to be a part of this huge thing. I think as a woman it’s important for me to march and have that experience,” Martinez said. “We created this long list of different issues and a lot of those issues are really important to me, those are ongoing reasons why I continue to march and bring awareness and focus on those issues.”

Giselle Hausmann, a junior at Whitman College, planned on attending the march this past Saturday. Hausmann was excited about the chance to show solidarity with the community, especially one that reaches beyond Whitman.

“We have a long way to go in terms of women’s rights, and I feel like these marches are a safe and healthy space to voice our opinions and fight for what you believe in. I think there’s something really special in a community coming together for a common motive,” Hausmann said in an email to The Wire. “Personally, Whitman often feels like a bubble, but these events are one of the times in which we bridge the gap between Whitman and the greater Walla Walla community.”

Judy Peasley, a member of the Walla Walla chapter of the American Association of University Women, spoke to the Union-Bulletin about why she has marched for the past three years.

“To have women in the seats around the world in leadership positions and decision-making seats … I just think we need more of that,” Peasley said. “I don’t want my granddaughter to have to be marching down the street when she’s 50. I want her to feel that things are the way they should be.”