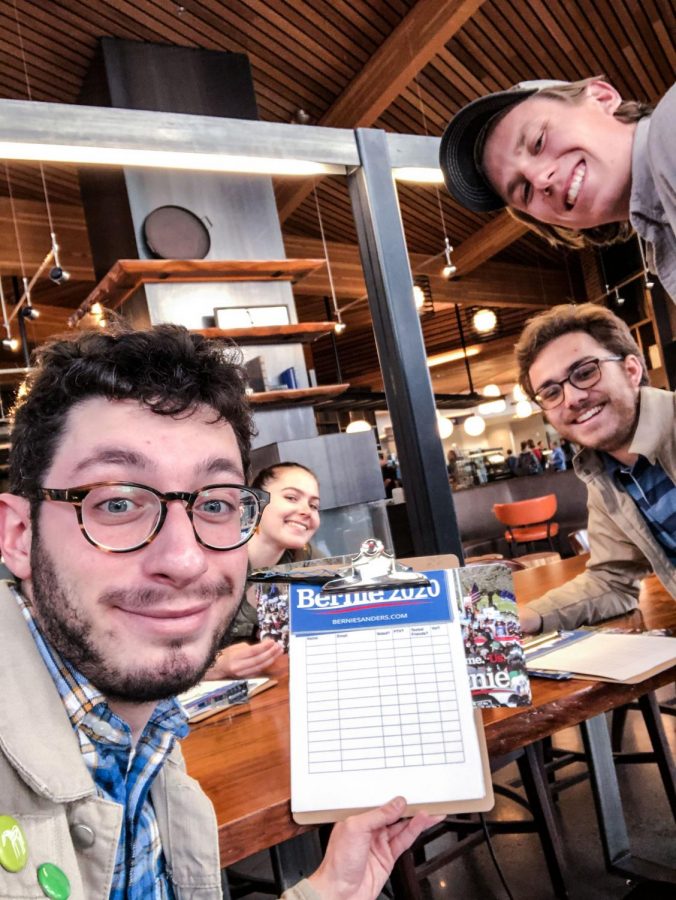 Whitman clubs and community members have taken up the charge to organize and create excitement around the 2020 primary presidential election.

Washington state voted in the primary election on March 10.

According to senior Andy Burnstein, the difference in organizing activities between the run-up to the 2020 primary election and the 2016 presidential election was noticeable.

“There was no voter registration effort in 2016. No advocacy movement around elections in 2016, when I was a first year,” Burnstein said. “I remember Trump winning and the campus being dead silent the day after. It was a really weird time at Whitman.”

After the 2016 election, advocacy clubs began tabling and canvassing to register students to vote. For the 2020 primary, one voter registration event was organized on campus to help students register locally.

Prentiss Hall Resident Director Mary Tabb contacted Burnstein to lead a voter registration study break event on Feb. 27, 2020, because of his experience in voter registration. He reached out to leaders from Planned Parenthood Generation Action and the Sunrise Movement to help students register to vote in time for the Washington state primary.

Planned Parenthood Generation Action (PPGA) student leader first-year Kaitlynne Jensen said that the study break in Prentiss was a one-time event. PPGA club members have done voter registration canvassing in Walla Walla and on campus in the past. Jensen said that 12 students registered at the event.

“The voter reg[istration] event was super fun though! We had ice cream, and a lot of people came. We got 12 people registered to vote which doesn’t seem like a lot, but that’s actually a really big number for an event like that,” Jensen said in an email to The Wire.

Associated Students of Whitman College (ASWC) hosted a discussion about the primary campaign in Reid on March 5 and shared student opinions anonymously on the Instagram stories of the official ASWC account.

ASWC Student Outreach Committee Chair Omar Aldahleh said that the event was part of their weekly “chill-in” series and was intended to gauge student opinions. Aldahleh described the chill-in as “every single person from my committee — including myself — sits downstairs [in Reid campus center] and we have chips, Oreos and some free stickers and we have a topic, a weekly topic on differing issues … We usually try and keep questions somewhat relevant to things that might be going around on campus or off campus.”

The event was not in support of any candidate or election issue. Aldahleh and the outreach committee decided to host the event to learn about how the primary is affecting the campus community.

“The main point of that whole session is to hear what the student body is thinking, what issues feel pertinent, and is there a way that ASWC could potentially help alleviate or even fix those issues on campus,” Aldahleh said.

Student organizers for the Democratic Socialists of America and the Sunrise Movement have been canvassing and phone banking in the Walla Walla community. Both organizations have endorsed the Bernie Sanders campaign.

The Sanders campaign has also started canvassing among Whitman students. Whitman alum Tyee Williams ‘19 worked for the Sanders campaign in early voting states, including Iowa and Nevada, and returned to campus on March 3 through March 5. He came back to help his friends organize support for Sanders on campus.

“First I just reached out to friends that I had that I knew were Bernie supporters and we’ve just been canvassing in Cleveland [Commons] and asking people if they want to be volunteers with the campaign and there has been an overwhelming amount of support,” Williams said.

“My goal is to spark — and like seed — the people continue organizing because I think the way we’re going to win this campaign — if we can — is by getting people to talk to their people,” he added. “It’s like everyone is an organizer in their own right in this campaign, so it’s not like I am the one directing everybody for what they’re doing. It’s just seeding that idea.”

Many of the students involved in the campaign realized the need to advocate for Sanders after the March 3 Super Tuesday elections. The democratic primary narrowed to Sanders and moderate rival Joe Biden, with Biden in a 91-delegate lead.

“Canvassing in Cleveland is a brand new thing for me. I had been more of the small donor set in the campaign before last week,” Galant-LaPorte said in an email to The Wire. “My friends were putting on the event, and I have kept wanting to do more outreach on behalf of Bernie, especially as young people were lacking on Super Tuesday.”