“For the Record” zine sparks conversations around Power & Privilege 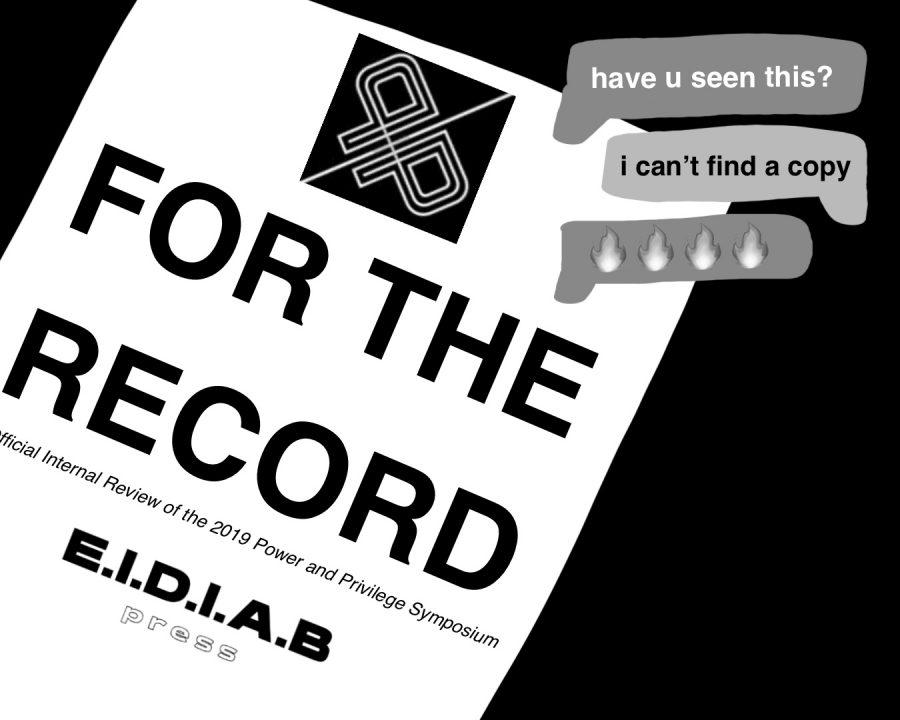 The zine strategically lays out a historical claim for reparations at Whitman College, using a 1970 open letter from the Black Student Union to frame the events surrounding the 2019 Power & Privilege Symposium and the “We Need to Thrive: A Manifesta” released by a group of women of color faculty members last year.

The author defines what reparations are and why they chose to use that word specifically by using excerpts from Ta-Nehesi Coates’ influential 2014 essay The Case for Reparations.  The inside cover of the zine reads “For Megan Waldau ‘20 and Jaisa Swasey-Bellini ‘21,” and it in part makes the case for them to receive reparations for their respective work as the executive director and co-vice president of operations for the 2019 Power & Privilege Symposium.

The anonymous group then brought the national call for reparations to Whitman with historical documents. The letter from 1970 is used to demonstrate the history of demands for reparations at Whitman. The letter is accompanied by an opinion piece written by Timothy Kaufman Osbourn, a retired professor of politics and leadership, that was published in The Wire in 2017.

The letter is titled “B.S.U. Demands for Whitman College.” The demands in the letter include increasing the percentage of “black student[s] and other ethnic groups to 15% of the student body, better and more consultative efforts to recruit students of color from the admissions office” and “ample financial assistance [to] be set aside for all black students and other ethnic groups.”

The author of the zine then goes into their account of the 2019 Power & Privilege symposium and its aftermath, and makes a call for reparations to the 2019 executive team. Several members of the 2019 executive team resigned from their positions during the time leading up to the symposium. The author makes claims about many faculty, students and staff who were involved in the controversy.

In the concluding “Letter From the Artist(s)” the author or authors write, “My intention is to bring attention to the cyclical nature of negligence towards relationships, that lack of reciprocity has a consequence and that these students were not the ones. Let this be a reminder that when superficial solutions are offered, a problem is being treated as superficial. And we see right through it (author’s emphasis).”

The title of the zine references the external review that the College’s administration is conducting on the symposium.

Public response from the administration has been limited. When reached for comment, Vice President of Diversity and Inclusion Thomas Witherspoon declined to comment because he was not employed by the college last school year, and he directed The Wire to Dean of Students Kazi Joshua. Joshua also declined to comment.

However, sections of the student body have been forthright in their support for the zine. The Writing House and the Multi-Ethnic Center for Cultural Affairs (MECCA) co-hosted an event dedicated to reading and discussing the zine. The event was titled “The Writing House becomes the Reading House,” and was attended by about 20 students.

According to MECCA Resident Assistant (RA) Sofia Solares, the Writing House RA Alejandra Wait and her residents approached Solares about co-sponsoring the program. Solares said they wanted to create a space outside of the Power & Privilege Symposium and Associated Students of Whitman College (ASWC) for students to engage with the zine.

“We haven’t gotten any approval or any like negative feedback [from residence life]. We’re kinda just doing it and if we get in trouble I don’t care,” Solares said. “I’m excited about this program, I’ve had a lot of people ask me [about reading the zine] because they know that my house has a copy and they know that Alejandra and I are putting on this event.”

Many students said they attended the event specifically because they had a hard time finding a copy of the zine. Most of the evening was spent in discussion and went an hour past the event’s scheduled end.

Solares said that for her and many of the attendees, the zine provided a new perspective on what had happened surrounding the 2019 Power & Privilege Symposium.

“All of the information I had about the goings on was either through the grapevine or in an official email [from college administrators],” Solares said.

Senior Walker Orr also attended the event and appreciated the opportunity to be informed on the events surrounding the 2019 symposium.

“I was impressed with how difficult [it was] to get the full story on anything — and [I am] thankful to the people who put this out,” Orr said.

Editor’s Note: This is part one of a two-part series on the “For the Record” zine.