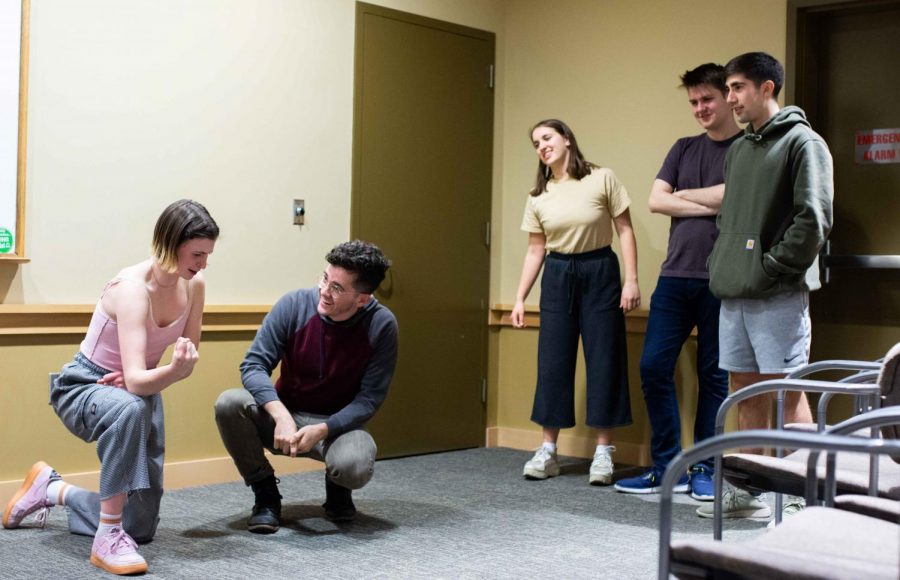 Sophomore Matthew Triplett explained how the group has been practicing and performing in the Kimball Theater in the Hunter Conservatory. A few incidences during the fall semester regarding the consumption of alcohol by audience members during performances in that space have led to the team’s probation. This means that the team can no longer use Hunter as a practice space and would not have been able to perform at all had they not reached a compromise with the administration.

Senior David Lilburn described the interactions the team has had with different administrative groups and security on campus to try and work through misunderstandings and reach a solution.

“At the beginning of this semester we were notified by Juli Dunn … that Varsity Nordic had been put on probation and… that we should meet with her to go over the specifics of what happened,” Lilburn said. “We were notified that over the course of the fall semester, security had been finding bottles of alcohol in our performance space after our performances.”

Lilburn details a misunderstanding regarding who was drinking; it was perceived as though the team was using alcohol during practices. The team was able to clear up that it had been done by a few members of the audience, but they took partial responsibility for this violation of campus policy.

“By virtue of having our shows and not directly telling people not to drink, the administration — and to some degree, we also feel culpable in this — felt as though we encouraged drinking in that space,” Lilburn said. “And we certainly by virtue of having our performances there brought people who otherwise would not have been there and would not have been drinking into what is an academic space.”

When asked about Varsity Nordic’s probation, Senior Associate Dean of Students Juli Dunn replied in an email to The Wire.

“Our office does not discuss other students’ conduct matters.  I will not be able to comment on this,” Dunn said.

Triplett reflected the team’s hopes of continuing to work closely with the administration and security to find a long-term solution, but that in the meantime, the team would be implementing certain changes to their shows.

“For the time being, we’re going to be performing on a slightly different schedule, we’re going to have security at all our events and we’re going to pay for that with ASWC funding … We’ve set up a Venmo and we have a tip jar, and some people have been generous enough to give us some donations,” Triplett said. “It’s really all about building that relationship with the administration to try to prove to them that we are a trustworthy organization that is capable of running events that coincide with campus policy.”

As a closed group, Varsity Nordic does not receive traditional club funding from ASWC. However, they were able to receive alternative funding, avoiding having to hire security out of the pockets of team members.

“We applied for grants and got about $200 that we can use to pay [for security]. We know that’s not going to cover all the costs but it’s pretty significant towards helping out. The main concern we have right now is probably the 24-Hour show and funding that,” Triplett said.

Lilburn described the impending logistical solutions to hiring security for twenty-four hours and the complications of ASWC funding supporting that event.

The presence of security at events is something that the school plans to implement moving forward. Due to the incidents that took place last semester, there was a more urgent need to put this system into action.

Lilburn speaks on this new external administrative influence in relation to the team’s more independent history and structure.

“I think that this is the introduction of some oversight and that isn’t necessarily bad,” Lilburn said. “Before being told by the school that this was something we needed to perform, we were discussing the possibility of having security at our shows just because we did feel like the amount of drinking and rowdiness that was occurring in our audience that was increasing to levels that had not been seen previously.”

Triplett describes why he thinks these developments among the audience of Varsity Nordic shows have become more of an issue as of recently.

“What’s important to realize is that before the last few years we weren’t particularly very popular so not that many people were actually coming to our shows and they weren’t widely appreciated events,” Triplett said. “So I think ultimately what it comes down to … is that we weren’t prepared for the growing pains of reaching a wider audience and becoming more of a study break and an opportunity to blow off steam and some people took advantage of the casual tone of our events.”

Overall, the team has expressed a great amount of gratitude towards the administration and security for allowing them to continue to perform and practice in the space despite the events of last semester.

“The administration has been pretty clear about what they want from us and we’ve been working pretty hard to make sure that we meet those requirements and to show that we do respect this space,” Lilburn said. “We’re thankful to the student body for sticking with us through this transition period and just the enormous support that people have by showing up to our shows.”

Triplett echoed these sentiments of gratitude for the student body that makes what they do possible.

“Keep coming to our shows, we do what we do because we love it and the fact that people come and just watch us have fun it really does mean a lot to us that’s really what it’s all about,” Triplett said.