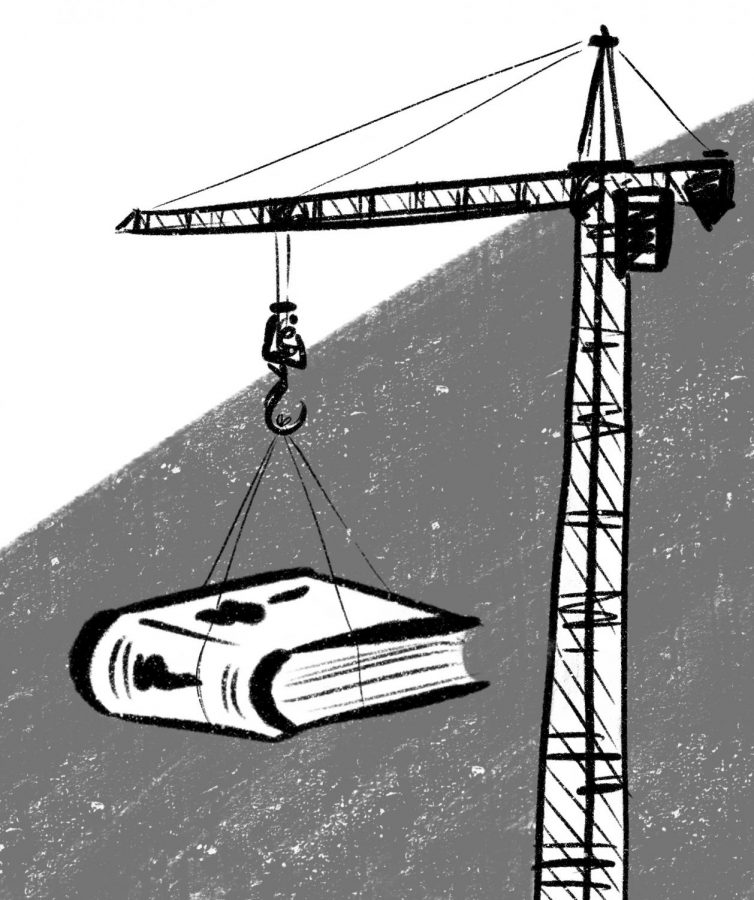 The Penrose Library has undergone a sustainability upgrade. Last week, the Penrose Library traded in its fluorescent lighting for higher efficiency, longer-lasting LED bulbs. The upgrade was part of a campus-wide initiative towards greater lighting and energy efficiency, taking Whitman College one step closer to the sustainability goals they set in their 2016 Climate Action Plan.

Senior Thys Reynolds, who is the ASWC Sustainability Director, explains why the Office of Sustainability and Whitman administration have focused their efforts on LED installations.

“The Sustainability Committee has had ongoing conversations with Whitman staff regarding Whitman’s priorities and the most effective ways we can spend our money to immediately reduce our carbon footprint,” Reynolds said. “Currently, switching to LEDs is one of the most immediately beneficial measures we can take, so ASWC Sustainability will continue to advocate in that direction.”

“The conversion of all lamps (aka lightbulbs) in the library to LEDs reduces the energy consumption of the Library’s lighting system by about 50%,” Brown said. “This is an annual reduction of about 500,000 kWH of electricity and 355 metric tons of carbon dioxide equivalent of greenhouse gas emissions.”

To put that into perspective, the LED light conversion will save the equivalent amount of energy needed to power about 46 average American households for a full year.

“The project will pay for itself in about three years, considering both energy and maintenance savings,” Brown said in an email to The Wire.

The Whitman community is becoming increasingly aware of the lighting upgrade. A message posted outside the library and on Penrose’s social media reads, “Please excuse the mess. We appreciate your patience while work crews convert all lighting to energy-efficient LED lamps.”

Despite the disturbance apology, first-year Joy Nampaso did not find that the light installation impeded her study.

“I saw on their Instagram that they were changing the lighting towards something more green,” Nampaso said, “but the work they are doing in the library and the lighting change isn’t really disruptive to me.”

Tom Call, a circulation supervisor at the library, was on-site for some of the light installation.

“I haven’t been here for a lot of the process, but there have been no complaints about noise,” Call said. “Very early one morning, Wednesday, I think, there was a lot of noise, but there were no students in the library at the time, so I have heard no complaints.”

While students seem unconcerned about the minor disturbances the lighting upgrade caused, many have voiced concern about whether the college as a whole is doing enough for sustainability.

“I think the LED lights are a great initiative because it shows that the school is committed in approaching energy sustainability. But there is so much more to be done,” Lakjohn said. “When [Whitman representatives] came to my school they marketed themselves as a very sustainably focused institution, but on campus I feel like most of the work is being done by the students.”

Over the past decade, the Whitman community has taken great strides towards achieving greater sustainability. Alongside the creation of the sustainability coordinator position in 2013 and Whitman’s 2016 Action Plan, environmental efforts are evident in many aspects of Whitman’s infrastructure and culture. Whitman’s sustainability efforts include a recycling center, bike sharing and reminders to turn off the lights and recycle in Whitman residence halls; however, much of the ongoing sustainability initiatives depend upon the continued commitment of the student community. Currently, Whitman Sustainability Coordinator Elissa Brown holds the only full-time sustainability position at Whitman.

Reynolds is one of the students on campus working with Brown and campus administration. He offered insight into Whitman’s current sustainability objectives and approach.

“Sustainability shouldn’t be a distinct, symbolic entity on campus that we can point to and feel good about ourselves,” Reynolds said. “Sustainability needs to be infused into all of our actions, from energy usage to financial aid to faculty/staff hiring to prioritizing diversity and inclusion. People are starting to realize this. LED installations are a tiny piece of this puzzle, but they show the direction that the Whitman administration is willing to move in.”

For those wishing to learn more about campus sustainability engagement, the sustainability groups on campus are coming together for a Sustainability Kickoff in the Reid Ballroom, February 18 from 2-4 p.m.