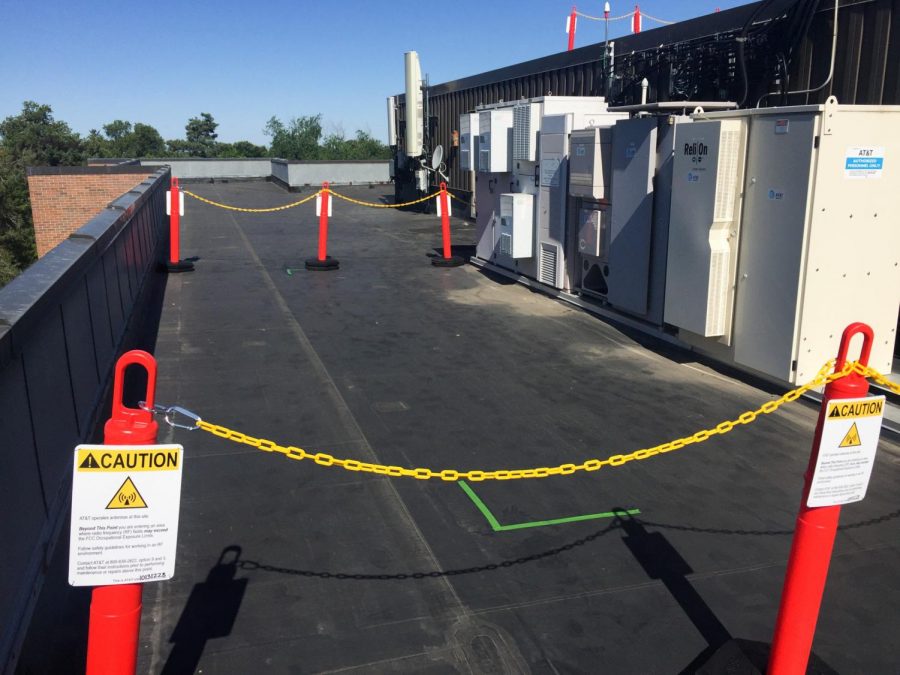 The roof of Maxey Hall. One of the cell towers is on the other side of the barriers. The barriers were put up to warn workers on the roof about RF radiation. Photo contributed by Jeff Donahue

Thirteen. That’s the number of years that Physical Plant employees have worked on the roof of Maxey Hall — without suitable safety training — while cell antennas have occupied the same area, exposing workers to varying levels of radio frequency radiation during the completion of projects and regular maintenance. Earlier this month, the Washington State Department of Labor and Industries cited Whitman College for failure to provide appropriate safety training and equipment for radio frequency radiation.

“The roof at Maxey … has got everyone kind of spooked,” Whitman Physical Plant Project Manager Jeff Donahue said.

According to Whitman College Manager of Investments Justin Rodegerdts, in 2006 the college leased a portion of the Maxey Hall roof to T-Mobile for cell antennas, and T-Mobile put up the cell towers shortly after. AT&T received a lease and put up their cell antennas in 2009.

“Each lease provides each cell company a defined footprint to house their equipment on the Maxey Hall roof, which we give them the right to access,” Rodegerdts said in an email to The Wire. “The lease terms are for five years and are automatically renewed unless there is a significant breach in the lease and the offending party does not rectify it. One company’s current lease runs until 2021, and the other, 2024.”

According to Donahue, the Physical Plant was not informed of the hazards of the cell antennas and T-Mobile did not put up warning signs about the hazards. There was no safety training for employees working on the roof near the cell towers.

Whitman College did not know about the potential hazards of RF radiation around the cell towers until 2011, according to Whitman College Chief Financial Officer Peter Harvey.

Whitman College Manager of Environmental Health and Safety (EHS) Fred Miller says that his office first learned about worries over the cell towers in 2011, when employees from the Physical Plant raised concerns over safety.

“In 2011, [EHS was] notified that there were cellular antennas on the rooftop and that there could be employee safety issues associated with that,” Miller said. “So [Whitman College] engaged [an independent] consultant to come measure the radiation from the antennas. The consultant’s findings indicate[d] that we were not exceeding regulatory thresholds [for RF levels] in the workplace.”

The consultant who was contacted recommended that a warning sign be placed on the doorway to the rooftop. Whitman College Safety Coordinator Kathy Rogers did so.

The consultant also recommended that the time allowed in front of the cell towers be limited to 15 minutes and then increased that limit to 30 minutes after a second monitoring of RF levels. Rogers, based on the recommendation, set the time limit to 15 minutes, in an effort to ensure safety.

Donahue says that before the time limit was set, workers spent hours next to the cell towers working on the heating, ventilation and air conditioning (HVAC) systems, roof repairs and general maintenance.

“They were up there a lot,” Donahue said. “Everybody was.”

In June 2019, worry over RF radiation on Maxey arose once again at Whitman when AT&T hired Waterford Consultants LLC to evaluate their antenna installation on the roof of Maxey Hall, based on responses to industry conditions.

Waterford recommended an assessment that included both the AT&T towers as well as the T-Mobile towers, and Park hired Waterford to do an assessment specifically for the college on all cell towers on the roof.

The report that followed found that at the penthouse level of the rooftop — a 12-foot raised section on the main level of the roof — T-Mobile’s RF radiation was at 100-500 percent maximum permissible exposure (MPE), and AT&T’s levels were 500-5000 percent MPE, which means the levels would be 0-5 and 5-50 times over the public exposure limit, respectively.

The RF radiation levels on the main level of the rooftop, where Physical Plant Maintenance mostly works, were generally 100-500 percent MPE, except for small parts in front of the T-Mobile cell towers, which were 500-5000 percent MPE. This means that the RF levels on the main rooftop would mostly be 0-5 times over the public exposure limit.

The report was calculated using a computer-generated model, and not from readings from the cell towers. It was also generated from the worst-case predictive modeling. The report called for safety signs and barriers, site inspections, RF online safety training and updating Whitman College’s operations safety plan to include RF emissions safety guidelines as remediation.

After receiving the report, Park barred any workers from going on the roof, a measure that is still in effect. However, four HVAC systems that Physical Plant workers need to access are also located on the roof.

Physical Plant workers have been worried about the RF radiation from the cell towers, but have been doubly so since the report came out. Donahue was deeply troubled by the report’s results.

“We found out that we should never have been on that roof,” Donahue said. He added that the workers have had to fix HVAC systems and do other work on the roof for years in front of the towers.

“We had to put in a new tower up there. The crane operators, contractors, we were up there for hours at the time. Standing right in front of those things and didn’t even know what the hell they were doing,” Donahue said.

In terms of the effects of RF radiation, Miller says that RF radiation affects people differently than ionizing radiation.

“Non-ionizing radiation causes damage primarily by heating fluids within the body, beginning at the surface and working inwardly as adjacent tissues heat up,” Miller said in an email to The Wire. “Radiation such as that from cellular phone antennas causes exposed surfaces to heat up if sufficient power is applied. This is much like a microwave works. Overexposed individuals may experience a hot or burning sensation. This is typically enough to warn them off before lasting damage occurs.”

However, Donahue said that many of the jobs done on the roof are done during Walla Walla summers, which means working in the sun for hours, when a hot sensation might be dismissed. Physical Plant workers do not have any protective gear or RF meters while on the roof.

Randy Coleman, Physical Plant Maintenance Supervisor, has also been worried about the safety of the towers.

“I feel like a little more research should have gone into whether it was safe to install cell phone towers in an area where people are working that are not trained to be around [them],” Coleman said. “I don’t feel like we got a lot of information about this. We were just told it was safe.”

In August 2019, the Washington State Department of Labor & Industries (L&I) received an anonymous complaint over concerns about the levels of RF radiation on the Maxey roof.

According to Miller, EHS hired a specialized consultant, who is an electrical engineer, to work to develop training procedures directly after the college was informed of the L&I complaint.

An L&I inspector recently traveled to Whitman to investigate the complaint. The inspector conducted an inspection of the roof in August, 2019, and then visited with employees during October 2019. In mid-November 2019, L&I gave Whitman College a general citation in a verbal report. A general citation is the lowest level of citation and does not impose a fine. L&I requires that the employer fix the problems within 30 days of written notice of the citation. The college should receive written notice within three to four weeks of the verbal report.

Whitman College Chief Financial Officer Peter Harvey attributes the problems to a lack of understanding about the danger of the cell towers.

“[We] didn’t realize the risk,” Harvey said. “There’s so many things out there that could have risks and I guess that responsibility goes on me as much as anybody that I agreed to put antennas up there.”

Harvey said that the original reason for leasing the space to the cell companies was concern over cell service for the community, especially in the case of emergencies, such as when people have to call 911.

Harvey added, “That’s not an excuse. We should have [realized the risk]. I own that.”

The college is currently working with a consultant to resolve the cited problems, within 30 to 45 days from the verbal report. The moratorium on access to the roof is still in effect. However, when access to the roof is necessary, cell phone companies are able to turn off the power, so that employees can work safely on the roof. This process can take up to 72 hours.

Looking towards the future, Coleman says that his goal is to understand what has happened.

“I just want to get to the bottom of what we were exposed to: if we could have any ill effects from it in the future, if it harmed our health in any way,” Coleman said. “That’s the main thing that I’m after.”

Harvey is currently in communication with the cell companies about ending the leases.

Donahue believes the cell towers should be removed, considering the distress they have caused Physical Plant workers.

“We just want to be heard, and we want to be listened to,” Donahue said.