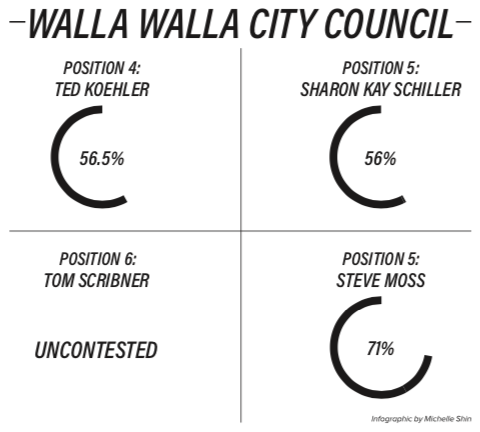 The 2019 Walla Walla County elections took place on Tuesday, Nov. 5. Several positions were up for grabs in contested races, and winners have been tentatively announced. Although most of the ballot-counting has concluded, results will not be formalized by the county until Tuesday, Nov. 26. The following results detail the presumptive winners of notable government seats that were up for election this term.

For the Port of Walla Walla District 1 Commissioner role, challenger Kip Kelly ousted incumbent Peter Swant by capturing roughly two-thirds of the votes, as of a Nov. 6 report from the Walla Walla Union-Bulletin.

Swant took his loss in stride.

“Obviously the voters showed they thought they needed a change,” he said in an interview with the Union-Bulletin.

“I’m taking the numbers as validation that my message has resonated with county residents. Now it’s time to deliver on the message,” he said in the same article from the Union-Bulletin.

For the Walla Walla City Council, Positions 4 through 7 were up for election. This year for the first time, council members were elected via a ward-based system. Voters chose candidates to represent an East and West Ward, alongside two at-large members, according to a My Columbia Basin article.

“I couldn’t have asked for a better opponent,” Powell said in an interview with the Union-Bulletin.

Smiley-Nakonieczy expressed determination for her forthcoming tasks as a city council member.

“I am going to be reading a lot and looking at the data,” Smiley-Nakonieczy said in the same article in the Union-Bulletin.

Position 7, also an at-large seat, currently held by Steve Moss, was challenged by Julian Saturno. Moss was able to retain his seat with a 71 percent share of votes.

“I am excited to get all our heads together to make a dent in things,” Moss said to the Union-Bulletin.

Voter turnout in Walla Walla County for this election was initially suggested to be low after a first round of counts were conducted on Nov 6. The Union-Bulletin reported on Nov. 7 that, “Walla Walla County fell short of the statewide average with a turnout of just 21.03 percent.”

However, after another round of ballot counts, Walla Walla County Election Department officials noted an uptick in votes cast this year. According to a Nov. 10 Union-Bulletin article, David Valiant, the elections supervisor, “estimated that the county would garner somewhere around a 42 percent turnout.” He adds that voter turnout was stagnating on odd election years, with turnouts of 32 percent and 26 percent in 2013 and 2017 respectively.