Continuing the conversation on the Marcus Whitman statue 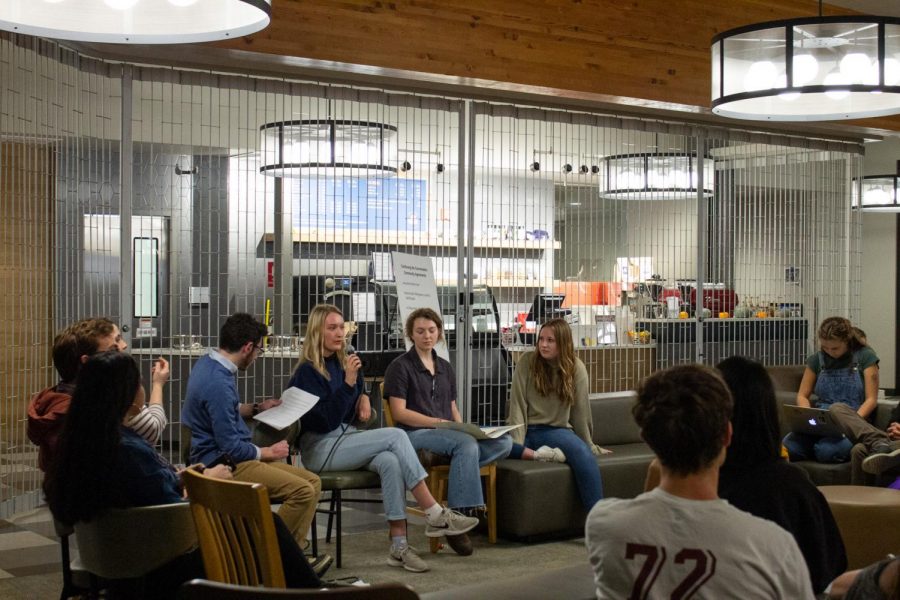 Seniors Andy Burnstein, Emma Patterson, Laura Jessich and Hope Giddings were a few of the students leading the discussion on the Marcus Whitman statue on Wednesday, Nov. 6.

Last Wednesday, Nov. 6, in the Jewett Cafe, Whitman Teaches the Movement (WTTM) and Continuing the Conversation co-hosted a student-led discussion on the Marcus Whitman statue and activism surrounding it. A panel of students from the Whitman Inclusion, Diversity and Equity committee (WIDE), Borders as Methods (BAM) and women from the Art History department (who published an op-ed in The Wire on Oct. 24), led the initial conversation, followed by smaller group discussions.

Senior and co-leader of WTTM Andy Burnstein was the primary organizer of the event. Following the series of vandalism demonstrations in September and October, President Kathy Murray sent out an email to the Whitman community calling for dialogue. Burnstein explains that the request for dialogue was a catalyst for creating this event as a platform for discussion.

“My hope [was] that [the discussion] being student-led would allow the people who participated to have ownership over the conversations that they had,” Burnstein said. “That having that feeling of ownership and accomplishment might lead them to some kind of positive action and organizing if they are so inclined.”

Sophomore Sam Kinzel finds significance in the fact that this discussion is student-led amidst a wider conversation that is oftentimes dominated by administration and faculty.

“It has become so difficult to have a dialogue with ‘adults’ or officials or the administration on campus,” Kinzel said. “There is a lack of trust or belief that they can actually do something and that they’re willing to do something and it feels like at this point it has to be from students. You don’t get a lot of structured spaces like that at Whitman and I want to see more of that.”

Sophomore Ameliz Price-Dominguez, a co-leader of WTTM and a member of the WIDE committee, described how these fragmented conversations belong to the larger issue of a lack of communication on campus.

“There’s already dialogue happening within specific communities and I hope that [this event] generates a campus-wide dialogue among students specifically because I think that there’s already a lot of disconnects as far as communication between the different entities on campus,” Price-Dominguez said. “If [this event] did anything to unify our voice as a collective as students then it accomplished its goal. And I hope that there will be a group of people that take up the call to action.”

Director of the Sheehan Gallery Daniel Forbes reflected the same sentiments of disconnect among groups across campus trying to work on this issue and an overall lack of organized action from the student body.

“[The Sheehan Gallery staff are] not in constant communication with the administration so we don’t know exactly what is necessarily going on in other branches of the institution, but for us, we had not received any student-generated petitions or anything formally regarding any concerns that they had. If this is something that the students feel very strongly about, there are ways that the students should be coming together to address these issues,” Forbes said. “[This sort of event] provides a forum where they can connect [so] they can be more coordinated in their efforts to start moving in the direction that they need to … move forward in ways that are hopefully more unified.”

As far as ways in which we can move forward, there are certain elements of this complex issue to consider prior to taking action.

“I think before any Whitman students come with ideas, a lot of these discussions lack indigenous voices specifically from the tribes that have relevance or connection to Marcus Whitman. We need to first consult the people of the CTUIR. There’s a wealth of resources there and we have a Memorandum of Understanding, so we have the structure in place to collaborate on something,” Kinzel said. “I think it’s necessary if you want to do this equitably and responsibly we’re going to consult with them. If you want to do something… it’s going to come from collaboration and we need to make sure that all parties are compensated, especially those that have expertise in this.”

Price-Dominguez echoed similar reminders in a cautious and conscientious inclusion of indigenous voices.

“As far as involving the CTUIR, I would love for them to be some part of it, but I think that along with that or even before that happens, we do need to — as a student body — take the responsibility on our shoulders and not turn to them and say ‘what do we do?'” Price-Dominguez said.

Forbes noted how this process can be tedious and discouraging, but that the nature of the issue requires long-term dedication.

“There are people who want to see something happen immediately. I don’t think that that’s realistic. It’s critical that we approach this issue in a way that is well-rounded so that multiple perspectives are considered,” Forbes said. “I know that people are frustrated because it doesn’t incline itself to immediacy. Activism is labor. If you’re going to be an activist it requires diligence and an effort and an investment on your part.”