First step towards composting at Whitman 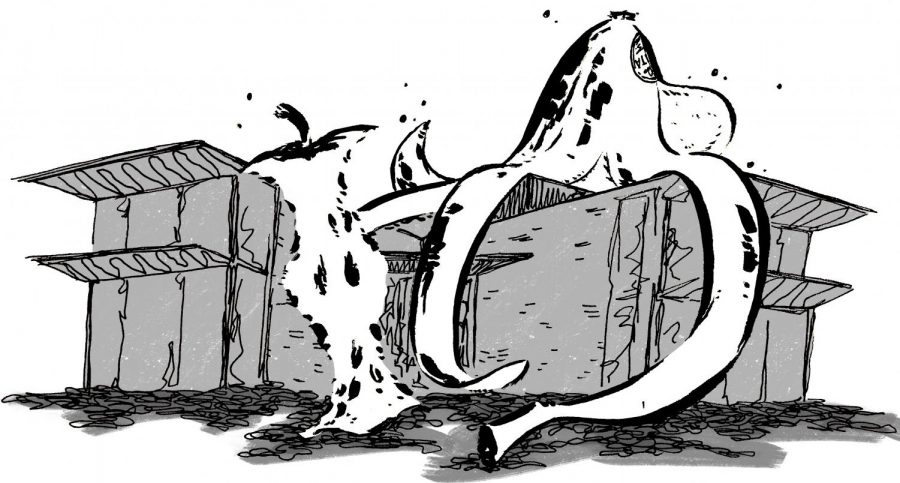 This number comes from a waste audit conducted by the Sustainability Office and Bon Appétit, who measured the compostable, post-production waste that arose from meal times.

The waste audit was an initial step in ultimately creating a compost system at Whitman. In order to identify the costs of developing and maintaining a compost system, it was necessary to retrieve data on how much food waste Whitman students produce on average in the dining halls.

The audit was initiated by the Whitman College Sustainability Office with a sum of student volunteers. One of the main student organizers involved with the waste audit, sophomore Jun Cai, noted how the partnership between Bon Appétit and Whitman students made this happen.

“Bon App was very cooperative in helping us throughout the audit process, lending us all their supplies and keeping track of their kitchen waste measurements,” Cai said.

Hulett agreed with Cai, explaining how his organization is in full support of sustainable efforts made by students.

“If the compost does get launched, we want to do whatever we can to help support the cause,” Hulett said.

The process of creating a Whitman compost facility is evidence of the high level of care Whitman students have for reducing waste in order to make a positive impact on the environment.

In order to cut down on waste, Cai gave students examples of what to do to reduce waste, including: using the green Eco-Takeouts instead of a disposable container, bringing a reusable mug for your coffee, using one of Cleveland’s plastic cups for smoothies and cold drinks if dining in, sending emails to the [free food] listserv ([email protected]) when you notice a catering event has concluded and there is lots of food leftover and asking for smaller portions if possible.

Elissa Brown added to Cai’s comments on how to cut down on waste. Brown has looked at how environmental impacts are a direct result of animal agriculture’s current role in our food systems, which emphasizes the importance of cutting down food waste.

“At Cleveland, we can minimize our food waste by choosing plant-based or vegan options, being mindful of serving sizes when we choose what to order and taking leftovers with us in an Eco-Takeouts container, which also eliminates waste from single-use disposables,” Brown said.

In order to help students with their individual efforts towards reducing waste, Cai wants to create a compost system that will ease this process. Cai has been interning for the Office of Sustainability in order to see what it would take for Whitman to be able to compost food waste.

“Jun’s work is building on the foundation of a proposal developed by students in 2017,” Brown said.

Cai’s proposal asks Whitman to consider creating a composting system since there are no options for composting services in the Walla Walla area. Brown spoke about how the waste audit has helped with this system.

“This waste audit is providing some of the necessary data to design a system that would be a good fit for Whitman and our community,” Brown said.

Cai presented the audit data and the compost proposal last Thursday, Oct. 24, to Whitman’s chief financial officer, Peter Harvey. Before any kind of budget is finalized, the Sustainability department will be working with the Physical Plant staff as well as an outside agency to determine what the composting system at Whitman would potentially look like. The addition of a composting system at Whitman is still in question as the Sustainability department is still very much in the exploratory phase of this process.

Some of the logistical questions that must take into account if Whitman chooses to create their own system include how much waste would need to be processed, the amount of labor required to transport that waste to the composter, how much compost Whitman would produce with the waste and what to do with the processed compost.

“According to Peter Harvey, all these steps will take some time, so the earliest construction can begin for the compost facility would be next summer,” Cai said.