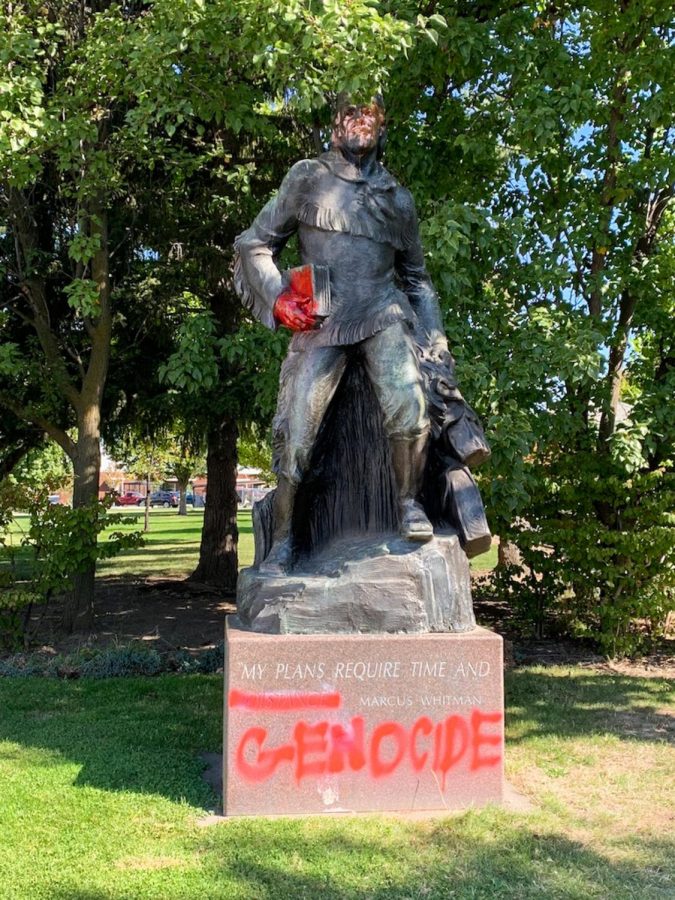 The Marcus Whitman statue on the edge of campus was spray-painted red multiple times in the weeks leading up to Columbus Day along with other messages scattered across Whitman campus. Photo contributed by Kaitlyn Patia

According to an email sent to The Wire by Chief Financial Officer Peter Harvey, the Marcus Whitman statue had been vandalized on Sept. 26, Oct. 2, Oct. 4 and Oct. 14.

The statue was presented to the City of Walla Walla in 1992 as a second replica of the original statue located in Washington D.C. and has been at the center of a number of controversies over the past few years. In 2019, there was a state senate vote to preserve the Marcus Whitman statues, and a previous instance of vandalism of the Marcus Whitman statue occurred concurrently with the defacement of a portrait of Narcissa Whitman in the fall of 2017.

Marcus and Narcissa Whitman were missionaries in the 1830s and 40s in what is now called the Walla Walla area. Controversy remains surrounding the Whitmans’ role in the colonization of the Cayuse people and symbols of their legacy.

Daniel Forbes, Director of the Sheehan Gallery and Adjunct Assistant Professor of Art, explained that the statue was used last year, along with a Maxey Museum exhibit about the Whitmans’ legacy, as a visual text in the first-year Encounters program.

Sophomore Nicki Caddell was one such student whose Encounters experience incorporated a visit to the museum and reflections on the continued presence of the statue.

“There’s a way in which I think that we could keep it as a historical artifact if it were recontextualized,” Caddell said. “I think it’s interesting where we choose to draw the line of what is art and what’s worth preserving and what’s worth changing. Couldn’t you argue that it’s equally as artistic to take something historical and recontextualize it through defacement to be a new piece of art?”

Em Perry, a sophomore art major, studied the statue in three different classes last year — Encounters, art history and an indigenous studies course — and still feels there is more to learn and discuss.

“In my Encounters class, we talked about [the statue] an okay amount, but I still feel like it was a lot more focused on analyzing the rhetoric of the statue itself as opposed to how that rhetoric relates to the history of the piece and the history of the space,” Perry said. “I think that both of those are valuable exercises, but if you want people to learn what is important to learn about that statue, you need to do both.”

The college responded to the actions surrounding the statue in an email to The Wire.

“In recent years, the college has increased efforts to make the complex history of the region a part of the curriculum, for example through the Encounters course,” the Office of Communications said. “Conversations about challenging ideas can lead to meaningful growth and a greater understanding of the issues in question. And while we support free speech on campus, vandalism, property damage and the defacement of public art are never acceptable. We hope our campus community can continue to engage in a productive dialogue going forward.”

President Kathy Murray echoed this statement in an email sent out to the Whitman community on Tuesday, Oct. 15.

“It goes without saying that the destruction of property that doesn’t belong to you is never acceptable. I understand that the history of the college’s namesake is complicated,” Murray said. “However, expressing feelings through vandalism is NOT productive. What is productive: dialogue. Conversations about challenging ideas can lead to a greater understanding for everyone involved. That cannot happen without talking and listening.”

Shortly after the email was sent, writing in chalk was found outside the Penrose Library. The chalk read, “STOP VANDALISM.”

As a staff member and steward of the art on campus, Forbes explained that he has an ethical obligation to protect the statue.

“We have pieces on this campus that have complex histories whose contents we might not necessarily agree with, but, in our position as staff people on campus, it’s our job to see that these objects, as long as the campus chooses to maintain them as part of their collection, are preserved,” Forbes said.

Regarding the recent vandalism, Forbes explained that there are ways that the conversation surrounding this statue could be brought into a more public arena.

“There are ways that people can engage and have conversations that would be much more potent, I think, than what has happened,” Forbes said. “There are all sorts of figures that could be created and put in conversation with the Marcus Whitman statue — there are performances that could be done, where again, the people who are upset about this could be visible and not opening themselves up to some sort of criminal action if caught.”

Associate Professor of Art History and Visual Culture Studies Lisa Uddin published an op-ed in The Wire last Thursday identifying a few of the ways in which Whitman, as a community, can progress in responding to the statue. These ways include simply removing the statue or keeping the statue and inviting public expressions of varying perspectives to interact with the it.

“We’re not going to accomplish, resolve or move forward with the problem that’s being enunciated through that protest if we fixate on whether it is vandalism or justified activism,” Uddin said in an interview with The Wire. “What’s happening — the sheer repetition of this phenomenon of defacing Whitman memorials — is that we, as a collective campus community, are confronting what Whitman means, what Whitman has meant and what Whitman could mean.”

Uddin wants to see the momentum behind conversations about incidents that challenge the presence of this statue to continue.

“I think the next step for students would be advocating for some kind of institutional, public, collective response and that means talking to each other and talking to our administrators and asking flat-out what’s possible,” she said.