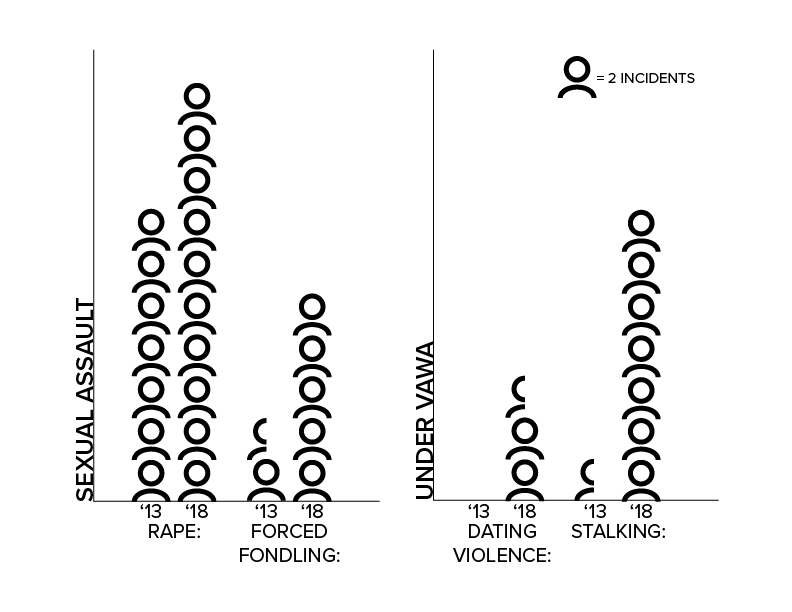 On Tuesday, Oct. 1, Whitman College released the 2019 Annual Security Report, in accordance with the Clery Act.

The Jeanne Clery Disclosure of Campus Security Policy and Campus Crime Statistics Act, or Clery Act, is a consumer protection law that requires the disclosure of campus crime policy and statistics.

This act was implemented in response to the widespread recognition of the under-reporting of college campus crimes, following the death of Jeanne Clery. In 1986, Clery, a 19-year-old student at Lehigh University, was raped and murdered in her dormitory by another student. The mandate was led by her parents, who had found grave deficiencies in Lehigh University’s campus security and in their reporting of campus safety — negligence that, in their opinion, gave way to Clery’s death.

The Clery Act requires federally-funded colleges across the U.S. to annually produce a security report and share it with their institution’s faculty and students.

This year’s report was sent out via an Oct. 1 “student digest” email — placed in-between messages promoting a kayaking trip and a Hispanic heritage dance. The report covers Whitman’s policies for sex and gender-based violence, alcohol, drug use, missing persons, etc., as well as statistics for reported campus crimes over the past three years.

Juli Dunn, Senior Associate Dean of Students and Title IX Coordinator, worked in conjunction with Director of Security Marvin Viney in producing this year’s report. One particular aspect of the report she highlights is how the report focuses on the “what, when and where” of crimes, but not the “who” — meaning that the report does not distinguish between crimes committed by Whitman and non-Whitman affiliates. Dunn emphasizes the importance of understanding the basis of the report’s statistics when interpreting them, in order to not make any false assumptions.

An example Dunn provides of this tackles the assumption that residence hall crimes would be exclusive to Whitman students.

“If you see something in a residence hall, or a crime committed within a residence hall — you can’t assume that that [crime] involves two students,” Dunn said. “You can pretty much assume that it involves [at least] one student, right. It’s very unusual that you’d have two non-Whitman people in a hall committing crimes against each other.”

Dunn further cautions students to avoid interpreting the report’s statistics out of the context of the report. She describes how a statistical increase in a particular crime does not necessarily indicate an actual increase in the committing of said crime, but more likely points to an improvement in the reporting of said crime. She mentions stalking and intimate partner violence as an example of crimes that Whitman started reporting several years ago, with reports increasing over the years.

Dunn also clarifies that the report should not be used to compare the relative safety of college campuses because each institution reports differently. She describes how in a security report nearly a decade ago, Whitman had reported eight [or so] crimes of sex and gender-based violence; however, the University of Washington had reported zero such crimes.

“This is an institution that is really big, significantly bigger than Whitman,” Dunn said. “The likelihood of [the University of Washington] having zero, just statistically, is not the case.”

Although Dunn explains that statistics can and should only be compared within an institution on a year-to-year basis, she acknowledges that a decrease in reported crimes, like an increase, does not necessarily indicate growth and progress in preventing crime. In terms of sex and gender-based violence on college campuses, Dunn mentions national figures that can be used as a baseline.