How is vaping regulated at Whitman? 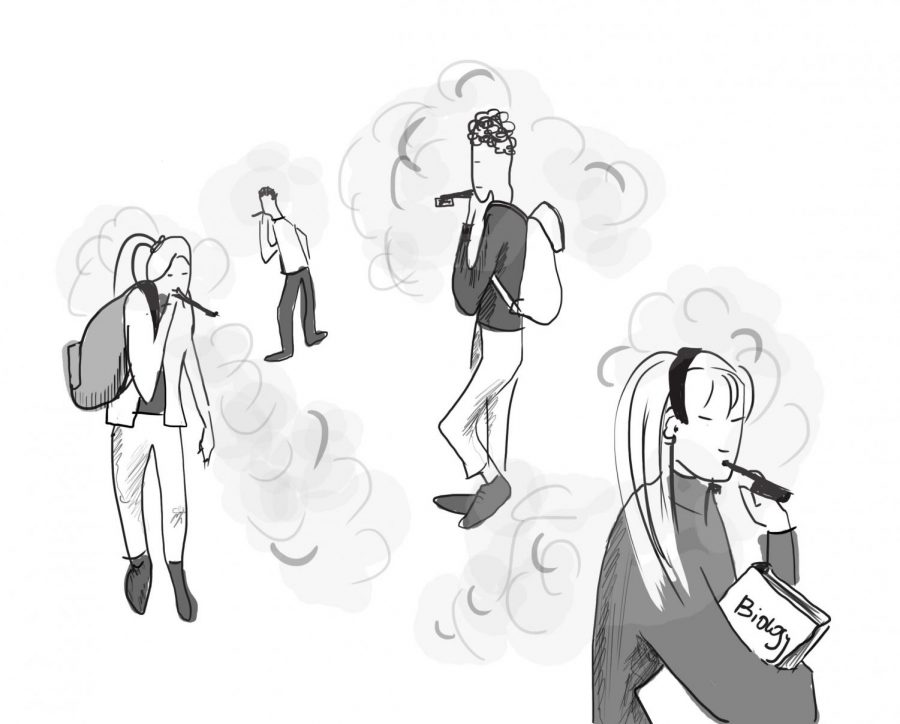 Since mid-August, vaping has been characterized as an epidemic following a spike in vape-related lung disease cases. At this point, vaping has resulted in 18 deaths alongside 1,000+ reported illnesses. On Sept. 27, Washington Gov. Jay Inslee called for an emergency ban on flavored vape products, which could go into effect if the State Board of Health chose to authorize the ban at their upcoming Oct. 9 meeting.

Whitman College has categorized vaping as a form of smoking, meaning that all smoking regulations apply to the act of vaping.

Jewett Hall Resident Director Zach Clark says that the Residence Life policy regarding vapes is quite simple; you can have it, but you can’t use it.

Clark recognizes the difficulty in fully enforcing smoking policies. Although he does mention that the pungent smells of vape, such as “cotton candy,” allow for easier detection of smoking, he also comments on the lack of willingness a student may have in respecting the ’25 feet’ rule.

“It definitely is tricky, and it certainly is happening in the building, I’m sure, because [vaping] is something that’s so addictive, that it’s not like [smokers] are going to go outside … every 10, 15 minutes to go smoke,” Clark said. “So I’m sure this is an ongoing problem.”

Tavelli reasserts the policy that an individual smoking must be at least 25 feet from a building, citing that it accords with Washington State law. She acknowledges that this policy could be altered if vaping were to be banned in the state of Washington or the city of Walla Walla.

Tavelli adds that education with regards to vaping is critical for students on campus. While she notes that vaping deaths have been attributed to the presence of THC and vitamin E, she also says that there’s a lot more to be learned.

“I don’t know how much education we’ve done — certainly it’s something we’ve talked about doing more in residence halls since students certainly are allowed to vape nicotine [outside their residence halls],” Tavelli said. “In terms of vaping, like cigarettes, probably something that we should talk about doing more — education — and all those statistics have really come out in the last month, so then it’d certainly [be] a good health campaign.”

In addition to education, Tavelli also recognizes the importance of changing the culture surrounding vaping. She states that increasing discourse on the dangers of vaping would be beneficial.

“Research shows that it isn’t too effective to do those types of campaigns — like saying ‘don’t do this, it’s bad for you,’” Tavelli said. “It isn’t always effective to say something’s bad for you, I mean, it seems obvious that [vaping’s] bad for you, but so are a lot of things. I’m just trying to make sure people are making informed decisions.”

Tavelli connects vaping to how smoking was perceived half a century ago.

“People know cigarettes are bad for you, but we have to remember [that] in the ‘50s and ‘60s, doctors advertised it, [so] people thought cigarettes were healthy — so sometimes, culture has to change. I think with vaping, that will be what will happen,” she said.

Jordan Bluett, a first-year student, states that there still isn’t enough scientific evidence for him to have a stance on vaping.

“As far as I can tell, the science isn’t really in on vaping — so I can’t make an educated opinion on the safety of it,” Bluett said.

Ben Kehrli, another first-year student, claims that the dangers of vaping are overstated — the real issue lies in its addictive nature. He describes how nicotine provides a “head-rush” that feels good, but also admits feeling regret over having picked up the habit.

“If I could do it all over again, I wouldn’t have started in the first place,” Kehrli said.

Kehrli adds that although vaping is not an issue at Whitman because students are old enough to make their own decisions, better options do need to be in place to help people quit vaping as opposed to simply banning it.

“More attention needs to be directed towards providing support for the addictive aspect of vaping,” Kehrli said.