Whitman College: Homebase for All 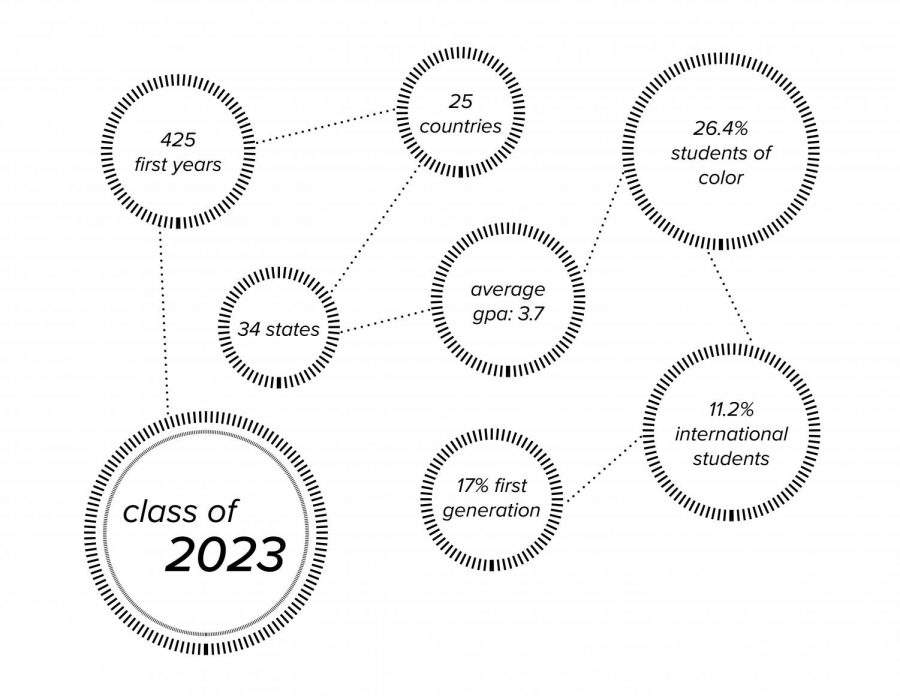 As Whitman’s class of 2023 finishes up their first month of college, they also make history as the institution’s most diverse class yet. 425 students make up this class, coming from 34 states and 25 countries. Over one in four first-years identifies as a student of color, 11.2 percent as international students and 17 percent as first-generation college students.

First-year Nomonde Nyathi ‘23 came to Whitman from Bulawayo, Zimbabwe. To her, the more diverse make-up of the first-year class is a step in the right direction for inclusivity on campus.

Vice President of Diversity and Inclusion Thomas Witherspoon matches her optimism for what this first-year class means for the Whitman community.

“I think it is really significant, not just for numbers on a piece of paper, [but for the] experiences being had here. I think it’s dialogue being had in classrooms…in clubs and student organizations,” Witherspoon said.

Director of Admissions Adam Miller describes how increasing diversity is a result of the efforts of the whole Whitman community.

“There are so many people, programs and policies behind this growth,” Miller said. “From the leadership of President Murray and the Board of Trustees in identifying strategic priorities tied to diversity to the tireless efforts of staff who work to make everyone at Whitman feel welcome and supported, to the faculty who create inclusive classroom spaces to the students who continue to advocate for a more diverse Whitman.”

Nyathi described international student orientation at Whitman as accommodating and well thought out. The small group sizes helped her get to know the other students and relate to their experiences.

“My orientation was pretty small; it was 15-19 international students and I liked that because then we were all able to build a really strong bond because we were able to have conversations with people that now I’m really close friends with,” Nyathi said.

In terms of the future of this demographic trend and whether these records will continue to be broken, Miller reflected that — with some inevitable ups and downs — the long-term trend of diversity has been increasing and will likely continue that way.

Witherspoon expresses the same hopes, making note of the amount of effort and passion required to sustain this goal.

“Honestly, I think college is up against [the trend of increasing diversity]. We’re going to have to do what we’ve done and do more.” Witherspoon said.

He adds that an increase in the diverse backgrounds of students has a long-term impact far beyond the Whitman community. The values that students gather and practice in their time at the campus are taken with them as they depart and go out into the world.

Miller emphasized similar ideas, highlighting the value that having a more diverse student body can bring to the local community.

“Most students who come to Whitman are involved in the community in some way during their time on campus, and many stay in town or return to Walla Walla at some point in their lives,” Miller said. “So a more diverse Whitman is part of adding to the diversity of Walla Walla.”

Current Whitman students also hold responsibility in promoting diversity here on campus. Witherspoon mentioned that one of his main goals is to help each student find a place where they can call home despite differences in background and experiences.

“Keep asking tough, interesting questions that actually matter to you. Make people stop and think about what they’re saying. If students did nothing else…the one thing I would say is just be kind to one another. Help each other. And help each other find that home base,” Witherspoon said. “I think just by students connecting other students to either people or programs or activities, that is the impetus of somebody finding their community that supports them. If students intentionally did that with just the people who they came in contact with, I think that we would have a much better community.”