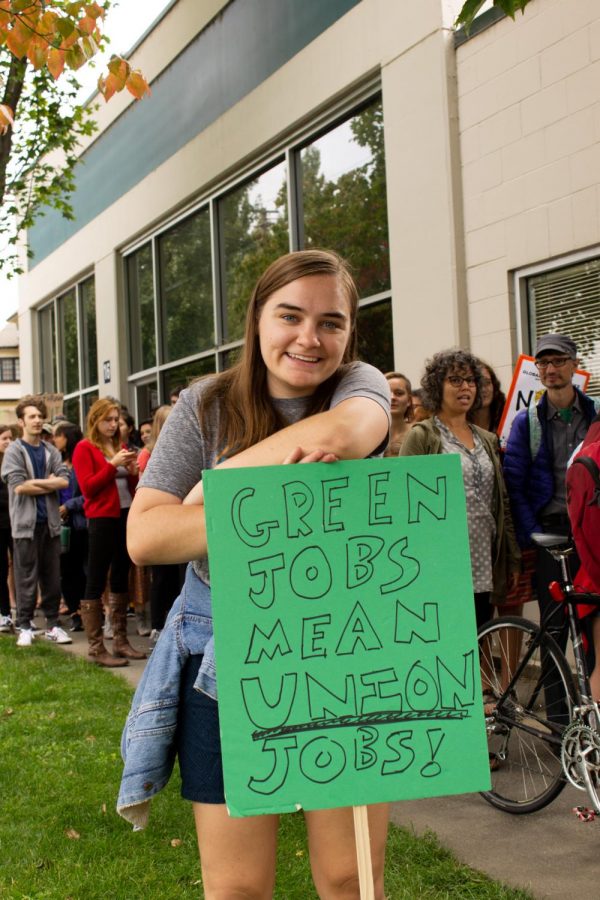 “Act Now, Time Is Running Out” was one of the many chants uttered at the Walla Walla climate strike that took place on Friday from noon until strikers began dispersing around 2 p.m.

The strike, organized primarily by students in connection with the Sunrise Movement Walla Walla, a local hub of the national youth-led movement, took place along with a host of worldwide strikes inspired by environmental activist Greta Thunberg.

Students from Whitman College, Walla Walla High School and Garrison Middle School participated in the strike along with other community members.

The strikers gathered at Whitman’s Memorial Hall building and marched through downtown to the Walla Walla County Courthouse where impassioned student and adult activists recited poems and speeches.

Matthew Marianacci, a Whitman Race and Ethnic Studies senior, helped organize the strike as well as form a series of demands — including phasing out fossil fuel vehicles and investing in renewable energy — that students involved in Sunrise Walla Walla plan to bring forth to the City Council.

According to Marianacci, the intent behind the strike was to disrupt normal routines of work and school as well as demonstrate the power in numbers.

“It’s a walkout because we want to disrupt the flow of everyday life,” Marianacci said. “In mainstream society we aren’t thinking about the climate crisis everyday [or] a lot of the time if it’s not being brought to our attention, or it’s in the news and we just don’t feel empowered about it.”

The strike, explained Marianacci, is part of the larger vision of Sunrise Walla Walla in organizing acts of non-cooperation.

“The idea that Sunrise is working towards is mass non-cooperation — basically disrupting the flow of work so that there has to be changes made,” Marianacci said. “We need to start planning for how we are going to change the way we live. So a strike like this is leading towards bigger and bigger acts of non-cooperation.”

Meg Duhr, one of the primary non-student strike organizers, played a large part in figuring out the logistics of the strike and explained that she believes in the importance of disrupting everyday routines in favor of addressing the climate crisis.

Duhr explained that while everyone able to was encouraged to participate in the strike, “it’s really about young people, especially folks that can’t even vote and [whose] future is being decided by people who are on the sidelines and not paying attention, or denying the science.”

Evelyn Sisk, who participated in the strike along with her peers from Walla Walla High School, said that her teachers were generally quite supportive of students walking out of class in order to participate.

“When it really comes down to it, it’s our lives that are going to be on the line,” Sisk said. “We want a future — we don’t want there to be no reason for an education.”