In The Cut: Activism and Fresh Fades 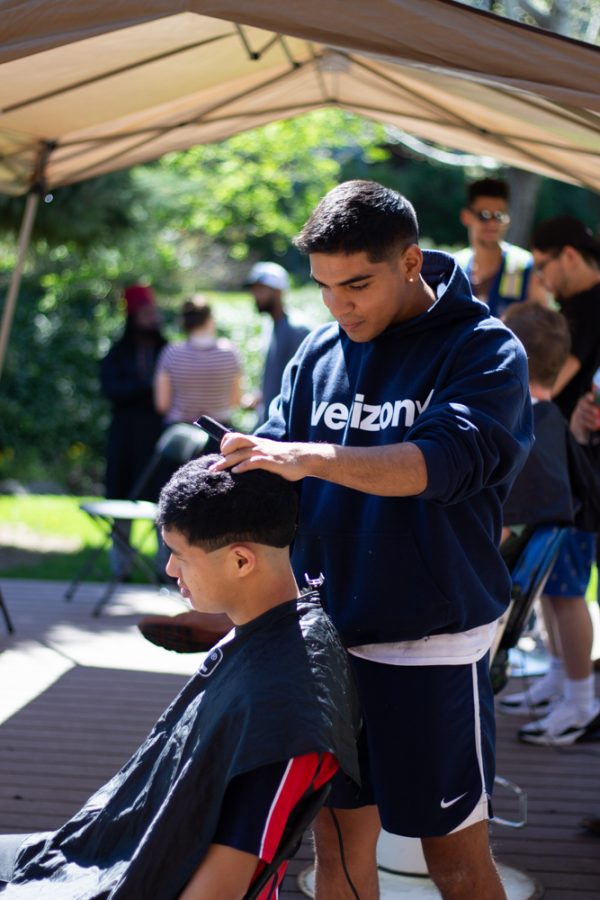 Members of the Whitman Men of Color Association host a barbershop on the Reid sidelawn, donating all proceeds to the Walla Walla Music Organization.

Men Of Color Association (MOCA) hosted a barbershop this Sunday, Apr. 21. All proceeds will go to the Walla Walla Music Organization. This was the first event which MOCA, a club organized last fall, has put on.

Jordon Crawford, who started MOCA at Whitman and largely organized the barbershop, hopes the barbershop will be hosted once a year or even once a semester in the future.

“As a black man, I have had so many struggles getting a haircut, being told that I have special hair so barbers don’t know how to cut my hair,” Crawford said. “At one [MOCA] meeting we were just like ‘Let’s have a barbershop.’ So we reached out to barbers of color in town, luckily there were three, and then we also reached out to some of our student barbers.”

Professional haircuts were $15 and amateur haircuts $12. Member of MOCA, Matthew Dahlstrom, volunteered as a student barber during the event. He also cuts his own and others’ hair year round.

“When I came to college I liked having my hair really short, pretty fresh, all the time and it was getting too expensive to pay for haircuts every two weeks,” Dahlstrom said. “The real improvement started when I started cutting my own hair probably every week, just to get good, and so people could trust me [to cut their hair.]”

The barbershop lasted from 11 a.m. to 3 p.m. on the Reid side lawn. Walla Walla Music Organization, which proceeds from the barbershop will support, provides Digital Music Production and Audio Engineering classes at the Walla Walla Public Library for middle and high school students and, most recently, for students at Walla Walla Community College.

Founder of Walla Walla Music Organization, Rodney Outlaw, studied Audio Engineering at the Conservatory of Recording Arts and Sciences and hopes to make audio engineering skills available to youth in Walla Walla without the financial barriers.

“Walla Walla music organization is not trying to create the next big pop star, or rock star, I’m trying to teach people to go to the news channel and run audio and get benefits and a stable salary,” Outlaw said. “Because the pop artist that blows up, that makes that racket, they’ve got to use compression, EQ, limiters, gates. When we listen to the news on our TV, whoever is running that sound from the broadcast truck is using EQ, compression, limiters, gates.”

Outlaw started the Walla Walla Music Organization at Lincoln High School with twelve kids and two production setups. He has now expanded to the public library which has 12 setups and is open to students throughout Walla Walla. He teaches everything from how the temperature affects the way sound waves travel to how to file copyright forms to protect music.

“[I] started teaching [my students] the skill set and what happened was we started watching their behaviors change,” Outlaw said. “So instead of them getting aggressive and frustrated and making a bad choice they went to carrying notebooks and writing more, they started coming to class and creating instrumentals more, to reflect whatever they were feeling in the moment that they were trying to get across and [the program] just kinda grew from there.”

Part of MOCA raising funds for the Walla Walla Music Organization is the club trying to increase the activist presence of men of color on campus.

“A lot of times activism, especially around social justice, we mostly see women of color putting in that work and as a man of color I was in the minority and I thought ‘What the hell? That sucks, this should not be a gendered work,’” Crawford said. “I envisioned this club as a way for men of color not to just show up but to act up, and to sort of equalize that work load for women of color. So really it’s a support system for women of color. It’s support in the fight for equity and it’s just to bring out the voices of men of color… because a lot of times we stay in the background.”

MOCA also provides a place for men of color to connect on campus. Senior Segun Sodipo has met students through MOCA that he wouldn’t have connected with otherwise.