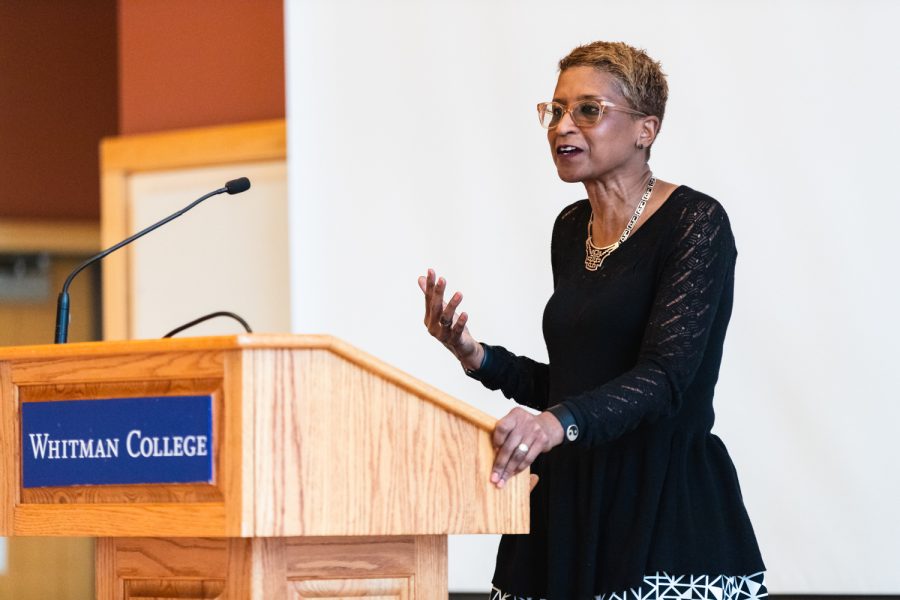 “It’s urgent and heady to have a conversation about women in leadership — roadblocks and inroads, steps forward and back, progress and setbacks and at the end of the day what it means to be a woman leader and what it should mean,” Paula Boggs, keynote speaker at the Women in Leadership lunch, said in her opening remarks.

The 2019 Women in Leadership Lunch, hosted by the Student Engagement Center on Friday Mar. 29, brought together local women leaders (many of them Whitman alumni) and Whitman students to hear from Boggs, followed by conversation and networking.

Thirteen years after her inaugural speech for the first Women, Leadership, and Society lecture, Boggs’ return to Whitman gave her an opportunity to share her own leadership strategies, drawing on her experiences as a veteran, vice president at Dell Corporation, executive vice president, general counsel at Starbucks Corporation, frontwoman of the Paula Boggs Band, and many others.

She presented three points for effective leadership. This rendered the process easily broken down into a highly achievable method of management.

“One: Leaders serve; it’s not about you. Two: No matter how good a leader you are, you can get better. Three: Most colleges, including Whitman, offer leadership opportunities and anyone can be a leader,” Boggs said.

Her first point references “servant leadership,” originally coined by Robert K. Greenleaf in 1970 following his research in authoritarian leadership and its problems. Boggs wasn’t introduced to the term until she joined Starbucks in 2002, and has practiced it ever since then.

“In ‘servant leadership’ the main goal is to serve,” Boggs said. “A servant leader shares power, puts the needs of others first and helps those she leads develop and perform as highly as possible… It’s a style of leadership that requires active listening, collaboration, finding win-win, transparency and community.”

The idea of servant leadership was new to many of the attendants at the lunch, including first-year Annie Means.

“I hadn’t thought about leadership in those terms [before] and that kind of changed my perspective about it in a way that will probably really help me down the road,” Means said.

Boggs’ second point on effective leadership draws on the idea that practice makes perfect (or at least significantly better).

“Like mastering any music scale or honing a bicep through weight training, the skills that make one a great and effective leader take practice and intentionality,” Boggs said. “As we [women] seek out opportunities to lead and they come, we must exercise those leadership muscles that make us stronger and better at it… I am a better leader today because through practice I learned how to be both courageous and trust my people.”

Boggs’ last recommendation for effective leadership is to take advantage of the setting we find ourselves in: Whitman College. She referenced her experience founding the women’s cross-country team at her alma mater, Johns Hopkins University, as an example of the importance of female solidarity and seizing opportunities.

“It is the purest and most powerful example of women helping women, across generations, in my lifetime and it started when I was a college freshman,” Boggs said of the cross country team. “There are many [similar] opportunities for student leadership at Whitman. Reading President Murray’s welcome letter taught me [that] 70 percent of you volunteer in the community, nearly 150 internships were awarded last year and 80 percent of students play intramural sports. That suggests to me no limit. That suggests to me opportunity to lead.”

Boggs’ experience at the Women in Leadership Lunch left her with a profound sense of just those values aforementioned.

“I received in [the] room a powerful sense of sisterhood,” Boggs said. “This is kind of a petri dish for the leaders of tomorrow.”

She wasn’t the only one who sensed the solidarity at the lunch. Senior Sarah Rothschild was also left with a feeling of unity.

“[Everyone who attended] contributed to a very warm and encouraging environment of women and allies supporting women and celebrating each other’s accomplishments and potential,” Rothschild said in an email to The Wire. “It reassured me that when I encounter obstacles in my career in the future, I know that I will always have people to support me and a community of strong female role models to look up to.”

Boggs’ model of leadership is transferable across many different fields, and she finds great importance in the diversity of it in that way, especially as someone who has held a myriad of different professional roles.

“The opportunities and challenges of being leader aren’t terribly different across being a team captain, a student council president, a platoon leader, leading a global organization, in a place like Starbucks, or leading a band,” Boggs said.

The variety of careers experienced by Boggs was well reflected by the number and range of women professionals in the room during the lunch itself, an inspiring portion of the experience for Rothschild.

“I really loved listening to the diversity of professions represented by the women who were invited to the luncheon,” Rothschild said in an email to The Wire. “It was very inspiring to hear from so many women who hold influential leadership roles in their occupations, which helped me appreciate the incredible amount of ambition and initiative required for them to excel in their careers.”

For Boggs, leadership is a process and can be found in many different formats, but most importantly, it is absolutely necessary — and it it crucial that women join this faction of the professional sphere.

“I and our nation need you to flex and grow those leadership muscles. There has never been a time more important in our country for inspired leadership,” Boggs said. “It’s in America’s best interest to harness your leadership talent, and as a nation we can ill afford to write off over half of us.”