Update on Debate: Off to the Quarterfinals 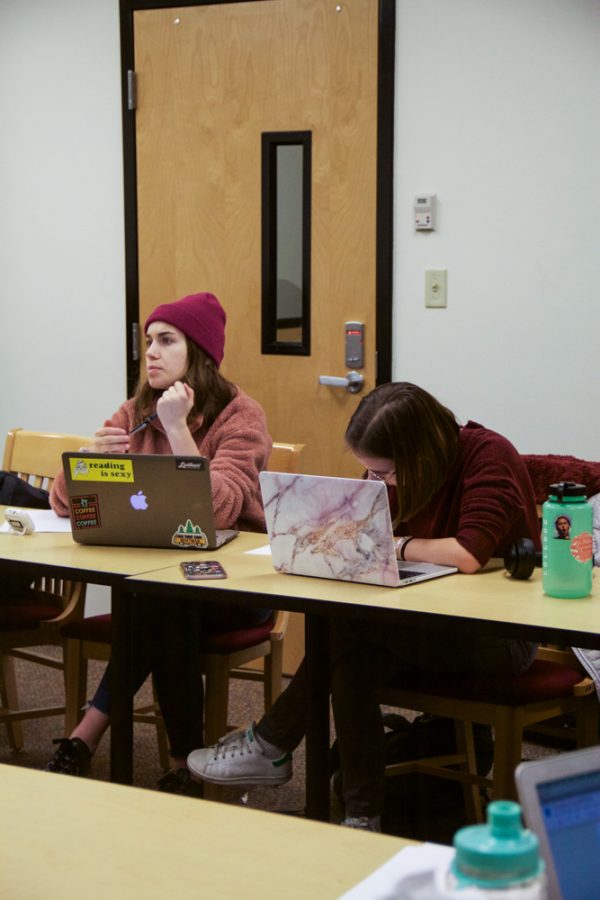 Whitman Debate Team in Maxey Hall preparing for a tournament.

From Jan. 25 to Jan. 28, Whitman’s Debate Team competed at the Viking Invitational in Bellingham, WA. Each partnership competed for four rounds each. The teams are then eliminated based off of the number of wins from the rounds. At this tournament, two partnerships reached quarterfinals, the farthest they’ve reached this year. The team had the most wins they’ve ever had.

First-year Ally Wait was thrilled with the team’s success.

“I was just so happy for everyone who was making it, because they’ve worked super hard,” Wait said. “At the beginning of the last semester, we were kind of all losing together, and it was disheartening, because we knew that we were doing the right things, but we had to do all the right things at the same time… It’s been exciting to see that we’re starting to win together, too.”

The wins come after a three-year suspension of the debate team. The team started back up last semester, with new students and coaches.

Director of Debate Lauran Schaefer was amazed by the speed of improvement for the team.

“It’s relatively rare for a team of our size, without any experience to have that much success in a small period of time,” Schaefer said.

“[Schaefer is] so protective of the team, and wants us to win because she knows we are capable of it. She can be hard on us, but in a good way,” Wait said. “She really pushes us to be better.”

The Assistant Director of Debate, Baker Weilert, also believes that the team’s progress is due to their own application to the work.

“I think for the first time, they saw how their work translated into their success directly. The work they put in is what won them that round,” Weilert said.

Several students won speaker awards, an accolade for the best speakers at the tournament. First-year Grace Fashanu earned the 12th speaker in the entire tournament. Her partner, Reeve Boyer won 20th speaker, and Jordon Crawford won 23rd speaker. Crawford and his debate partner, Michael Rubsamen, along with Fashanu and Boyer, advanced to quarterfinals in open rounds.

This tournament was the third time Grace Fashanu debated in open rounds.

“We’re really proud of ourselves, because it’s a lot of improvement from when we started debating,” Fashanu said.

“It’s a ton of work, and a big time commitment, and sometimes it’s exhausting, and it takes a lot of your mental energy… so it is definitely challenging, but I think that that’s what’s so rewarding — I’m proud to spend my time on [it],” Fashanu said.

Due to the emotionally taxing nature of debate, Schaefer has hired a counselor.

“You get students [debating] about issues like racism that very personally affects some students and doesn’t affect others,” Schaefer said. “So there’s never an unpacking of that conversation because when you’re debating about race it means someone has to win at the end of the round, and that’s not really helpful if you don’t have conversations where there’s not a winner and a loser.”

The team talks with the counselor about the competition afterwards, and can set up one on one conversations. Students on the team can also talk to coaches about issues that arose. The team actively works to support each other, as well.

“We’re kind of like a family,” Wait said. “So it’s a lot more motivating to actually win, ‘cause we want to make our family proud.”