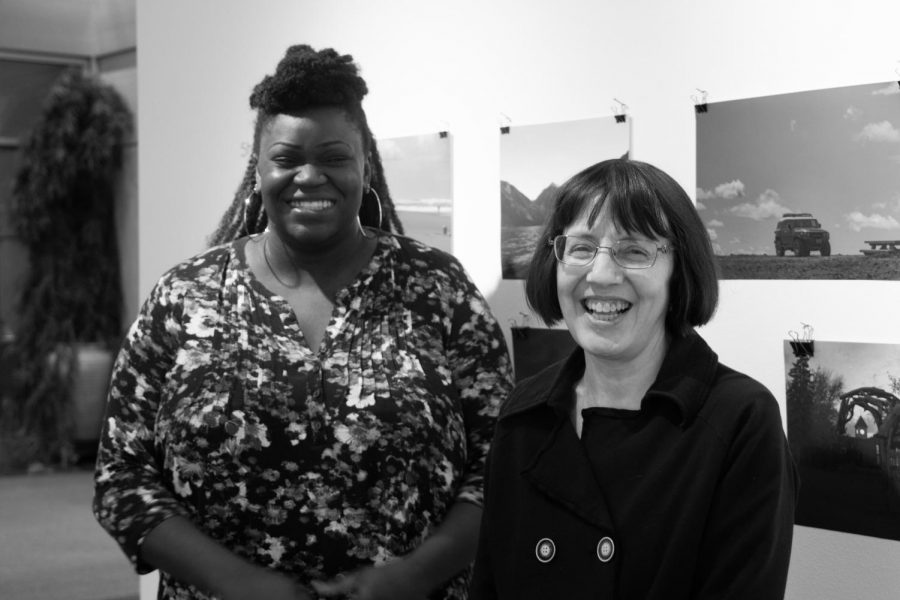 Funmi Oyekunle and Barbara Maxwell spoke about about the process of developing a new pre-orientation that is accessible to more first-year students.

This past week Dean of Students Barbara Maxwell hosted informational sessions about ‘Explorations,’ the new pre-orientation program that will be piloted this coming Fall.

Many Whitman students fondly remember their own pre-orientation experience, the first real exposure to the next four years of their lives. Until now, there have been two options: Scrambles, the weeklong outdoor-oriented trip in which a few returning upperclassmen lead an eager group of 10-12 incoming first-years on excursions throughout the region, and the Summer Community OutReach Excursion (SCORE), which hosts group trips to different destinations in Walla Walla, and aims to help incoming students engage with local social issues, explore service organizations in the community and meet some other first-years as well.

This next Fall, Whitman will be hosting a new pre-orientation program named ‘Explorations’ as a pilot program. Unlike Scrambles or SCORE, new students in Explorations will be housed on Whitman’s campus but will still adventure out into Walla Walla to carry out various activities. Also unlike Scrambles or SCORE, the theme of Explorations is not predetermined by the administration but is decided by returning students during the prior school year, who submit a proposal inspired by a passion or interest of theirs. With the help of Whitman administration, the student leaders then plan the four to five day program.

Barbara Maxwell, the Associate Dean of Students and director of orientation programs at Whitman, spoke about the benefits of these programs.

“Students who participate in small group experiences like Scrambles, SCORE and fall athletics really have the opportunity to come back and a form tight-knit, connected group of students so that when the on-campus orientation begins, they feel like, ‘hey, I’ve already made some friends’… and their sense of connection and belonging is much higher,” Maxwell said.

Scrambles and SCORE are important programs for incoming students, but unfortunately only around half of incoming first-years are able to experience these programs. Thus far, Whitman has not been able to expand the programs due to capacity issues and the significant financial investment of these programs prevents many students from participating.

Freshman Gaby Ceniceros, who was able to participate in both a SCORE and a Scramble because of scholarships granted by Whitman and outside sources, spoke about her own experience with SCORE in particular helping her social transition.

“My friends from SCORE are the friends I still hang out with, a little bit more than Scrambles, I guess because we have more common interests,” Ceniceros said.

According to the Campus Climate Survey conducted in 2016 on Whitman’s campus, 20 percent of students, faculty and staff reported that, “they personally had experienced exclusionary, intimidating, offensive, and/or hostile conduct” (as presented by Rankin and Associates in the Fall of 2016). For a college with a total enrollment of less than 1500, and specifically of the 1089 faculty, staff and students that responded to the Campus Climate Survey, the number is striking.

In light of this and other discussions by the administration aimed at improving the sense of community and belonging on campus, Whitman aims to make one of these pre-orientation trips, Scrambles, SCORE or Explorations, part of orientation in the future, and to allow all students to participate free of charge. Other liberal arts colleges around the country already have similar orientation programs, such as the Priddy Experience that is included in Colorado College’s orientation.

In addition to helping Whitman in looking forward to a more inclusive first-year orientation, Explorations will give new students exposure to Walla Walla that they may not otherwise get as overwhelmed first-year students. Kazi Joshua, the Interim Dean of Students, extolled this benefit of the program.

“[Explorations will be] a way of really exposing you to the world, outside of Whitman, right, when you come to Whitman for orientation… it can be overwhelming [with] just the intensity of information you are given in those three or four days, and so then you start school… and so in some ways, your first semester or two, you’re just confined to Whitman,” Joshua said. “This will have opened you up… so you’re putting Whitman in the context of where it is.”

College can be exhausting for students, and these pre-orientation and orientation programs can alleviate anxiety for new students and help returning students engage with the campus community.

Funmi Oyekunle, the Assistant Director of Student Activities, spoke about what she envisions for all Whitman students’ college experience.

“We know that for a lot of students, whether they’re the first in their family to graduate, or whether they are trying to navigate imposter syndrome when they’re coming to college, we just really want to create an avenue where they feel like they belong, and where they deserve to be visible and to take up space,” Oyekunle said.