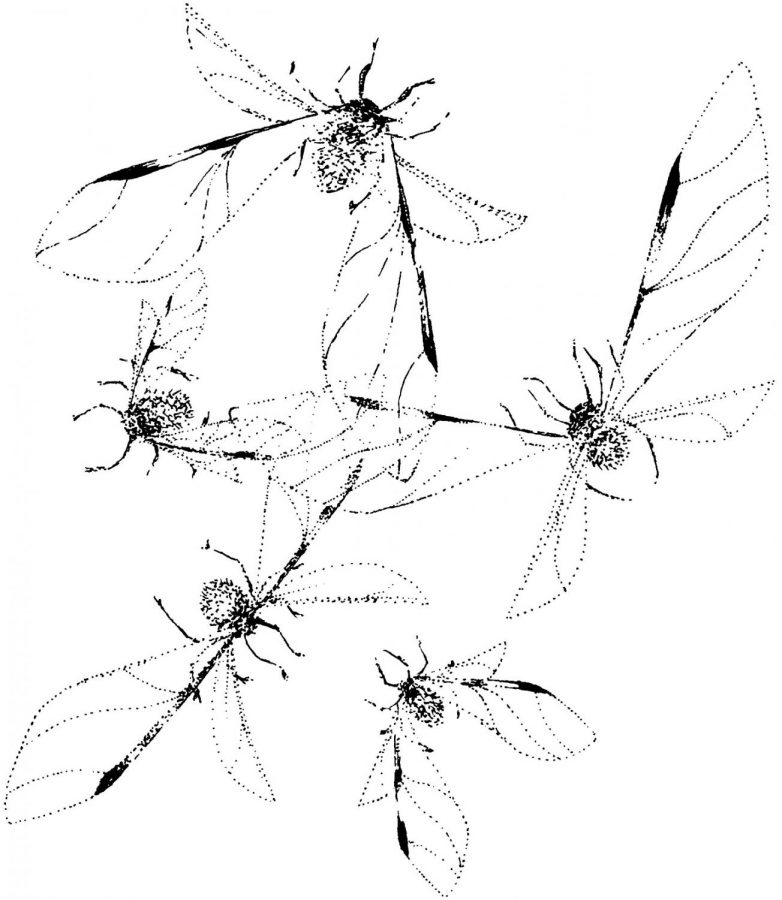 Fall has arrived in Walla Walla, and with it, so have the thousands of ‘woolly’ blue ash aphids. Commonly encountered above sidewalks, these blue ash aphids are a regional phenomenon that have invoked passionate responses from students this fall — both annoyed and enamored.

Scott Nonweiler ‘20 lives off-campus, and has been negatively affected by the aphids on his daily commutes to class.

“These bugs have most definitely been a nuisance to me. I will be walking along and they just fly into my eyeballs and they’re so small that when I blink because of that, I crush them and then I’m trying to fish this bug out of my eye,” Nonweiler said.

“At one point I walked into my house and looked in the mirror and there was a crushed one on my lip. It’s just disgusting,” he added.

Aphids like these are easy to crush without intending to, as they are invertebrates. This has made running, biking, and even walking a task appropriate for goggles. This was Nonweiler’s greatest complaint.

“I would not be sad if they were not there … They do look pretty when the light is coming in, but then I have to walk through them and I inhale five of them, and then I don’t like them anymore,” Nonweiler said.

However, there are other students who find the aphids to be a source of seasonal wonder.

Thomas Meinzen ‘19 said, “I am a true believer in the value of the Woolly Aphid, not only for aesthetic qualities, especially in the evening time when the sunlight streams through between the trees and illuminates these wonderful clouds of floating golden ephemera, but they’re also beautiful on the small scale. If you look at them very closely they have a nice little fluffiness, which is pretty unique in the insect world, and they’re even soft.”

Meinzen is an Environmental Humanities senior, and has been witness to the seasonal presence of the bugs — as well as common negative responses to the bugs from peers — in his previous Fall semesters at Whitman.

Of the many features Meinzen enjoys about the aphids, he also sees their autumn appearances as highly beneficial to pedestrians.

“Another wonderful thing about them is that they do encourage you to move a little slowly and pay attention… it’s always good to be a little more present, even if it’s the fear of squishing insects that motivates that!”

The sudden influx in the aphids is seen seasonally throughout the inland northwest, and has been explained by experts in many parts of the region.

In a 2010 article, Carol Mack of Washington State University wrote, “For most of the summer these aphids have been living underground, sucking the juice from fir tree roots. During this time, they have multiplied asexually… In the fall, male and female winged forms emerge from the ground and mate and lay eggs in the crevasses of the ash tree bark.”

So the aphids spent the summer cloning themselves, but now they swarm in hopes of finding a seasonal mate. Aphids usually have two host plants in their annual cycles, and these blue ash aphids reside in this region because of the abundance of both fir and ash trees.

As you continue to traverse through Walla Walla’s fall, see these insects as a reminder that we are surrounded by beautiful trees!

Finally, the author offered final words of advice, saying, “close your eyes and pull your T-shirt up over your mouth to keep from choking as you pass through a swarm.”