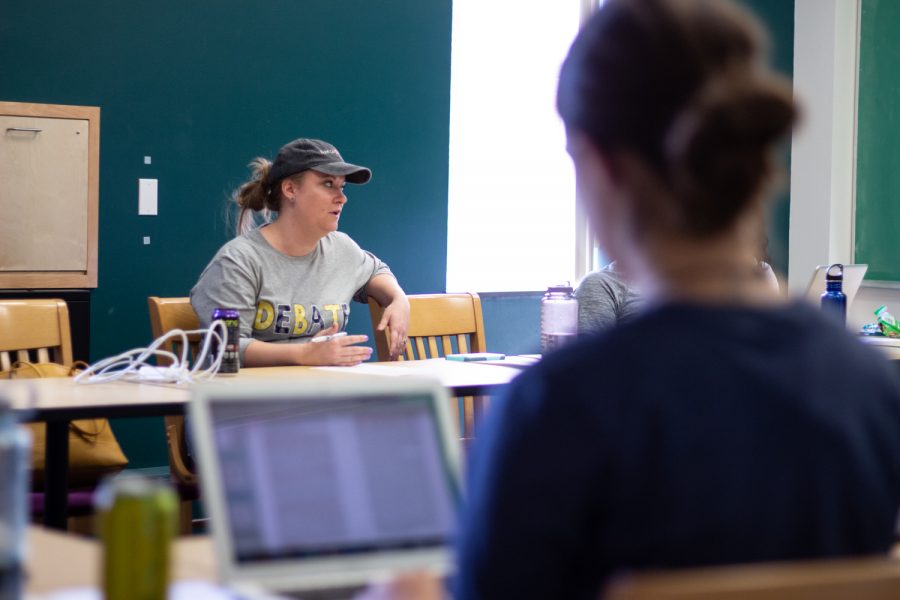 Debate returns after suspension. Two debate partnerships advanced to the quarterfinals in most recent tournament.

Debate at Whitman is back. The team was suspended in the spring of 2015 for violating team and school policies. These included alcohol violations at a tournament and allegations of gender discrimination and safety concerns. With the completion of the two year suspension, the team begins anew with a new coach and team.

“It’s weird being on a team that’s new, but it’s kind of a gift because you get to see the construction of a collegiate debate team when it was taken away as a right, and now it’s a privilege to have it,” first year Michael Rubsamen said. “We have a very different frame of mindset than what other teams have … we have completely brand new people, brand new coach and brand new mentality.”

Rubsamen competed in debate throughout high school, placing within the top 15 at state his senior year. However, most of the team has less experience.

“Most of us are relatively new this year … we’ve done some sort of debate, but not this kind that we’re doing currently,” sophomore Onika Dikeledi said. “I’m purely new, never done debate before.”

Debate coach Luaran Schaefer talked to Dikeledi, an orientation leader, during orientation weekend and invited her to join the team. After one practice, Dikeledi knew it was something she wanted to continue.

“We get to talk about really important issues trying to, I guess, hypothetically solve issues that are literally happening in the world currently,” Dikeledi said. “So it’s discussing topics that generally I would want to talk about.”

As a potential politics major, Dikeledi also finds that debate overlaps with many of her classes.

“I take a US politics class and so a lot from that class is helping me understand parliamentary debate because it talks about senate and congress and things like that,” she said. “What I talk about in debate I could use in my politics class.”

Schaefer wants to foster this compatibility between debate and academics.

“First and foremost, my primary goal is making sure that debate is not interfering with, but enhancing [team members’] education at Whitman,” Schaefer said. “Put simply, I know that Whitman students are incredibly smart and what they are learning in their classrooms with their professors will help them win debates.”

However, debate still requires a large time investment outside of the classroom. Every Friday the team meets for three hours to practice. Each debate partnership is also expected to meet outside of practice once a week to debate with another partnership. Tournaments usually entail missing class days.

For this past tournament at William Jewell college in Missouri, the team left on Thursday and didn’t return until Monday. They began the tournament with seven preliminary rounds to mixed success.

“The rounds that we lost in our opinion were very, very close, we were not swept,” Rubsamen said. “But we did learn a lot about the intricacies of how you can win argumentation in the sense that you have to think about arguments differently than when you have them in person.”

Two of Whitman’s debate partnerships advanced to the quarterfinals but were assigned to compete against each other. Instead of debating their team members, Rubsamen and his partner Jordan Crawford walked up to compete in finals.

“We ended up winning the novice bracket which was cool but it was a tough road to get there,” Rubsamen said.

The team’s next tournament happens in mid-October at Lewis and Clark college in Oregon. The team will continue to practice and cement the basics of parliamentary debate between now and then.

“We’re kinda all over the place, we’re still trying to figure out what the fuck is going on,” Dikeledi said.

Schaefer has confidence that they’ll catch on quickly.

“I’ve been telling the debaters since the first time I watched a practice round that they are far ahead of the average novice debater,” Schaefer said. “I’m not sure if they see all the progress they’ve made in a few short weeks, but suffice it to say I’m in constant amazement watching them learn together.”

Schaefer began debating her first year of high school. Before coming to Whitman she coached at Texas Tech University and then William Jewell College. While starting a new team is different from Schaefer’s previous experience, she’s ready.

“I love everything about what I do, and I am genuinely just as excited to mentor and coach students through wins as I am to help them through losses,” Schaefer said. “I am also excited to watch them help each other through arguments or strategies, learn to prepare themselves for debate rounds, to watch them laugh at all sorts of things, including jokes about memes I don’t understand, and to bond throughout this inaugural season of the debate team.”