From Biology to History: Arch Releases First Book on Whaling in Japan 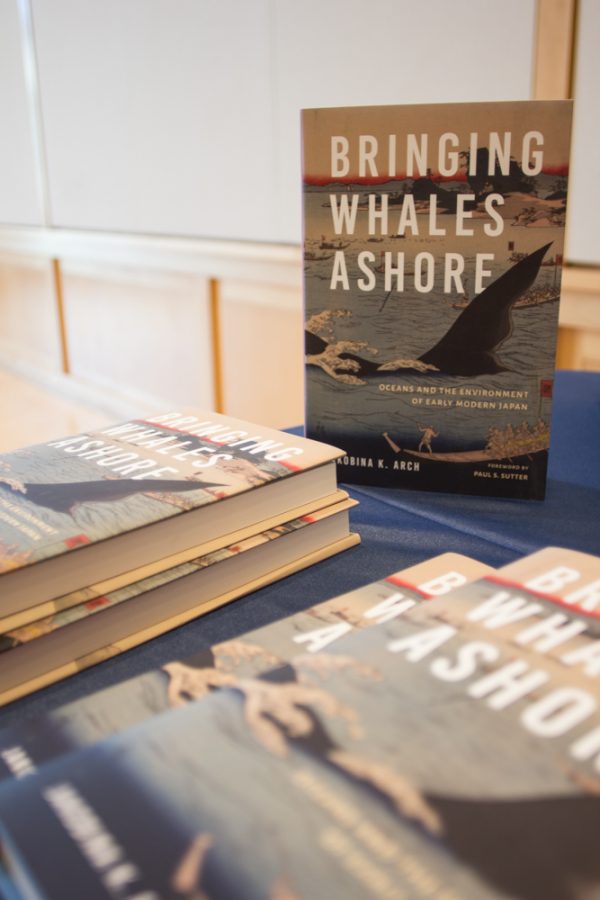 Whitman Wire: What originally led you to your interest in environmental history and specifically whaling in that region of East Asia?

Professor Arch: I was originally a biologist, so I was studying whale behavior in graduate school and I realized that it was not actually the kind of research that I wanted to be doing, but I really enjoyed teaching. And so I thought okay, well I still want to be a professor but the complications of running field work was not really my favorite part of it. So I ended up finishing off with a biology master’s and then kind of going back to work and just kind of thinking for a while about what I wanted to do. I was interested in the history of science because that was a relatively clear connection with what I had already done – thinking about how people of different countries had different ideas of natural history. How did they organize their world and deal with understanding how animals and plants and everything work? And Japan was particularly interesting to me because they had, at the end of the nineteenth century, imported a whole bunch of biologists to kind of teach them modern biology. How did that interface with the science that they already had? Even though it wasn’t Western science, it still was a system of knowledge that must have had some influence, and so when I went back to grad school I was thinking that I was going to do history in this topic.

WW: Could you tell me a bit about your new book?

PA: It is a marine environmental history of whales in Japan. I’m looking at tracing the interactions between people and whales in a very broadly defined way. That includes people and imaginary whales – how did they tell stories about them even if they’re not real whales? [It’s about] the whaling industry and all the different parts of that. But by tracing this interaction between humans and whales, I’m also thinking not just about, “Oh so what’s the history of whaling?” but also about what this tells us about the importance of the marine environment in the Tokugawa period (1603-1868). Generally, we think, “Oh this is a closed period,” but there’s plenty of research that says it wasn’t completely closed off to foreigners. There was a government policy where Japanese people were not supposed to go abroad. They’re not supposed to be too far out into the ocean and so people kind of assume that, well, the ocean isn’t going to be that important because they weren’t going there. And in maritime history in general, people tend to assume that it’s about shipping connections and/or naval history. And if they don’t have a navy and they’re not shipping abroad, what could they possibly be doing with the ocean?

And so this is also the period when specialized whaling as an actual business started. How does that happen in a period when the ocean supposedly isn’t important? And so by looking at this one group of animals and the industry that’s hunting them and collecting them and bringing them into general Japanese society, we can start to see that the ocean and the various marine resources within it were important in this period. And so that’s what got me sort of interested in this as a marine environmental history and not just the kind of whaling history. Plus, it’s a continuation of the work that I did for my dissertation; it’s a rewritten dissertation, which is often what people do in history for their first book.

WW: Would you mind talking about your whaling class at Whitman?

PA: I do a Pacific whaling history course and I’m going to be using the book in it next fall. I taught the course while I was rewriting and I was like, “Wow there’s no text for this” – now I’ve got a couple different books that can actually be used in the course. It’s very exciting.

I do find it feels a little weird to bring my own research into class … But I’ve actually found that it’s more fun that way for students to be able to see [that] this information doesn’t come from nowhere. That these are actual people who are writing this stuff down and that you know we are trying to read critically and to say, “Well do I agree with this person’s argument? And where did they get their evidence?” A student who’s reading some of this stuff and can ask me directly: ‘Well why didn’t you include this or how come this is a big part of it and not this other part?” …  So I found it to be very useful to try to build in connections to the kinds of things I’m interested in my research, and to think about what directions I want my courses to go. I do think that it’s something that I didn’t see as much as an undergraduate: the connection between what I was taking for classes and the kinds of research that these scholars who were teaching the classes were doing.