March For Their Lives 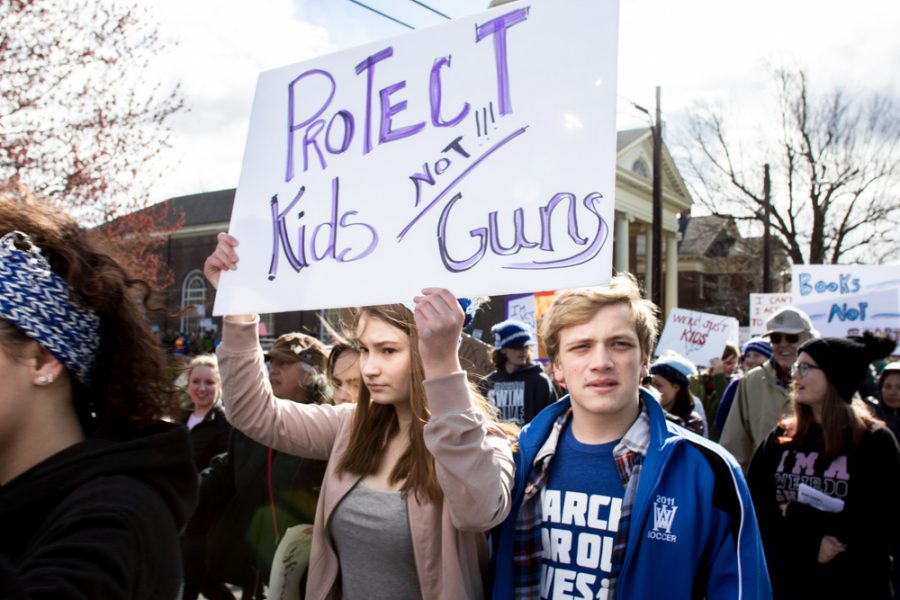 Members of the Walla Walla community joined the local high school and many other high schools and supporters around the country for the March For Our Lives on Saturday, March 24th as a response to the Stoneman Douglas High School shooting. The local march was organized by a group of students from Walla Walla High School to protest gun violence in schools. The event opened with a public address by organizer Emma Case and a speech by Grace Steelman, another student organizer. Supporters marched around downtown Walla Walla.

The following are quotes from Walla Walla High School organizers.

Why and how did you get involved?

I initially became involved with the March for Our Lives movement through reporting, as I’m a journalist. My editor in Oakland came to me and asked me what my town was doing with it (she knows we are a fairly conservative-minded region), and at that point we were just chatting about it casually, wondering how we could join the movement, but maybe not march because that would be difficult to organize. However, within a couple days, we’d had a meeting, and had convinced each other that the only way to participate to the extent we felt was necessary would be to organize a completely student-lead march.

What are you expecting of this event?

Personally, I am hoping that we can show our representatives that, even though the voter count may be deceiving, their youth isn’t happy with the way things are, and we are going to push until something changes for the better.

As a group, I think our hope is that this will unite the different voices calling out for change into one more concentrated movement, rather than several smaller groups within our region with slightly different messages.

What are the biggest challenges you faced in the process of organizing the march?

Quite literally, the biggest challenge was finding someone who would insure us. Due to the controversial, political nature of the march, and the fact that its organizers were high schoolers, every single insurance company we went to in town turned us away. We ended up finding someone in Spokane who helped us out, and our insurance came through at the last possible minute, the day we needed to have it in by.

Another big hurdle we had to cross was the disunity from the community, particularly from adults who wanted to support us. We found it sort of hilarious that, as high schoolers, we managed to organize a national-scale movement with less drama than the grownups. We’re proud of that. However, we would’ve had a much harder time doing this without immense support from countless people in our community.

I got involved in this march through my friends who had been reached out to my fellow communities members. I am involved with this march because I feel strongly about school safety and gun reform and I want to do what I can to make my voice heard and make a change. From this event, I am expecting and hoping for adults and law makers to understand what we want and that a change will be made following the March for Our Lives.  The most challenging part of helping coordinate this event was being under the eye of our communities adults. This is something very controversial and many of our community members don’t support this.

I got involved in the march through the Wa-Hi club I helped found, Girls’ League. We discussed taking action regarding gun violence in wake of the shooting in Parkland, and decided a march would be the best course of action. A strong group of students came together to plan the march, which was really powerful.

We are expecting a lot of community support at this event. It has been amazing to see how much our community has supported us so far- on facebook, and in our fundraising campaigns. We also expect to see a lot of students at the march. This issue of gun violence is one that intimately affects anyone who attends a school, and I think people are realizing that. Gun control does not to be a partisan issue, and the support we have received from people in our community from all walks of life really goes to show that.

The biggest challenge we faced in this process of planning the march was finding insurance coverage. The city required insurance in order to approve our permit, and after reaching out to ten local insurance agencies, we were rejected from each one due to the “high risk” and “political” nature of the march. We found insurance at the very last minute, thanks to Rea Culwell, a local lawyer. She reached out to an insurance agency in Spokane, who were willing to insure us. However, even after we found the insurance, it was extremely expensive. Fortunately, we received incredible generous donations from many community members on our GoFundMe page and through Bonfire T-Shirt sales, which allowed us to cover the cost of police protection and insurance.

I got involved through a Girls League meeting that was attended by one of the organizers of the Women’s March (although the club is completely uninvolved). I decided to insert myself into the organization process because it’s a great opportunity to learn to work effectively with others and because this is a very prevalent issue, not only to me but to my community.

I’m not expecting much more than a big local turnout. It’s unreasonable to think that this one event will change anything. But hopefully all of the events nationwide will open legislator’s eyes to the truth that change needs to happen now.

The most challenging part for me was finalizing the police escort. After I had turned in the request I didn’t hear back from them. After finding out that both of the officers in charge of scheduling off duty gigs were on days off I resorted to calling the police Captain. He told me that requests are automatically approved so I had been worrying for no reason! The lack of communication was just naturally frustrating to me.

Why and how did you get involved?

I am on the senatorial board for a club at Walla Walla High School that my friends and I started last year called Girls’ League. We focus on social justice advocacy at our school and in the community and the issue of stronger gun regulation is definitely something that needs to be advocated for. The March was brought up in Girls’ League, but is completely separate and my fellow high schoolers that feel passionate about the issue decided that a March should definitely happen in Walla Walla and that it would be very impactful if conducted by high school students.

What are you expecting of this event?

I am expecting a lot of people in the Walla Walla community to turn out for this event. I think it is an issue that matters to a lot of people, especially students and teachers. We will also have a lot of students registering to vote at the end of the March.

What are the biggest challenges you faced in the process of organizing the march?

I would say finding insurance was really difficult because we, as organizers, are all pretty young. We received a lot of advice and help from the Walla Walla community though, so we managed to get a lot done and are thankful for that.