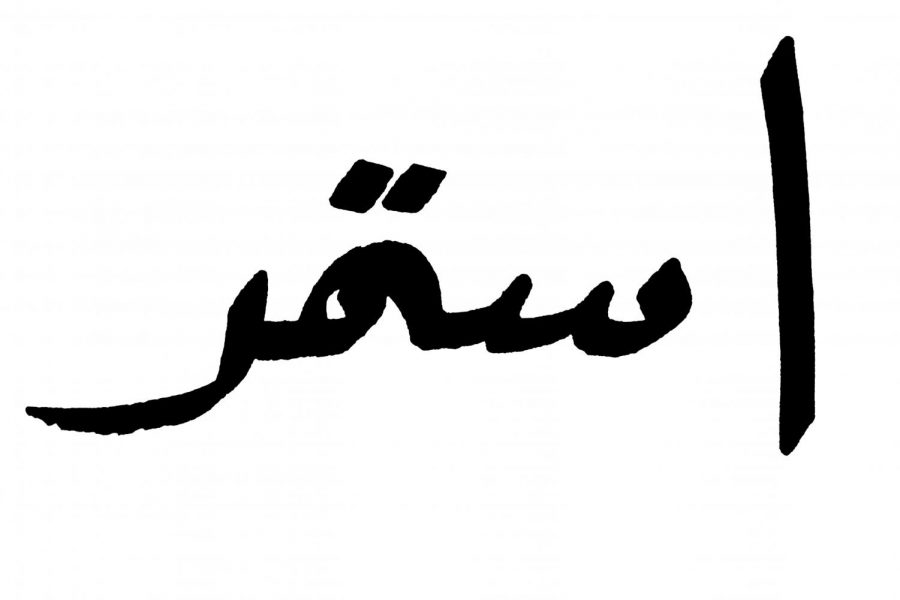 This translates to "continue," with regards to the continuing commitment of faculty and students for the development of an Arabic program at Whitman. Text contributed by Bash Haidar.

Nicholas, a senior senator of ASWC, has since received 454 responses to her first question where 321 students expressed support for a potential program. Her second question received 423 reponses where 180 students expressed desires to take an Arabic class. This, along with data from a similar survey sent out in 2012, which received 231 student responses in support of the program and 150 student responses to enrolling in Arabic course, made it clear to Nicholas that “people clearly give a damn about this.”

Upon arriving home from a spring semester abroad in Morocco, Nicholas was motivated to continue her study of Arabic. But without a program present at Whitman to support her endeavors, she has since turned to advocating for the revival of Arabic courses, last offered in spring 2011.

“Through talking with a lot of other students who studied abroad, I found that a lot of people were really disappointed that they gained the intensive Arabic skills and came back and had no opportunity to practice” said Nicholas.

Not only do students not feel they can hone their Arabic skills once they arrive back on campus, some students also go abroad with the specific intention of learning Arabic.

Ben Freedman, a senior politics and philosophy major, studied abroad in Jordan primarily to learn Arabic. “I would totally take an Arabic class if it was here, but Whitman doesn’t have it. So I decided I was going to go abroad and learn it on my own experientially… I taught myself the alphabet before I left [for Jordan] and that was it.”

Alzada Tipton, Provost and Dean of Faculty since 2016, weighed in on why there is no current Arabic course offering. “The primary reason is a lack of student demand. The numbers of students in Arabic courses that were offered before I got here were very low, and so I felt like those were not sustainable classes.”

Whitman has had an on-and-off offering of Arabic courses since its first appearance from 2007 to 2008 when it was taught by Robert Morrison, an Associate Professor or Religion. In the four years following, Elementary and Intermediate Arabic were taught by visiting professors Mona Hashish, from ‘08 to ‘09, with it being last taught by Shoukri Abed, from ‘10 to ‘11.

Elyse Semerdjian, Associate Professor of Islamic World/Middle East History, cites the reason for the current lack of Arabic courses as its low priority. “There has always been an overwhelming amount of student interest in the language and, until recently, none of our competitor schools in the region offered Arabic. Now, those schools have Arabic offerings.”

In Washington State schools such as Lewis and Clark and most recently University of Puget Sound offer Arabic courses. Of the Panel of Thirteen, which is a group of colleges in competition with Whitman including Kenyon, Occidental and Colby, only Whitman and Rhodes College do not offer Arabic courses.

“Of the variety of languages Whitman has, I’m surprised Arabic isn’t one of them. And I think it’s kind of a shame,” said Freedman.

Many faculty members and students alike believe Arabic to be a morally important language to learn now.

“Learning Arabic can open much-needed dialogue between Americans and the Arab World.  This must be considered in the context of deep cultural misunderstandings, stereotypes, and animosity over the last 17 years since 9/11 and the perpetual War on Terror,” said Semerdjian.

“Morally, I think that [Arabic] is really important because in the post 9/11 era, there’s so much hatred towards Arab people in our country. I feel like liberal arts colleges have an obligation to offer a counter to that language of hate by allowing people to engage with these cultures in a meaningful way,” said Nicholas.

Beyond morals, however, lay monetary hurdles. “When we think about a tenure track employee, and we’re thinking about salary and benefits, that takes us to over a hundred thousand dollars,” said Tipton. With other funding, for research and sabbatical, that number could rise to somewhere in the middle of one hundred to two hundred thousand dollars.

For Tipton an Arabic program does not seem feasible. Under the Board of Trustees’ plan to reach a student-faculty ratio of 10:1, using resources on this program would mean fewer resources for other courses already experiencing faculty cuts.

“It would be difficult for me to look at other departments in the eye — departments that have pressing current needs because of the large number of students interested in them — and say that we’re going to prioritize [an Arabic program] over your current situation,” said Tipton.

Brian Dott, Director of Asian & Middle Eastern Studies (AMES), thinks an Arabic program would greatly benefit the AMES major. A couple of years ago the AMES major was reorganized with a hope that Arabic would become a permanent position. But, in the present moment, Dott also recognizes that language courses now are under enrolled, making it difficult to argue for an additional program. He believes it best if the college focuses energy on its existing areas of study.

Dott also has ideas about the future of language courses at Whitman. “It might be useful to explore whether or not the student body supports having the college develop a language requirement for graduation.”

Nicholas recognizes that the likelihood of developing an Arabic program in the near future is slim, but hopes that Whitman will consider the possibility in the long term.

“I’ve been told time and time again that this is the least likely thing to happen, which is totally fair. I know this is literally the worst time. And faculty are rightly anxious right now,” Nicholas said in reference to cuts of tenure track positions. “What I’m hoping for is something more like a 5 or 10-year action plan that wouldn’t necessarily need to take place now… The college has gone through a variety of economic stages during the last 10 years, so hopefully in the next 10 years there will be some point when people will be like, ‘yeah we have the stability to do that.’”