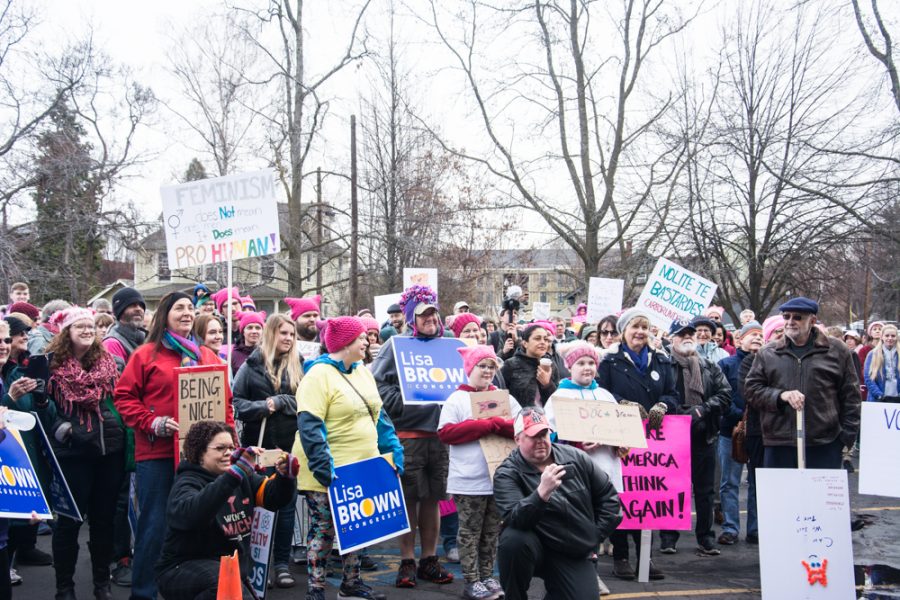 On Saturday, Jan. 20, over 2,000 people participated in the Women’s March On Walla Walla to commemorate the one-year anniversary of the Women’s March on Washington. The welcoming rally began in the parking lot of the First Congregational Church at 10 a.m. Signs bobbed amongst the crowd with quips like “Men of Quality Do Not Fear Equality,” “Save Our National Parks! Impeach Trump! Fire Zinke,” “Smash the Capitalist Patriarchy,” “Racist Shithole President” and “Our Lives Begin to End the Day We Become Silent About Things That Matter.” Amidst some light morning showers, marchers listened to the speeches of four local activists before marching west along Alder St.

The speeches at the rally–which were presented in both Spanish and English–provided a variety of perspectives and ranged in subject from sexual assault survivors advocacy to immigration rights, LGBTQ rights, and the experience of growing up as a young woman in Walla Walla.

March organizer Nancy Monacelli reflected on the past year since the Women’s March on Washington and told the Union-Bulletin, “In our community, we’ve elected another woman to our city Council … [and] there are dozens of women running for gubernatorial positions across the nation. We’ve seen the rise of the #MeToo movement … That is all an indirect result of the energy we saw at the march last year.”

Monacelli emphasized her commitment to making the event nonpartisan and also said that the Women’s March On Walla Walla was not affiliated with either Women’s March Inc. or March On, the top national organizations advocating for similar marches across the country on Jan. 20 and 21, the weekend that some are now calling the Weekend of Women.

Recent articles in the New York Times and Refinery29 have highlighted the struggle for cohesion and unity between national organizations whose overlapping missions have led to some confusion for local organizers seeking support from the larger movement.

On Jan. 18, March On issued a statement regarding its position: “From the beginning, we have applauded the continued work of Women’s March, Inc., the national group that planned the Women’s March On Washington. Their inspirational work on social and racial justice issues truly paints a picture of the kind of America and world that March On strives for. March On has chosen to focus on elections, which is a different, and complementary, path to the same goal,” the statement said.

Not only does the movement have internal disagreement, it also has internal debates about the inclusivity of certain symbols and icons. Before Saturday’s march, Lily Parker (‘19), Co-President of Feminists Advocating Change and Empowerment (FACE), spoke about one of these challenges.

“We had a couple of trans people in FACE who [said], ‘I think the Pussy Power signs are so cool, but I feel so excluded by [them], which was something that I … as a cis-gender woman [hadn’t] thought about before,” Parker said. “I think as long as it’s intersectional and inclusive, [the Women’s March] is a positive space.”

Women’s March on Walla Walla organizer Nancy Monacelli told The Wire that she was pleased with the turnout and overall solidarity.

“It is my hope that our participants came away encouraged and re-invigorated to stand together on behalf of those who are marginalized,” Monacelli said. “We have a diverse community and in that diversity is our strength as a community, a state and a nation. We have learned from history that attempting to squelch that diversity has really deleterious effects on our ability to live up to our ideals and our potential.”

Though each marcher had a unique reason for attending, many participants seemed to share common sentiments about the power of simply showing up in solidarity.

Duran was in the hospital during the 2017 Women’s March and was unable to participate. But last weekend they and their partner Dez’Mon Fair marched under the banner “Respeta Mi Existencia o Espera Resistencia” (Respect My Existence or Expect Resistance).

“It takes something bad to happen for people to really snap out of complacency,” Fair said in an interview. “Trump is so embarrassing and so hilarious, but he’s also so penetrating [to] the soul … That penetration that we’re all feeling–that shock–is really doing something for all of us and [as president] Hillary Clinton would probably have put us back to sleep,” Fair said. “He’s a truth America has to face.”

Noah Leavitt, Director of the Student Engagement Center at Whitman College, spoke about his hopes for the future. Carrying a sign proclaiming, “Just Another Dad Trying to Raise Feminist Kids,” Leavitt and his 9-year-old son, Ari Kim-Leavitt, participated in Saturday’s march. “As a parent, it’s so important to be thinking about the world our kids are heading into … Our kids have to understand from a very early age that we treat people the same, we think about them the same, they share the same opportunities whatever [their] background,” Leavitt said.

“[I’m here] to march for women’s rights because everyone should have equal rights,” Kim-Leavitt said.