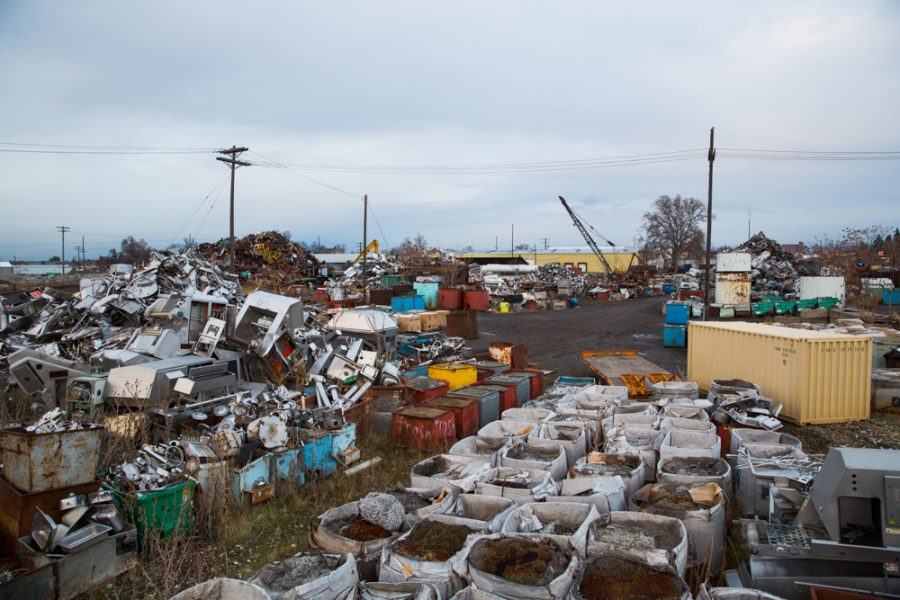 China currently processes the vast majority of the West Coast’s recycling, including the recycling from Whitman and Walla Walla. However, by the end of 2017, China will no longer accept some types of plastics and all but the best sorted and cleaned recycled goods. For Whitman, this has meant that recycling has become more expensive, possibly to the point where recycling is more expensive than sending materials to a landfill.

The recent change in what counts as recycling has also left local recycling companies scrambling as their warehouses fill with material that is now considered trash. Local governments are working with states to reconfigure the recycling system in order to keep recyclables that are currently being collected from being set to landfills.

Because the U.S. runs a trade deficit with China, container ships offer discounts on their return trip back to China to fill the empty space. This made shipping the recycling almost 6,000 miles across the Pacific cheaper than sending recycling by train to U.S. recycling processors. As a result, large scale material recovery facilities are few and far between on the West Coast.

One of the issues that sparked the recent change in policy is that recyclable goods are often mixed and cannot be easily or cheaply separated. For example, flat container lids that are put in mixed recycling collection bin usually cannot be separated from paper. When this happens, recycling is said to be contaminated, and it becomes more difficult to process and reuse. China’s rule change drops the acceptable level of contamination to 0.3 percent, which is not an attainable goal for many local processors.

Brandon Bishop is the Campus Sustainability Coordinator, and part of his job includes managing the campus recycling and waste collection. “The recycling that Whitman collects has a large contamination rate, typically 30 to 60 percent. This is often because there is food waste on the recycling or people include non-recyclables such as mixed materials, chip bags, etc.” Bishop said. As a result, Whitman employs a halftime staff member to separate the waste by hand in order to drop the contamination rate.

While there are some initial added costs to recycling, many of these costs can be earned back. “Last year, Whitman recycling income was $3,450, and as of October of this year we are only at $925,” Bishop said. Compared to last year, this year’s recycling income is down due to price fluctuations in the commodities market for raw materials. Ever since China announced their restrictions for recyclables, the prices for recycled goods has fallen into the negative, meaning it costs to get rid of them. “The reason that there isn’t a market for a lot of the commodities in the U.S. is because a few years ago many municipalities went from having a sorted stream coming from households—pure materials that could be sold—to a single stream [of mixed recycling] to make it easier on the user. That increased the cost on the sale-end to sort and process the materials, and many processors in the U.S. went out of business,” Bishop said.

“Right now, it’s still more expensive to take our waste to the landfill. The landfill rate for material is around of $85 per ton right now, whereas, it can cost around $50 a ton for material recycling,” Bishop said. However, there are concerns that recycling rates could rise if Walla Walla Recycling Center—which bundles and ships Walla Walla Valley’s recycling—has difficulty finding a recycling processor to fill the role Chinese facilities had played.

Genean Wrisley is a junior at Whitman and the Director of the ASWC Sustainability Committee. She sees an opportunity for something good to come from China’s policy shift, “If the change means that the U.S. starts internal recycling infrastructure, it’s probably the best thing that could have happened. A lot of people are looking at this with a negative perspective, but, with time and work, this could be a positive change.”

In the meantime, China’s policy change might serve as an impetus to better separate recycling before collection and reduce contamination. “The city [of Walla Walla]  is working on a campaign to educated the public about contamination. The college also needs to get to a lower contamination threshold or what we collect cannot be sold,” Bishop said. Still, it is important to note that recycling requires large amounts of energy and resources and that it only slightly mitigates the environmental costs of consumption.

“The way a typical plastic breaks down is that it breaks into tiny pieces. A recent study found that 80% of tap water in the U.S. contained microplastics, and microplastic levels are increasing in the oceans.” Bishop explained. “There is not a fantastic solution for replacing or recycling plastics. Recycling should really be a choice of last resort; the consumption part is the more important piece. Reducing consumption and reusing products saves a far greater amount of energy resources than recycling. The law of thermodynamics simply doesn’t allow you to turn one thing into another without any energy.”