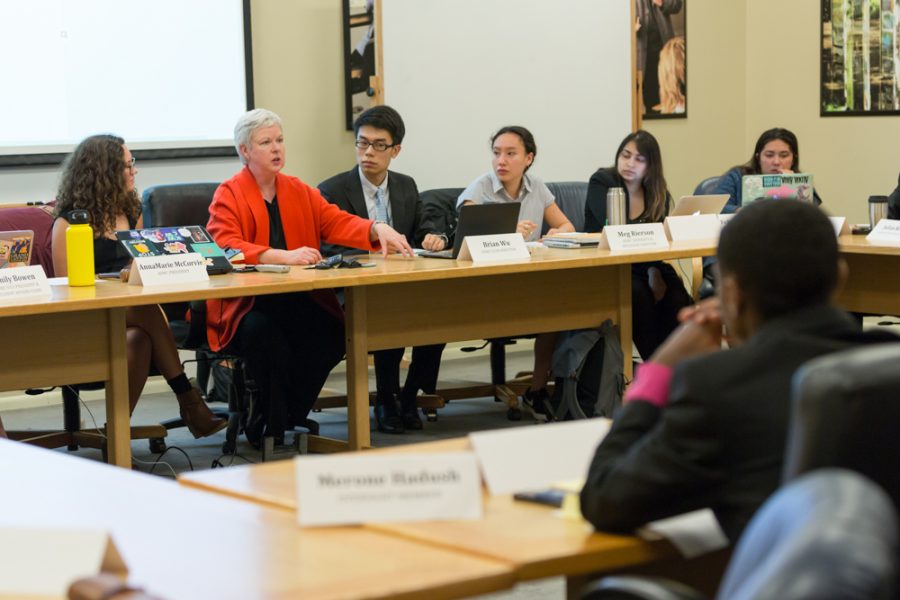 ASWC has yet to make a decision on a piece of legislation that would make the Director of Diversity and Inclusion a voting member. Legislation has been drafted, support gained, but no decision has been made. Nearing the end of the first formal Senate discussion on the issue, which occurred this past Sunday, the idea of holding a referendum was introduced. This would allow the entire student body to participate. However, as the debate appeared to reach no timely conclusion, McCorvie encouraged Senators not to vote in order to leave, but rather to table the issue until more debate could occur at a reasonable hour.

In years past, it has been up to the student body president to create a position for Executive Council. Former President, Arthur Shemitz, created the Director of Diversity and Inclusion. The position was made permanent in a session last Spring. Current President AnnaMarie McCorvie appointed Senior Politics Major, Meg Rierson, to serve as this year’s Director of Diversity and Inclusion. On the top of Rierson’s agenda is to make the position a voting member of the Senate. Voting members in ASWC have all been elected by the body which they represent, that is, first-year senators are elected by first-years and sophomore senators by sophomores and so on. With this in mind, Rierson set out to change the nature of the position from appointed to elected as a pretext to making the position a voting member.

For Rierson, the main motivation for this change was that the vote would be the voice for students who “don’t have a seat at the table.” “It looks bad”, Rierson said, “for the Director of Diversity and Inclusion to not be a voting member.”

The biggest challenge for Rierson has not been gaining support for the change, but rather the language of legislation. With help from McCorvie, Rierson put together an amendment to a by-law opting for the more permanent change than an Act, which typically has a date attached. Rierson drafted the amendment early in the school year and after going through the Student Affairs Committee, it was put forth as a formal agenda item at the most recent Senate on November 12.

The agenda item was introduced by Vice President, Emily Bowen. Bowen explained that making the Director of Diversity and Inclusion an elected position would be similar to the other elected chairs such as Finance and Student Affairs. Following the introduction, Rierson gave a speech about the continued importance of the change and the need to give her position the ability to vote now as opposed to waiting until the next election, “As ASWC, we are committing to the idea that underrepresented voices get heard.”

Oversight Chair Lily Parker added to this by presenting the senate with two options. From an oversight standpoint, if the change would be made as is, it would mean that Rierson would no longer fit the description of “Director of Diversity and Inclusion.” She would need to be impeached. Executive Council would meet in the following week, appoint a chair to fill the position (Rierson) and at the next Senate the appointment would be confirmed. This process would take at least two weeks. The other option would be to amend the legislation to add a start date of next May when the next election would occur. This would allow all future Directors of Diversity and Inclusion to be voting members once elected. The debate which followed largely surrounded this disparity.

Though the majority of the Senators agreed it was important to make the position a voting member, disagreement lay in the method. Senators debated a number of questions. Should the “rich, white” people be voting on this issue? If not, could voters be screened? When should the change occur, now or in May? Is giving Rierson the vote now going to subjugate democracy? Is democracy or diversity more at stake?

The issue needed a two-thirds majority to pass, but enough people abstained that the amendment to the by-law did not pass, but also did not fail. It now stands in limbo. Senate will inevitably come to a decision, but it is difficult to say what the majority will decide.