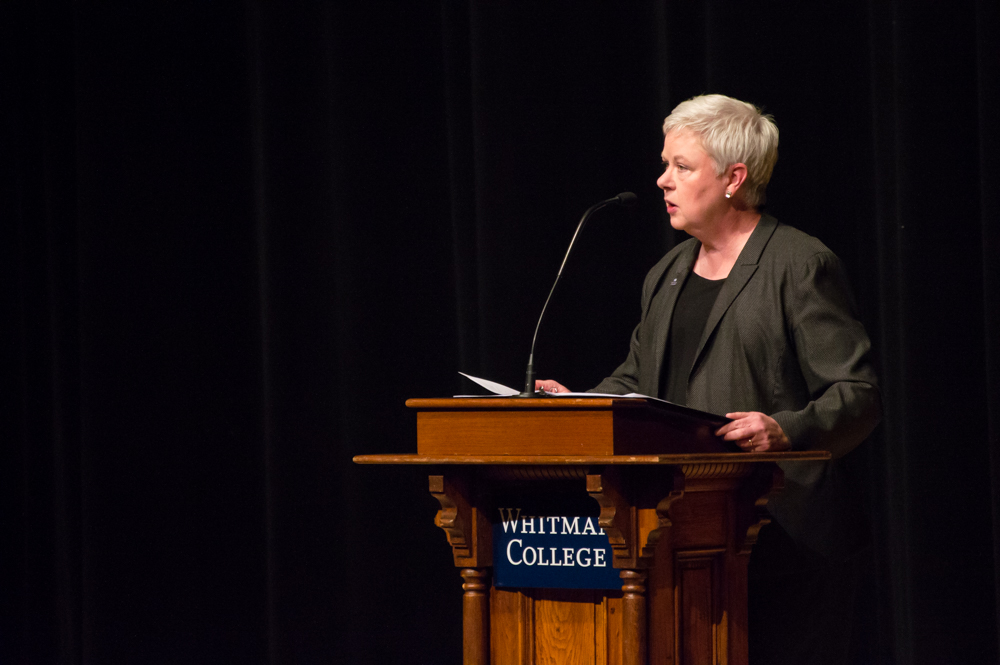 Whitman has a budget problem. Caught between the pincer of underenrollment and unplanned growth in the faculty, Whitman is digging into its contingency fund to prevent sudden cuts. Though over the short-term there will be no drastic changes, if the school cannot regain financial stability in the next few years there will be a problem. In her September 14 opening of the year remarks, President Kathy Murray placed budgetary constraints stemming from underenrollment front and center.

The class of 2021 has 409 students. The target was 435, and on a campus as small as Whitman’s, the 26 students deficit puts a dent in the budget. This is also not the first year that the College has failed to meet its admissions goals. The class of 2019 fell 36 students short of the goal of 425, with only 389 enrolled students.

President Murray elaborated on her opening of the year remarks in an interview the following day. “I’m not in a panic about this,” Murray said of the size of the class of 2021. Part of the problem, explained Murray, is the rising discount rate.

The discount rate is the amount of money in financial aid (both merit and need based) that Whitman gives back to students. The national average is 49 percent, while Whitman hovers around 37 percent. The class of 2021, however, is at 42 percent. “Essentially, if everyone were treated the same, we discount our tuition by 42 cents for every dollar,” explained Murray. “But we budgeted for 37.”

Coupled with a below-expected enrollment, these two factors pose a problem for the College. “This class is both smaller and needier,” Murray said. “Next year, we have a hole to fill in the budget. If the same thing happens again, we will have a capital-P problem.”

“Let’s do the math together,” Peter Harvey, the College’s Treasurer, shares Murray’s apprehension about the enrollment shortfall. “Say we are 25 students short, and for ease of calculation, let’s round off to $50,000 tuition a year. That’s $1,250,000 per year, gross tuition. Of course, you then have to factor in the financial aid packages. So if we give back 37 cents of every dollar, $787,000 a year for four years.”

The enrollment contingency fund should prevent any drastic cuts to the budget as the year winds up, but the pressure is on the newly restructured admissions team to ensure that the class of 2022 meets the enrollment goal and gets the College back on track financially.

One metric favored by the Board of Trustees in evaluating Whitman’s financial security is the student-to-faculty ratio. Historically 10-1, underenrollment caused the ratio to bottom out at 8.2-1 in 2015. Another year of below anticipated enrollment has done nothing to assuage that financial burden.

“How do we get to 10 to 1? It will take multiple years of attrition,” Harvey said.

The centerpiece of George Bridge’s tenure as Whitman College’s President was the “Now is the Time” campaign, in which the College raised $165.7 million to invest in the curriculum and other facilities. Part of the campaign was also to increase the number of tenured faculty. From 2007 to 2015, the school added 29 new tenured faculty, while increasing enrollment by only 43 students in the same period.

Two years after the completion of the campaign, however, the College is now struggling to decrease the faculty in order to restore a 10-1 student to faculty ratio. President Murray, working at Macalester College during the “Now is the Time” campaign, explained what went wrong. The goal was to add “tenure track lines and reduce our reliance on non-tenure track faculty.” Murray continued, “We did add tenure track lines, but we did not reduce our reliance on non-tenure track faculty. So the faculty grew. There was no strategic priority to grow the faculty that way, and we bottomed out at 8.2-1” in 2015.

Harvey echoed President Murray’s message. “It didn’t work the way we thought it was going to,” Harvey said. “A lot of the [new tenure track positions] were supposed to be conversions, moving non-tenure track faculty to tenure positions. That wouldn’t increase the total number of faculty. For a variety of reasons, it didn’t always work that way. Maybe we had to hire a trailing spouse in order to convince the first candidate to come. Maybe there weren’t enough tenured faculty interested in teaching Encounters, so we hired some part time people. A number of those types of things happened.”

Returning to a student to faculty ratio of 10-1 without increasing enrollment beyond 1,540 will require the departure of more faculty. “I don’t think that students are going to notice, we have to be creative in order to manage the student to faculty ratio.” But, Murray continued, “there may be some painful moments along the way.”

The policy of attrition generated widespread anger last spring when it was announced that Professor Schmitz in the History Department and Professor Crockettt in the Art History Department would not be replaced upon retiring. The class of 2022 will enter their first year at a college without a Professor specializing in twentieth century American history or European visual culture since the Late Middle Ages.

Murray hopes that the faculty can adapt by blurring the lines between specialties and even departments. With departmental lines less rigid, she hopes faculty can approach subjects from multiple disciplines and perspectives. “I think those are phenomenal opportunities to grow enrollment in the humanities,” Murray said.

The prospect of classes being cut generates apprehension regardless of the method, but as the College adds more faculty in the STEM fields while simultaneously working to increase the overall student to faculty ratio, it may turn out that attrition will not be felt equally.

Murray cautions cynicism in this regard. “Are we going to do it all on the backs of the humanities? Absolutely not.” But she also acknowledges that robust enrollment in STEM classes will impact the decision. “There is probably less [need for attrition] for departments housed in the hall of science … Those departments have less wiggle room to cut back.”

Jason Pribilsky, Professor of Anthropology and Division I Chair, sees returning to 10-1 as a more long term project. “We’re not going to bounce back immediately,” Pribilsky said. “We’re in the season right now in which every department is listing vacancies which need to be filled and putting forward position requests. There are also departments with extreme enrollment pressure or departments which want to expand their curriculum that put forward a request for a new position.”

The issue, says Pribilsky, is that not all of those requests can be granted. “I think last year what you saw were serious issues of morale stemming from the cuts [of Professor’s Schmitz and Crockett’s tenure lines]. They have the potential to hurt the quality of the education, especially in the short run. I don’t think we have seen the full costs of this program. When I say that I mean morale as a cost, the quality of education as a cost.”

But Pribilsky also noted that policies are constantly subject to adjustment and refocus. “This isn’t Walmart, right? Walmart is responsible to the shareholders and the shareholders only. But a college has different levels of governance. The Trustees know that they don’t want to upset the process too much. Professors who leave cannot simply be replaced. People here have 30-year careers, the College has invested enormously in these professors.” Pribilsky concluded, “It’s their strategy now, I don’t know if it will really get us all the way to 10-1.”