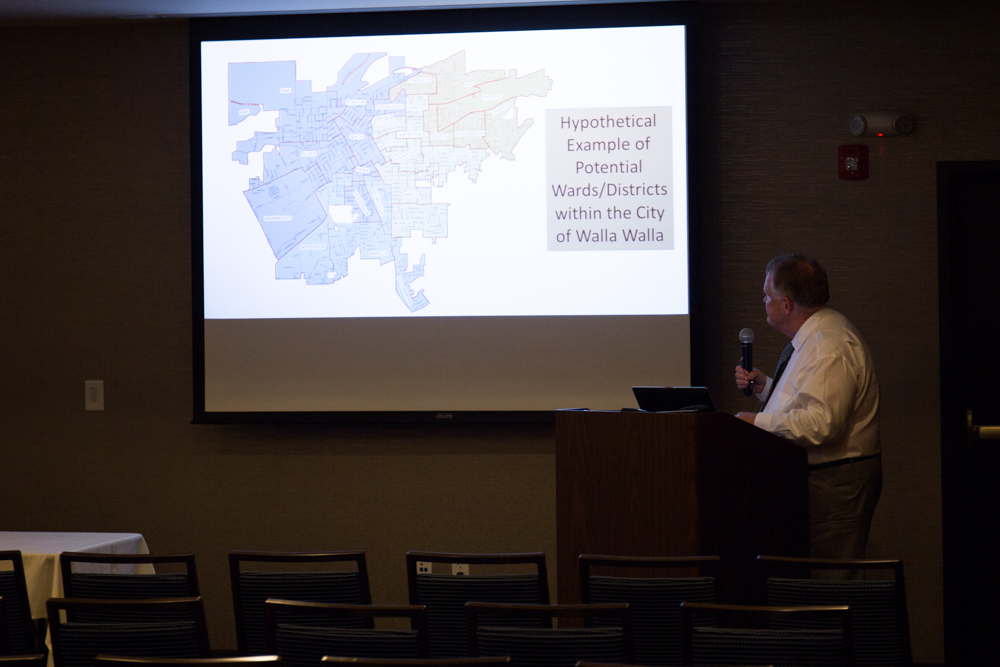 Walla Walla City Council is currently made up of seven members, including Walla Walla’s Mayor, Allen Pomraning. The election process for the city council seats is termed “at large,” meaning any resident of Walla Walla can run. While this sounds like it provides diversity, all of the active council members are white, and three live in the same precinct of Walla Walla.

In a city with 26 precincts, this number is not insignificant. Members of the council, as well as community members, have shown an interest in increasing the diversity and more accurately representing the demographics of Walla Walla. Changing the election system to be based on wards, or districts, is one suggested method of achieving this. Ward-based elections would mean that voting districts would be created geographically, each ward electing a council member from that area. The purpose of the council meeting on Tuesday was to open a conversation with members of the Walla Walla community about whether the election process should change to ward-based elections.

Tom Scribner, current member of the Walla Walla City Council, initially brought the idea forward in May of 2016. He suggested changing four of the seven council seats to be elected by ward, and leaving three as elected at large.

“Walla Walla is not a homogenous community. There are distinctly different parts of town composed of different socioeconomic classes, different ethnic and racial groups, and different priorities and interests,” Scribner said in a published statement. “All of these different groups, classes and priorities are not always – sometimes not at all – at the council table. They should be. Or at least we should do all we can to increase the opportunity for them to be so.”

This proposed change comes on the heels of a lawsuit in Yakima- a city demographically similar to Walla Walla. A Yakima resident partnered with the ACLU to change the election system after witnessing under-representation of the Hispanic population. 41 percent of Yakima is Hispanic and yet there hadn’t been a single Hispanic city council member by 2012, which is when the lawsuit was filed to change the election system to ward-based. The legal battle lasted from 2012 to April 2016, and Yakima paid more than $3 million in legal fees and expenses before conceding.

Members of the Walla Walla community showed up to the meeting this past Tuesday to make their opinions known about the election process. Some expressed concern at having a multi-million dollar lawsuit hit Walla Walla next.

Penny Hawkins, Walla Wallan, spoke first in support of a district based system.

“I don’t understand what an argument against the ward system would be,” Hawkins said. “You can look at the council now, everyone up there is white.”

David Cortinas, another community member at the meeting, echoed these sentiments. He added that he supports changing all seven of the council seats to be ward-based, increasing the proposed number offered by council member Tom Scribner.

“This system here in Walla Walla is rigged. Running four wards or four districts is still rigged, because all you need are four votes to do whatever you want to do in this city,” Cortinas said. “I would strongly support and ask for the community that you run districts across the board.”

Many of the community members who chose to speak at the public forum on Tuesday expressed their support for changing the city council election system, but there were some who stated their desire to keep the current system in place.

Barbara Clark, current member of city council, stated that she supports keeping the current at large election system in place, as it does not negatively impact the diversity of the council.

“While the proposed ward system might result in greater geographic diversity than we’ve sometimes had among council members, none of the proposed wards are homogeneous as to income, employment, age, color, cultural heritage or political orientation,” Clark said in a published statement. “That means we cannot expect election by wards to assure these more important kinds of diversity on the council.”