The Ascent of the “General’s General” 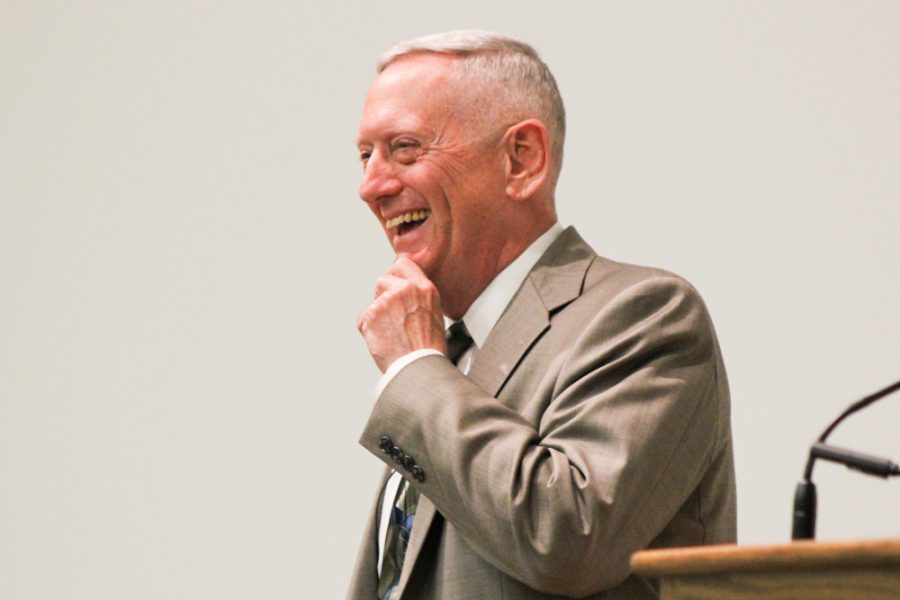 Rarely is General James Mattis referred to by his given-name. Normally he is known by his nicknames: “Chaos,” “Warrior Monk” and, most significantly, “Mad Dog.” Born in Pullman, the  eastern Washington native visited Whitman in 2015, and was confirmed as President Donald J. Trump’s Secretary of Defense on Jan. 20.

Mattis spoke at Whitman in March of 2015 with the help of the Whitman Events Board and then-senior Bill Landefeld, whose father had met Mattis on an airplane. His lecture included a 75-minute question and answer period and many community members were in attendance. During his speech, Mattis emphasized the role of the military in foreign affairs.

“Let me tell you what my real job was at CentComm,” Mattis said during his speech at Whitman, referring to the United States Central Command. “It was to try to keep the peace, or what passed for peace, for one more year, one more week, one more day, one more hour so that Secretary Clinton and the diplomats could try to work their magic and keep another catastrophic war from happening.”

The week prior to Inauguration Day, Mattis, a retired four star Marine general, went before Congress for his confirmation hearing. Though several cabinet confirmation hearings were lengthy and controversial, his lasted only a few hours because he was a nonpartisan favorite. Mattis led the United States Central Command under President Obama from 2010-2013, and the Marine Baghdad invasion in 2003.

Trump met with Mattis in November to discuss naming him the defense secretary, and later tweeted that Mattis was very impressive and a “true General’s General.” However, according to the New York Times, Mattis does not appear to agree with some of Trump’s policies. Mattis finds Trump’s position on Russia to be ill-informed, and has communicated to Trump that torture will not work.

Though Mattis has received public support from both Democrats and Republicans, Senator John McCain has been particularly vocal. In a press release, McCain said Mattis is “without a doubt one of the finest military officers of his generation and an extraordinary leader who inspires a rare and special admiration of his troops.”

While at Whitman, Mattis closed his speech by emphasizing the importance of service.

“A life is only important in the impact it has on others lives,” Mattis said. “I would encourage you to do your own work, listen to people, don’t get arrogant, but stay very focused on serving your fellow persons because you’re not going to want to get to the end of the road and not think you made a difference.”