Letter encourages first years to hold back on fall recruitment 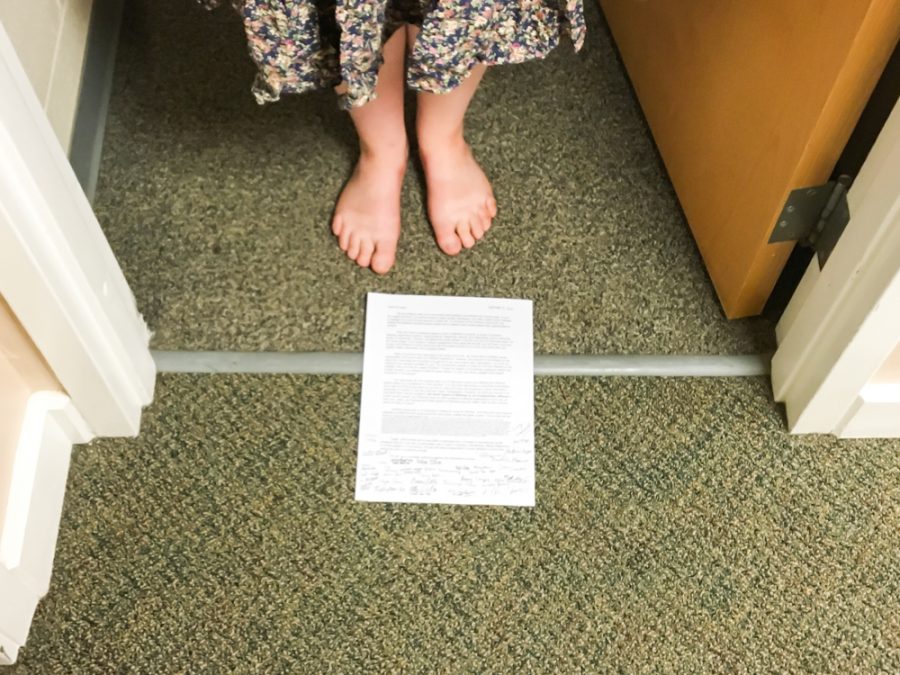 It was the summer of ‘69 when all incoming students of Whitman College last received a letter encouraging them to refrain from participating in fall Greek organization recruitment. This past  Friday, many first years returned to their dorm rooms to find that a similar letter had been slipped under their door.

This more recent letter, was inspired by the 1969 document that senior Katy Wills discovered in the Whitman Archives while doing research for her thesis. Having long considered the critiques she had of Greek recruitment at Whitman, Wills was struck by the way the older letter resonated with her.

“When reading [the letter] I thought it was really interesting…to see some of the issues that we’re thinking about today, contextualized in the sixties” she said.

Wills contacted three of her friends: seniors Julia Karschney and Lily Monsey, and junior Kyla Rapp–all former members of sororities. The four met on the first Thursday of fraternity recruitment–the day before sorority recruitment began–and set out to draft a similar letter.

The 1969 letter was composed by alumni Peter Snow and Vincent Broze shortly after their graduation. Both identified as members of fraternities in their signatures. In their letter, Snow and Broze accused the Greek system of revealing “policies of self-interest and isolation,” sparking considerable debates surrounding the role of greek life on campus. This year’s letter specifically questions whether or not it would be more appropriate for first year students to wait until the spring semester to participate.

In composing the letter, Karschney cited one of her main goals was to let first year students know about things that she wished she would have known as a first-year.

“I think when each of us [was] thinking about crafting the sentences to make up that letter, it was about ‘what’s the information that we would have wanted as first years that we didn’t have?’” Karschney said.

With this goal in mind, the authors of the letter emphasized the variety of activities and communities available at Whitman outside of the Greek system. The letter lists a number of organizations and clubs on campus, which according to the authors, “Will be less likely to persuade [students] to engage in exclusionary social situations that [they] may feel uncomfortable with in order to maintain membership.”

The authors claim that the current recruitment system does not serve to give students a balanced view of Greek life on campus, but rather to convince students to join in order to sustain the organizations.

According to Wills, “Sorority recruitment rules specifically are so intensely regulated and regimented. There are very specific things you can say based on the charter and the organization you’re involved in.”

The role of the national Greek organizations was emphasized in the letter, which stated that such organizations are “at their core, elitist.”

Monsey underlined the national organizations as being a large source of the problems associated with Greek life on campus.

After the letter was completed, the authors collected signatures. Rapp emphasized, however, that apart from the actual text of the letter, the views of the authors are not necessarily shared by those who signed it.

The distribution of the letter took place just before the beginning of sorority recruitment, but the authors mentioned that, were they to do this again, they would have done it earlier.

Senior Mitchell Cutter heard about the letter through a friend and decided to sign it. Cutter was one of the hosts of the “Indie Formal,” an event that took place the first Saturday of recruitment and welcomed first years to attend. Technically speaking, “indie” or “independent” denotes any student who does not participate in the Greek system, but the word has taken on a slightly different meaning from time to time as “independent” students have created their own kind of subculture, taking pride in their non-Greek status.

Cutter says that he wasn’t aware of an indie culture on campus as a first year, but hoped that first year students would hear about the indie party this year.

“The rationale for having that [indie] party at all is that we want to show that you can have fun without being Greek,” said Cutter.

Vice President of Sorority Recruitment Allison Knivila said that while she sees the possibility of Spring recruitment as unrealistic in the near future, she would have been open to a conversation with the authors of the letter had they come had they approached Greek leaders directly.

“The manner in which the letter was distributed made it obvious to us that they were not interested in communication, but rather in making a statement,” Knivila wrote in an email to The Whitman Wire. “Distributing the letter moments before our first event gave us no time to take their opinions into consideration and in my opinion, was a very unproductive way of bringing these concerns to light!”

Knivila also mentioned that the letter did not impact the number of students at the first recruitment events.

The IFC declined to comment on the letter but confirmed that fraternity recruitment numbers remained strong.

In terms of how the letter was received, a number of first years said they were initially confused when they began to read it.

“I thought it was [advocating] for Greek life, at the very beginning of it,” said first year Omar Aldahleh.

First years Sarah Smith and Chloe Holaso shared similar confusion. Smith and Holaso are both participating in recruitment, but Aldahleh is not.

Smith said that while she respects what the letter said, she remained interested in the idea of participating in recruitment.

“I didn’t want to limit myself to completely dismissing rushing and missing that experience, because I’ve talked to a lot of people who have rushed, and have been part of a sorority and have become greater people because of it,” Smith said.

Holaso said that the letter didn’t influence her decision of whether or not to participate in recruitment but mentioned that many people she talked with were taken aback by the letter’s wording.

“We were all basically just talking about how aggressive the wording was,” Holaso said. “It was saying everything as an extreme.”

“I feel like the letter made me want to rush more. It felt like it was a little bit passive-aggressive and it made me uncomfortable,” Rodriguez said.

But after one day of recruitment, Rodriguez became less interested. At that point, she said that she saw the letter differently.

“It was kind of reassuring, because I probably wasn’t going to commit to any sorority, because there’s a billion things to do for free,” she said.

Aldehlah also dropped recruitment. Though his decision to drop wasn’t on account of the letter, he said he was glad to see students openly engaging with campus issues.

“I’m happy that there are students on campus that are going out and voicing their opinions,” he said. “I think a lot of people were talking about it.”