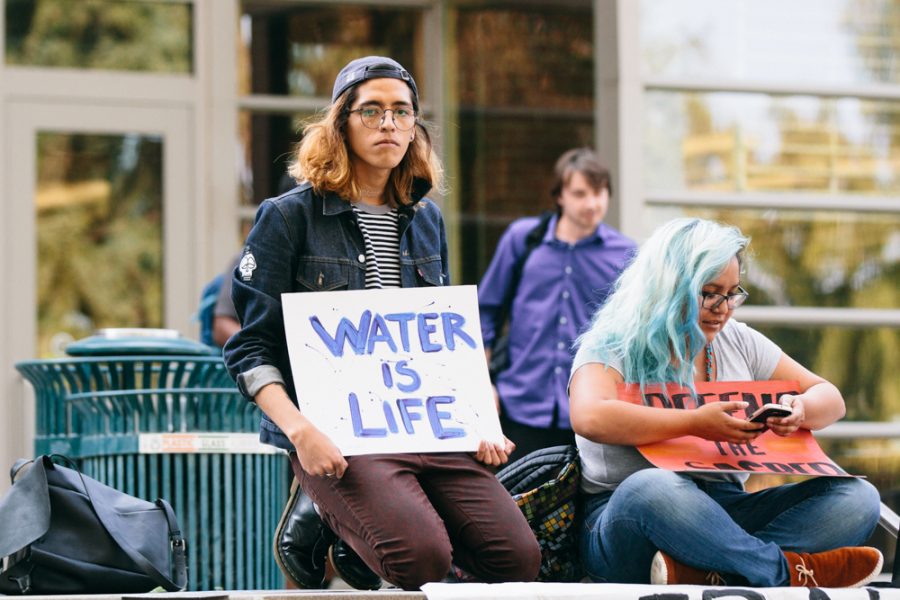 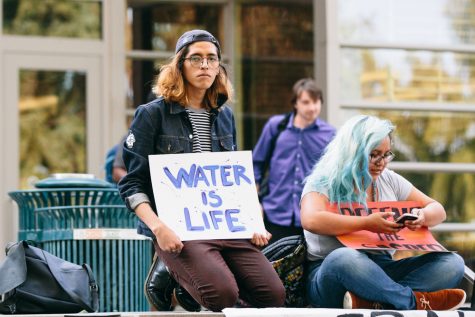 Whitman’s Indigenous People’s Education and Culture Club (IPECC) held a rally at the steps of Penrose Library Tuesday evening in solidarity with protesters of the Dakota Access Pipeline at the Standing Rock Reservation in North and South Dakota. IPECC members, community members and Whitman faculty spoke in opposition to the pipeline at the event. The event focused on bringing awareness to the Dakota Access Pipeline protests, generating support on social media and garnering signatures for a petition that the discouraged pipeline’s construction.

The Dakota Access Pipeline is an effort by the natural gas and propane company Energy Transfer Partners to connect North Dakota’s oil fields with existing oil-carrying infrastructure. It is slated to run through the Standing Rock Sioux Reservation, which straddles the two Dakotas. The pipeline plan has prompted activists to protest its construction at a camp near the reservation, which has picked up traction on social media and in mass media over the past few weeks. The rally was originally planned for the first week of October but moved to Tuesday after discovering that protesters were organizing a day of action on that day.

Senior Brenna Two Bears, IPECC president, served as master of ceremonies at the event. Two Bears has roots at the reservation herself; while she identified herself first as Navajo and Ho Chunk at the rally, her paternal grandfather is of the Sioux nation. Two Bears said that the major focuses of the rally were to encourage Whitman and Walla Walla community members to join the snowball effect of support that has brought the Standing Rock camp into the news.

“The intention of the rally was to raise awareness and gather support,” Two Bears said. “This is the first step of a long process that we are going to be doing on campus. And I think it went really well.”

At the rally, Two Bears and other IPECC members encouraged attendees to speak out about the pipeline on social media, to stay up to date on news from Standing Rock and to sign a petition to the Walla Walla U.S. Army Corps of Engineers asking that they denounce the pipeline’s construction. As of writing on Wednesday, the petition had gathered 150 signatures by Two Bears’ count.

“[IPECC member senior Zoey Kapusinski and] I wrote it maybe 45 minutes before the rally,” Two Bears said of the petition. “We were hoping to get more [signatures], not just from people who showed up to the rally but from on campus and… in the Walla Walla community.”

Members of both communities were present at the rally and many were guest speakers, some invited by IPECC and some who requested to speak. The first of these was Geology professor Bob Carson, who focused largely on the environmental impacts of the pipeline and of fossil fuel dependence generally. He surprised the audience and organizers with two props he brought along: an old map and a grate borrowed from the Outdoor Program.

“I’m the curator of the map room in Geology…We found this today. It’s a fossil fuel map of Wyoming. There’s oil and gas and coal all over the place,” Carson said as he crumpled the map. “I want all the Native Americans, and anyone else who wants to, to come get a match. And we’re gonna burn this thing.” 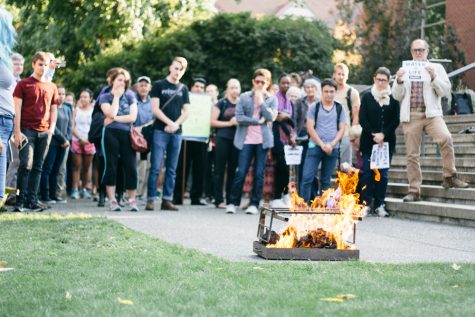 Carson was followed by Anthropology professor Stan Thayne, who discussed the legal and moral implications of building a pipeline on unceded, sacred ground. Next sophomore Megan Cooke discussed her own connection to Standing Rock and the importance of indigenous solidarity. They were followed by a Walla Walla community member who exhorted all in attendance to vote and speak out. Finally, Vice President for Diversity and Inclusion Kazi Joshua spoke about the rally in the context of history at Whitman and in the world at large.

“It was good for getting people together,” said senior Matthew Meyer, who attended the rally.  “I saw a lot of people drop in who maybe might not have known anything about this, so I think it might have been good for those individuals who didn’t know. I appreciate seeing new people getting this information.”

IPECC hopes to continue action in support of standing rock, possibly in the form of a fundraiser for supplies for the camp there. In the meantime, Two Bears and IPECC are looking for other opportunities to spread the word and gather signatures.

In his speech, Joshua concluded with a call to action to IPECC and other attendees in doing that work.

“We can be excused for not being here in 1855. But today, we are here,” Joshua said. “So I’m here to stand with the folks at Standing Rock Sioux tribe, because this is our 1855. This is our Walla Walla Valley. And today we can be counted or today we can choose to close our eyes.”