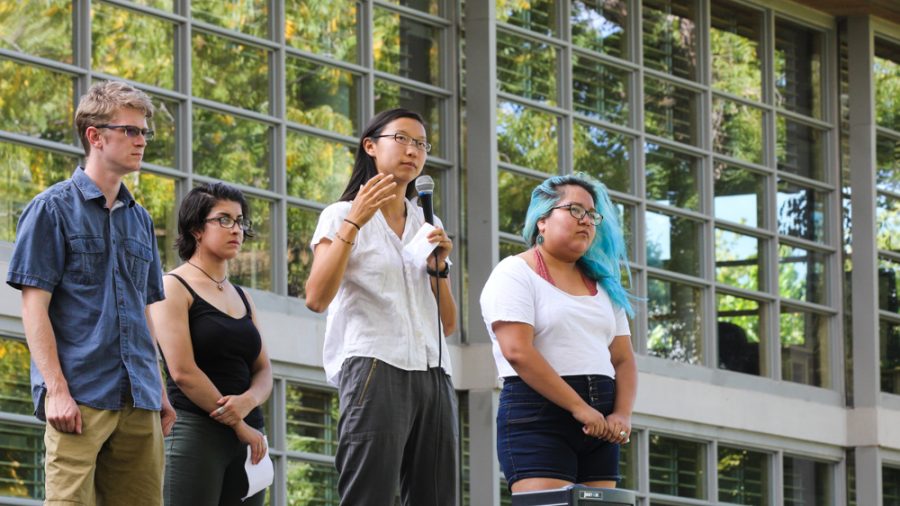 New students were welcomed to Whitman this year with an orientation program designed to introduce them to their new home–and to remind them of who they share it with.

2016 marks the inaugural year for Whitman’s “Home in Pásxapa”  program: an event dedicated to detailing the history of Whitman and Walla Walla largely from the perspective of the indigenous peoples that were here prior to the arrival of white settlers.

Divided into five parts, “Home in Pásxapa” told the story of the encounter between the Cayuse tribe and the Whitmans, who arrived in Oregon Territory in 1836. The event used historical landmarks on Whitman’s campus to examine how the relationship between local tribes and the college has evolved in its portrayal. The event included speeches from members of the Indigenous Peoples Education and Culture Club (IPECC), Professor of Politics Melisa Casumbal-Salazar, Director of Communication for the Confederated Tribes of the Umatilla Indian Reservation (CTUIR) Charles Sams III and Park Ranger from the Whitman Mission Kate Kunkel-Patterson ‘13.

The college began developing the program after the decision to change the mascot last spring. In an email sent out to the Whitman community on April 6 of last year, President Murray cited a “common thread” amongst the comments on the mascot survey, from those both for and against the change, calling for education regarding the history of the Whitmans and the Walla Walla Valley. Murray announced that information regarding the college’s history and namesake would be included in the 2016 new student orientation.

While preparations for a new event were just announced last spring, the college has been working with the CTUIR to develop a memorandum of understanding for about two years. Expected to be completed this winter, the memorandum will create a formal avenue for dialogue between the CTUIR and the college. Discussions regarding a potential addition to the orientation program began about a year ago.

“We had a meeting last summer on campus with a number of their elected leaders and talked about what each organization would love to do together, looking into the future,” said Associate Dean of Students Noah Leavitt, who, along with Associate Dean of Students Barbara Maxwell led the planning of the event. “One of the things that the CTUIR leadership said to us is ‘We would love the chance to share our story with your young people when they come here.’”

Since Murray’s email was sent last April, Leavitt and Maxwell have met several times with a committee including representatives from the faculty, staff, students, alumni and members of the CTUIR.

Along with providing more information for students regarding the college’s history, Maxwell cited creating a sense of home for new students as a principal goal of the event.

“It was really important for students to understand that their new home away from home or second home is their home–but it’s a home that’s shared by lots of people. And if you go back 10,000 years, it was the home of the descendants of the confederated tribes” Maxwell said.

The event began with a presentation from Sams in which he highlighted important elements of the Confederated Tribes’ culture and their history.

In speaking, Sams hoped to fill certain gaps in the education system in the U.S.

“Looking at the American education system and how American Indians are portrayed in our education system–in media in general and figuring out how we start to break those barriers down,” were some of the challenges that he kept in mind while planning his presentation.

After Sams’ presentation, students were divided into four groups in order to rotate between various presentations linked to historical landmarks on campus said Leavitt. “We really wanted to have people feel that the place they walk around on every day has such an incredibly rich long-term, multifaceted, interesting history as they move around campus,” Leavitt said.

In front of Memorial Hall, Kunkel-Patterson detailed the way in which the historical site had altered its presentation of the story of the Whitmans after connecting with members of the CTUIR, to present a narrative that included the perspective of the tribes. Members of IPECC spoke in front of Penrose Library, discussing The Legacy of Stephen B. Penrose, under whose presidency the college gained its Missionary Mascot. Incoming students also had the opportunity to attend a presentation by Casumbal-Salazar who analyzed the narrative presented by the painting “The Whitman Legend,” depicting the arrival of the Whitmans and their encounter with local indigenous peoples, which used to hang on the wall in Memorial Building.

Finally, after taking a few moments to examine Treaty Rock, the monument commemorating the Treaty of 1855, students listened to another lecture by Sams focused on the history of and discourse surrounding land from Papal Bulls and the Doctrine of Discovery to the Louisiana Purchase and, later, the Treaty of 1855, in which the tribes ceded 6.4 million acres of land.

The event concluded with a First Foods Festival at which students and presenters were invited to partake in a dinner based on the traditional foods of the Confederated Tribes.

Many incoming students responded positively to the event.

“We learned about manifest destiny, and sure, we did get a bit of the Indian American side of it but I think that it’s still something that’s really not covered enough in our educational system,” Dardonville said.

Other students praised the event for being both educational and welcoming.

“Even though we’re living on [the confederated tribes] old land, [Sams] recognized that we’re now part of their family, and we’re welcomed here,” said first year Alex Brockman. “He welcomed us to explore their traditions and to come visit at the museum and learn more about their culture.”

Sams said that while he was only able to give students a taste of the history of the tribes he hopes that they will feel motivated to seek out more information.

“Mostly I just wanted to peak their interest in [the history],” Sams said. “Without giving the full narrative I wanted to introduce it to the Freshman class in the hopes that over these next four years they will take it upon themselves to make these visits to Tamástslikt, they will take it upon themselves to…learn the history through their own eyes.”