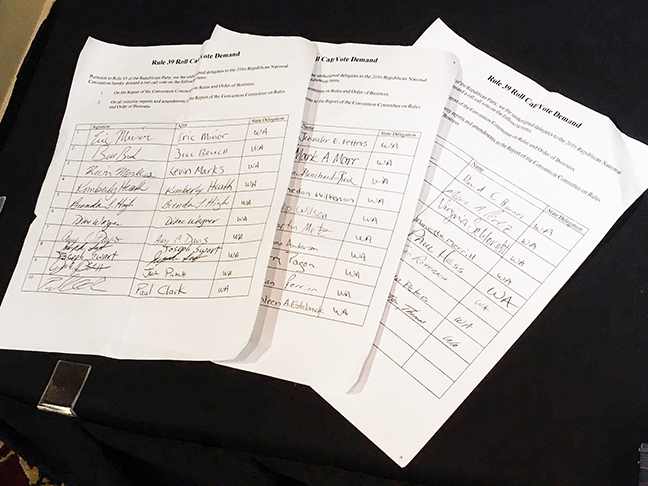 Cleveland–Every four years the Republican primaries give conservative voters across the country the opportunity to choose a nominee who represents their values and advocates for their policies on a national level. According to many members of the 2016 Washington State RNC delegation, this process was usurped this year by Donald J. Trump. Trump took the party by storm, collecting more primary votes than any other candidate in the party’s history and sending the Republican establishment into a frenzy trying salvage their splintered party.

In the mayhem, a group of dedicated Ted Cruz supporters emerged as the final obstacle between Trump and the Republican Nomination. Working under the slogan “Never Trump” these delegates, politicians and activists attempted to stage a political insurgency on the Convention’s opening night to unbind delegates and prevent Trump from assuming the nomination.

Every nominating convention begins with the adoption of the rules package agreed upon by the rules committee. This committee is composed of 112 members with representatives from each state as well as 12 delegates-at-large. The committee meets three times a year every year to craft the laws that will govern the upcoming convention. They last met on July 14, 2016, for what has been described as a “marathon session” to finalize the 2016 convention rules.

The Anti-Trump movement within the rules committee attempted to unbind the delegates before the convention began.  They submitted new proposed rules as well as a long list of amendments to existing rules, all aimed at unbinding the delegates and allowing them to vote their conscience.

A bound delegate must cast their vote based on the primary results from the state that they represent. These bound delegates don’t have a say in which candidate they vote for, they are directly constrained by the voters in their state. Not only was the “Never Trump” group unsuccessful in freeing the delegates, the rules committee added language that more explicitly bound delegates during the 2016 convention.

This failure meant that the only hope for the “Never Trump” movement was to reject the rules package on the convention floor so that the convention would function based on a previous version that omitted the explicit binding clause.

In order to accomplish this, the anti-Trump group needed to collect signatures from more than half the delegates from at least seven states to force a roll call vote and decide whether or not to accept the rules package. Once that threshold was met, convention speaker Paul Ryan would begin the roll call vote, and if a majority of the total delegates opposed the rules package it would be struck down and the convention would proceed under a previous version of the rules. Unfortunately for the “Never Trump” group, this threshold was not met.

The official narrative is that nine states initially met the majority delegate threshold to trigger a roll call vote, but after a series of negotiations three of those states fell below the threshold. Paul Ryan then called for a voice vote, the “ayes” won, and the rules were accepted.

It is unclear what “negotiation” means. Some on the “Never Trump” side prefer “political strong arming” to describe how the RNC convinced delegates from three states to remove their signatures. Either way, the result was a voice vote that passed the rules package and made the nomination of Donald J. Trump inevitable.

In Washington, the caucus to choose the delegates is separate from the primary election where the voters decide who those delegates will vote for. The Washington Caucus was held in February while the primary did not happen until May. The Ted Cruz campaign was organized and dynamic during the caucus, managing to get nearly all of their delegate selections through to the national level. Of the 44 Washington delegates, 37 were ardent Cruz supporters.

By the beginning of May however, Trump was the only remaining candidate. Cruz suspended his campaign after Trump won all 57 delegates with 53 percent of the votes in the Indiana primary. In Washington, Trump won 75 percent of the Primary vote and Cruz, with his 10 percent, did not reach the 20 percent threshold which would have qualified him for delegates from Washington. Trump received all of Washington’s bound delegates.

This posed a dilemma for the Trump-bound, Cruz-supporting delegates who were then forced to cast their votes not only for a different candidate than the one that they support, but for a candidate that many of them absolutely hate.

Andy Hutchison is a delegate at large for Washington state. His wife, Susan Hutchison, is the Chairman of the delegation, and they are both deeply involved with the Washington State Republican Party. Hutchison contends that because Trump won Washington’s primary election and Cruz failed to secure the minimum 20 percent, Trump should receive all of Washington’s bound delegates.

Eric Minor is a delegate from Gig Harbor. He has been an integral part of the “Never Trump” movement both nationally and within Washington.  Three or four months ago, Minor had no formal involvement with the Republican Party, but, he said, “I always voted Republican.” His relative lack of involvement changed in 2016 as the competition between Trump and Cruz heated up. Minor felt that it would come down to a floor fight, and Cruz would need delegates to stop Trump’s nomination. “I supported Senator Cruz from the very first day he announced, and in my judgement, he is the best candidate Republicans have had since Ronald Reagan, bar none,” Minor said.

Minor also told a different version of the Washington state primary. He argued that because Ted Cruz had already dropped out of the race before the Washington primary, there is no Democratic process to be protected. Conservative voters had no other option, and even with that, Donald Trump only received 75 percent of the votes.

“That is not indicative of a mandate that the people in Washington want Donald Trump,” Minor said. He also claims that roughly 14 million Democrats participated to sabotage the Republican primary. “If everyone else is going to play by that charade that’s fine, but I’m not going to.”

Minor and other Trump opponents look to a book called “Delegates Unbound” to support their arguments. The book claims that the issue was settled in 1880 when James Garfield was nominated for President and claimed that there can never be a convention in which delegates votes are bound. “Delegates Unbound” argues that from every Republican convention since 1880, excluding 1976, Delegates have been unbound and haven’t been required to vote based on their district’s election results. “The simple fact is that the delegates for the Republican Party choose the nominee,” Minor said.

“What if the presumptive nominee shoots someone in the head between the Washington primary and the convention? Am I still bound to vote for that candidate? That is ridiculous,” Minor said.

He acknowledges that the Democratic process is important and said that delegates should take into consideration the votes of the state that they represent, but for Minor it is ultimately up to the delegates to cast their vote based on what they think is the best candidate for the party and for America.

“I am the one responsible for putting forth the nominee for the Republican Party that will possibly be the 45th President of the United States. That’s an awesome responsibility, I have to take it seriously, I will not be told how to vote,” Minor said.

Hutchison and Minor also tell vastly different versions of how the “negotiations” that ruined any chance of success for the “Never Trump” group took place.

Hutchison claims that it came down to a convenience issue. “The thought was that we would spend all this time, about four hours, doing this vote and disrupting the convention and we’d have the same result,” Hutchison said.

Minor of course saw it very differently, claiming that the RNC knew they had met the threshold and then deliberately cheated. He says that they sent out state chairs to “muscle up” delegates and get them to remove their signatures.

“It was a sham,” Minor said. “Like something that happens in a Banana Republic in South America. Not worthy of something that should happen in the United States of America.”

Minor described getting phone calls from neighbors and friends, appalled when the Washington delegation announced that all 44 of their votes were going to Trump.

An Unbound System May Have Prevented Trump, but at What Cost?

Being a delegate is expensive. Between airfare, hotel costs and eating out for 5 nights, the Washington delegates had to pay upwards of $900 to attend the convention in Cleveland.  They were also expected to spend a full work week in Cleveland.  Including the days spent at the various local and regional caucuses, delegates missed up to ten days of work, not even including the time spent networking to win votes and researching to prepare for the campaigns.

Of the nearly 2,500 Republican delegates in Cleveland this past week, 18 were black. In sum, the national delegates are an exclusive club, largely dominated by the wealthy and devoid of any meaningful diversity.

While many see Trump as a terrifying prospect, his potential presidency is not nearly as terrifying as an America in which 2,500 wealthy Americans have near total power to select a Presidential nominee.

Kelly Lotze is an alternate delegate from Spokane Washington who works as a political consultant. Lotze has been involved with the Washington State Republican Party for a long time. He tried unsuccessfully to be a delegate in 2012.

“Just as Minor would accuse them of strong arming people, in my opinion, I could accuse him of trying to strong arm people into trying to sign that roll call vote. It goes two ways.”

Lotze also argues that Andy Hutchison was probably exaggerating, and that the roll call would not have been as much of a disruption as Hutchison estimated. “They can either do it by polling the delegation, which is faster than the verbal style we did for the nomination, which would probably only have taken about two hours, not four.”

For Lotze, this is a situation in which the cure might be worse than the disease. Considering how many opportunities there are throughout the four years between elections to amend the rules, it just seems unfair to try to drastically alter the system at the eleventh hour.

“I get what they’re trying to do, I get the vote your conscience thing, but at the same time if we were to change our rules, we completely disenfranchise over 600,000 people, everyone that claimed to be a Republican, everyone that voted in the Republican primary, and Donald Trump got the majority of those votes,” Lotze said. “You have to think about the future.”