A Day of Endings and New Beginnings

On the final day of the Republican National Convention, Donald Trump accepted his party's nomination for President of the United States 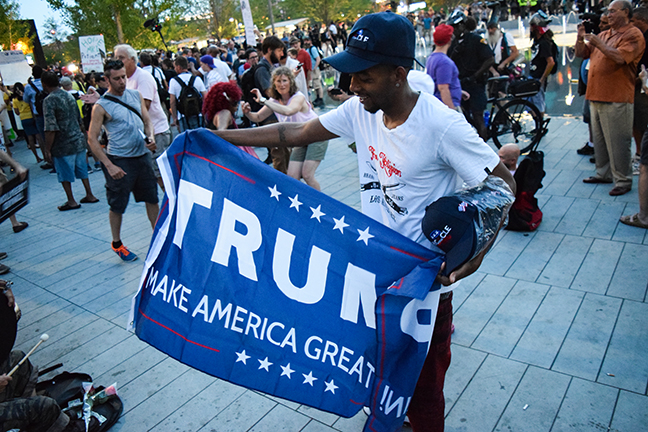 Cleveland, Ohio – And just like that, it’s over. Crowds packed into the Media Zone on Fourth Avenue in downtown Cleveland to watch Republican nominee Donald J. Trump deliver his acceptance speech. Chants of “USA! USA!” rose from the assembled crowd, and the atmosphere was happy and inviting.

Day four was probably the most high energy day of protest throughout the convention. The city of Cleveland turned the fountain on in the center of Public Square, which prevented the congregations seen on previous days, but protesters were unperturbed. Rev Com, a group of socialist protesters teamed up with self described anarchists to launch a rally that turned into a march down St. Claire, eventually doing loops around Memorial Park.

Protesters wore rags concealing their faces and held flags, some of which bore the notorious “A” of the anarchist movement. The crescendo was a spirited debate between members of Rev Com and members of Turning Point, an anti-Communist group with student chapters all over the country.

It was surreal to hear these well informed debates over the macro structure of government and economy at a political rally. None of the debaters seemed to have any political allegiance, they were more interested in weighing the merits of capitalism versus communism.

At 5:00 PM the square erupted into chaos as a protester threatened to burn an American flag. Within seconds he was flocked by police officers and journalists, though it ultimately came to nothing.

Rev Com mobilized again towards the beginning of the evening session of the RNC, protesters marched the perimeter of Public Square and called for a revolution. As the sun began to sink below the skyscrapers, a group of protesters clad in yellow bearing signs reading “Love Trumps Hate” danced through the square to the beat of drums and the crowd’s mood began to change.

The rest of the night felt like a party. Everywhere I turned police officers were taking photos with kids and shaking hands. Men draped in Trump flags embraced women wearing Black Lives Matter shirts. By the time Ivanka Trump began her introduction, most people had settled in to watch the ending unfold.

I watched Trump’s speech with a group of older Trump supporters from Southern California. They were all nice, well informed, tolerant men. None of them displayed the kind of vengeful spite that we have come to expect from Trump’s fan base, and they all had valid reasons for supporting Trump. They were willing to hear my arguments, and I heard theirs. Though we didn’t all agree, we were all agreeable.

Political pundits will undoubtably analyze every stutter and misstep, searching for meaning. This was without a doubt one of the worst-orchestrated conventions of the past half century. Though the convention didn’t live up to it’s catastrophic billing, Melania Trump’s plagiarism will go down in history as one of the silliest political blunders ever. Cruz’s refusal to endorse the Republican nominee will also be talked into the ground, and the political insurgency staged on the convention’s first day seems like a problem only temporarily solved.

Having said that, I loved every minute of it.

Thank you to the police officers who came from far and wide to make sure that no one was hurt. This was truly a clinic on effective and ethical policing. Final totals have yet to be announced, but I doubt the arrest tally will exceed ten.

Thank you to all of the local Clevelanders, for sharing your city with us and making sure everyone stayed safe.

Thank you to Guys Pizza, on the corner of Superior and 6th which without a doubt served the best $2 deep dish Pepperoni pizza I have ever had in my entire life.

Check up on Monday, July 25 for our coverage of the Democratic National Convention in Philadelphia, PA.