A Streetcar Named “Death of the G.O.P.”

Day 3 at the Republican National Convention 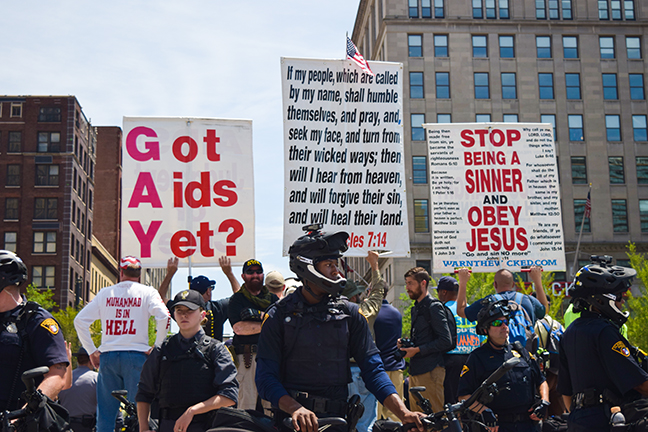 Cleveland, Ohio — The Republican Convention is now three quarters complete. Wednesday brought another day of inconsequential protests and a heavy police presence outside the convention, while inside a Republican Party starved of unity continued to prove that modern conservatism has many different meanings.

Among the protests, A rousing speech from pro-choice advocates was highlighted the day, but even that failed to draw the kinds of crowds expected for this convention. Officers spent the majority of the day protecting Westboro Baptist Church members who continued to propagate their message. Regulars in the Public Square seem to have grown used to the Westboro lectures, which were often greeted with laughter today.

Protesters launched a march towards the end of the day, but turnout was low and it fizzled out quickly.  The anger that was palpable in the past two days seems to have subsided.  Large groups of people handed out “free hugs” shirts, and volunteers offered free food and ice cold water to anyone in need.

I spent much of the day pounding the pavement around the Quicken Loans arena, but was able to meet with a few of the delegates from Washington state at a local restaurant. They gave me insights into what goes on behind the scenes at the conventions. Delegates receive a week of exclusive after-parties and open bars as a reward for their work organizing and rallying voters.

The restaurant we ate at broadcasted coverage of the convention, and when Ted Cruz appeared on screen everyone went silent. The television volume was instantly turned up.  Cruz praised his wife, which brought cheers from the assembled crowd, many of whom were wearing red shirts that read “Cruz Conservative” in the outline of Washington State.  I was informed that many of the Washington delegates had just finished meeting with Senator Cruz.  Cruz spoke later that night at the RNC and was greeted with boos when he was unwilling to endorse Donald Trump’s candidacy.

Washington State is home to a number of the #NeverTrump delegates who helped to organize Monday’s attempted political insurgency. Eric Minor is a delegate from Gig Harbor and is an ardent Cruz supporter who been involved in national efforts to usurp Trump’s nomination.

This election has been something of an identity crisis for a lot of Republicans, as the values and ideas that used to define the party are shifting. Minor summed up conservatism with three phrases. “Limited constitutional government, free markets, fiscal responsibility. That’s what conservatism is to me,” he said.

This definition is in stark contrast to the definition provided by Bruce Spratling, a Trump supporter from South Dakota who traveled to Cleveland to support the republican nominee. Spratling told me that Trump supported “traditional American values,” which he then expanded upon. “Heterosexuality, a white majority, and a unified culture.”

Some will damn Trump as the divisive figure that generated xenophobic and racist attitudes while others will hail him as the great exposer, bringing racial tensions to the forefront of the political discussion. Either way, the Trump campaign has awoken the sleeping giant that is American intolerance.
As we move into the final day of the Republican convention, it is still unclear if  Trump can unite the Republican Party under his banner. For Minor and many others like him, that will never happen. This split down the middle of the Republican Party raises questions over the Party’s future viability, and the same can be said of the “Bernie or Bust” crowd on the left. It seems that the destruction of the two-party system may be the only logical cure to this national political identity crisis.