Protests, though spirited, were contained by an enormous and well marshaled police force, and businessman Donald Trump officially seized the Republican nomination. 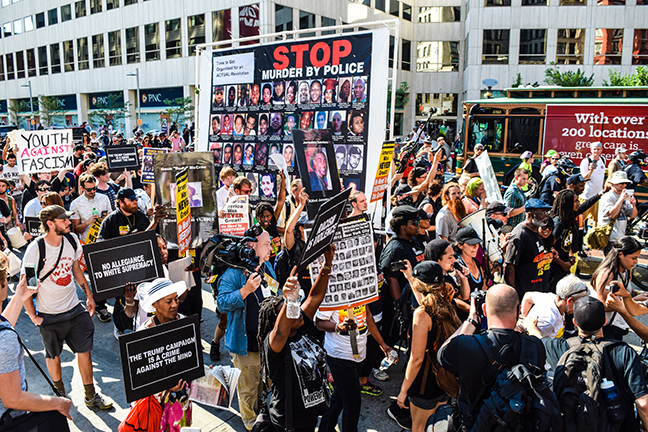 Cleveland, Ohio – The second day of the Republican National convention followed much the same script as the first. Protests, though spirited, were contained by an enormous and well marshaled police force, and businessman Donald Trump officially seized the Republican nomination.

Protests were kept to a minimum for most of the day. Small groups assembled in Public Square throughout the day to broadcast their messages. Black Lives Matter protesters and members of the Westboro Baptist Church occupied separate corners. The main attractions for most of the day, however, were the guns. Police officers arrived in force when two African-American men entered the square brandishing assault rifles. Jaimes Campbell, a protester in Public Square, carried a loaded assault rifle and said, “it is not a crime to be a minority in this country and carry a gun.” SWAT officers with riot shields stood in front of men in army fatigues, helmets, and assault rifles.

The mood was calm until around 4 o’clock, when Alex Jones, notorious radio show host and conspiracy theorist, arrived. Wearing a crisp suit and surrounded by bodyguards, Jones headed immediately for the center of the square brandishing a megaphone. “We’re here as the American people, saying that our free country is not gonna have a bunch of dirty communists, and terrorist scumbags.”

A group of protesters responded to Jones, chanting “Nazi scum, off our streets!” and eventually drowned out Jones’ speech. Jones and his bodyguards headed towards the stairs where the protesters stood and a scuffle ensued. Police broke the fight up in seconds and began to aggressively partition the park to prevent further violence. Within an hour they had totally separated the Westboro Baptist Church group from the Black Lives Matter protesters.

The Black Lives Matter group eventually left the square and began marching down South Roadway, continuing until it intersected with 13th Avenue where they held a rally before dispersing.

Though protesters brandished signs with passion and Westboro Baptist church members demonstrated nearly inhuman stamina, both days of the convention have felt safe. A lot of money and resources have been invested in keeping this convention that way, as the eyes of the nation turn to Cleveland.

One of the people speaking in the early afternoon was Alfred Porter Jr., the President of “Black on Black Crime Incorporated.” Porter addressed the assembled crowd and repeated the phrase, “tale of two cities” many times. Porter lamented the inequality in Cleveland, the city has spent so much preparing for the convention while so little goes to poor black communities in the city.

“I think right now, the tale of two cities is the fact that they spent almost $30 million down here for the square…The renaissance here is beautiful, I’m impressed with all of it, but we’re being strangled,” Porter said.“Uptown and in the inner-city we’re being caught from shootings, police brutality, abandoned property, nothing is being fixed up.”

“Reporters definitely aren’t seeing what’s going on outside the convention. Not in any shape or form. Outside we’ve had about 17 shootings starting from Friday evening (July 15) till this morning (July 19),” Porter continued.“If you let people know that the entire police department will be downtown… They said what was going to happen, and a lot of criminals took advantage of it. We have now 12 active shooters, runnin loose, but everybody is safe downtown.”

The RNC has brought the eyes of the nation to Cleveland Ohio, and it is clear that projecting images of security is at the top of the Party’s agenda. On the streets of the protests it has often seemed that reporters and police officers outnumber protesters. The unfortunate cost of this well ordered convention is a lack of protection throughout the rest of Cleveland. 17 black lives are clearly expendable, whereas the feeling of stability is priceless. Right now, downtown Cleveland, Ohio might be the safest place in the country.