Vigil Held In Honor of Those Killed by Terrorism 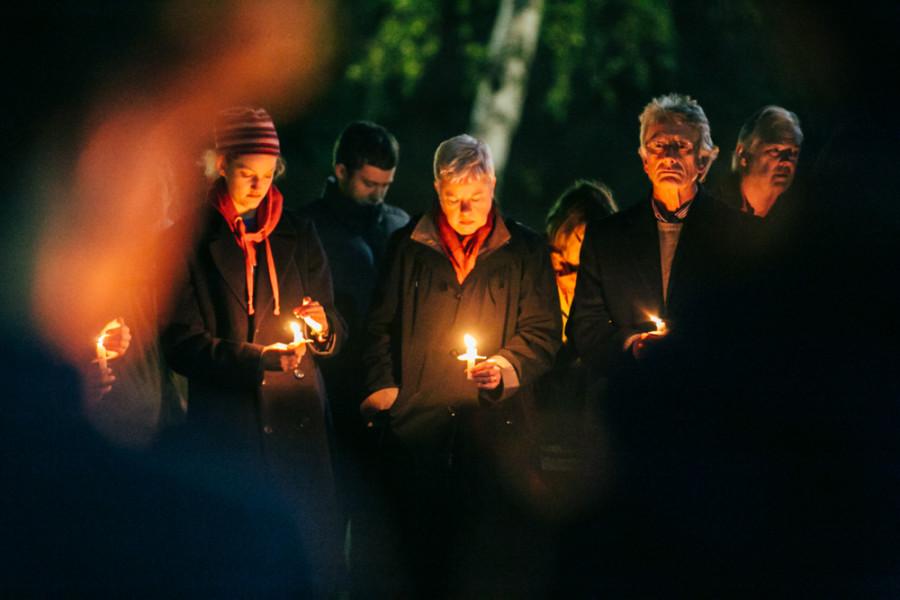 On Nov. 16, La Maison Française (the French Interest House) worked with Adam Kirtley, the Stuart Coordinator of Religious and Spiritual Life, to host a vigil on the front steps of Memorial Hall. The vigil honored those killed in Beirut and Paris in the week prior during separate attacks by the terrorist group ISIS. The event featured a speech,  a rendition of John Lennon’s song “Imagine,” and a large piece of paper to encourage those there to reflect upon the recent tragedies. The vigil seemed to have impressed upon its attendees the importance of discussing how Westerners respond to violence and emphasized compassion for all individuals affected by similar events.

According to junior Olivia Barry, the Resident Assistant of La Maison Française, the vigil was meant to be an event where attendees could reflect not only upon the lives lost in Paris, but how terrorism currently plagues many parts of the world.

“We thought that the Western media attention—that was focused on Paris specifically—was a good opportunity to recognize the lives that were lost in the violence that is ongoing throughout the world,” said Barry.

Nina Vanspranghe, the Language Assistant for La Maison Française, gave a speech in French about discovering the news of the tragedy in Paris. This enabled Vanspranghe to add a more personal element to the speech.

“For me, French words are way more intimate and close to my heart. The more you use a language, the more the words are connected to what you’ve been living,” Vanspranghe said.

Vanspranghe expanded the speech and called for those present to feel compassion for all victims of violence, no matter where they were from.

“We [France] are not the only country who has suffered. Open your doors. Don’t categorize people. Try to understand. Don’t be afraid of people who have different religions and races,” Vanspranghe said.

Some other elements of the vigil included a big pieces of paper for those present to process their emotions through writing and a rendition of the song “Imagine” that was played outside of Bataclan Concert Hall as the attacks in Paris occurred.

“Hillary came up with the writing on everything on the big pieces of paper. [The members of La Maison Française] also wanted to include some sort of reflection time and the idea was brought up of doing the John Lennon musical piece to allude to the pianist who rolled out his piano in front of where one of the massacres was happening,” Barry said.

While the decision regarding the direction in which to take the vigil largely fell on those in La Maison Française, Kirtley gave them some initial ideas for what they might want to include in the vigil and helped get the supplies needed once the day came.

“I provided some structural support. I talked to Olivia about the various kinds of things that can happen at a vigil. [La Maison Française] emailed me with its vision, and I said, ‘okay,’” Kirtley said.

Going forward, some attendees of the vigil seem intent to remember those being killed by hate not only in Paris, but all over the world.

“I’m sorry that it had to come to this. That for us to truly realize all the tragedies that are going on, we needed to have so many people die, because stuff like this happens every day. Just because it happens in Paris, everyone cares,” first-year attendee Zaynab Brown said.

Furthermore, Kirtley wished that people would not show anger towards the Muslim faith because they thought it inspired these killings. Instead Kirtley hoped that faith could be a conduit for healing together.

“Frequently, at times like this, religion gets blamed, and I think that I’m of the belief that the very best iterations of religious identity bring the world together, not separate it,” Kirtley said.