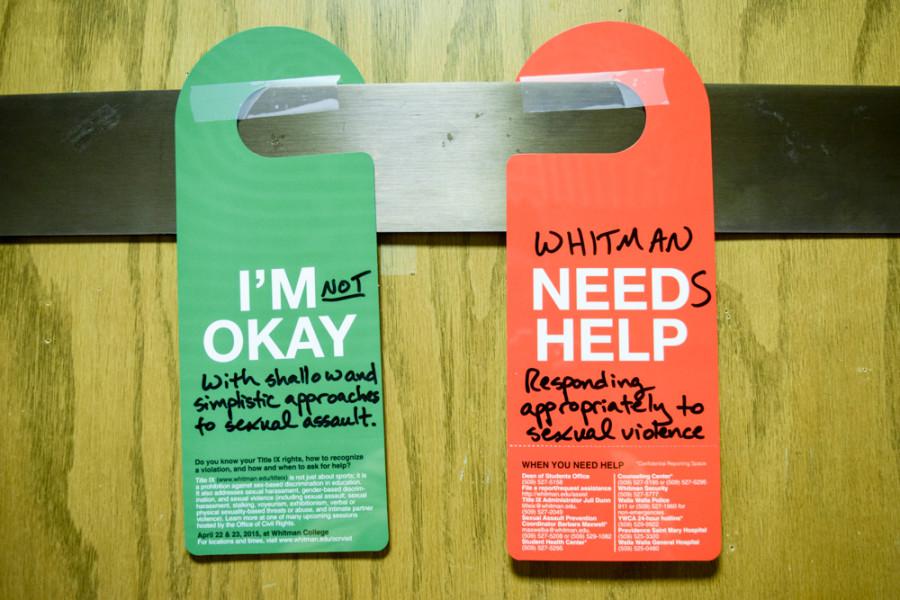 Professor Melissa Wilcox amended the door hangers produced in conjunction with the visit from representatives from the Office of Civil Rights. Photo by Anna Dawson.

Investigators from the Office of Civil Rights (OCR) visited Whitman from Wednesday, April 22 to Thursday, April 23 to determine whether or not the college is following its professed Title IX and sexual assault policies.

Sexual assault has been a contentious issue on campus for several years, and it has received more attention this year. In the week prior to the OCR visit, the college launched a contentious publicity campaign using door hangers. The faculty also voted to remove the Sexual Misconduct Policy from the faculty code on April 22, which will make it much easier to revise the policy in order to uphold changing legal requirements and respond to student suggestions.

“We were asked by the Office of Civil Rights to make it very clear to our campus that they were coming. They asked us essentially to have an ad campaign,” said Title IX Coordinator and Associate Dean of Students Juli Dunn. “I think we succeeded in that because they had turnout [here], while at previous institutions they’d been at of much larger size they’ve had very few students show up.”

According to Dunn, the OCR investigators were impressed with the turnout at events held to connect with the student body at Whitman. Nearly 40 students attended group sessions, including one for student athletes and another for members of Greek organizations. A small number of students also showed up for the working groups and investigators’ open office hours.

Dunn credits the large turnout to Whitman’s involved student body, as well as the publicity campaign created by the college administration during which door hangers were placed on nearly every door on campus on the evening of Tuesday, April 15. The door hangers displayed information about the OCR visit, as well as information about Title IX policies and resources on campus for survivors.

The door hanger campaign was highly disputed on campus, as many critics from the faculty and student body felt the door hangers did not sufficiently emphasize the upcoming OCR visit. While the door hangers include information and resources, the majority of their space consists of a message reading “I’m Okay” on one side and “Need Help” on the other. In an email to the student body, Dean of Students Chuck Cleveland suggested that these could be used to publicly signal when someone in an office or residence hall needed help dealing with trauma from sexual assault.

“They have the effect of trivializing the issue of sexual assault,” said Associate Professor of Religion and Gender Studies Melissa Wilcox. “That may not have been the intent, but that’s certainly the effect they have had.”

With the support of several faculty members, students from Feminists Advocating Change and Empowerment (FACE) and All Students for Consent (ASC) gathered dozens of door hangers from across campus and revised their text to read messages critical of the administration and campus community’s attitude towards sexual assault and misconduct.

“We wanted it to be something public, so the OCR [and administration] could see another perspective … And if the purpose of the door hangers is to start a conversation, I think this will do a great job,” said junior Leda Zakarison, who helped organize the efforts to revise the door hangers.

Dunn read many of the revised door hangers, which were attached to the tennis court fences, and agrees with many of the sentiments behind them. She encourages community members with concerns or suggestions to speak with her in person, though none have yet responded to her invitations.

According to Wilcox, there is a strong sense among critics of the administration that the college is more interested in protecting its image than effectively addressing issues of sexual misconduct. She hopes that the OCR visit ultimately results in more open discussion of sexual misconduct on campus and administrator acknowledgment that mistakes were made in the past.

“I would hope that whatever problems there are with Whitman’s responses to sexual assault and sexual harassment, that those are identified and made public [in the OCR report], not to shame the campus but to make clear that the campus has no choice but to acknowledge and address the problems,” said Wilcox.

It will be a long time before any results from the visit are known, regardless of whether or not the investigators’ report identifies problems with Whitman’s Title IX policies and practices. While the OCR holds both complainants and institutions to tight deadlines, the OCR can take years to act or give feedback. The OCR investigators who visited campus declined to be interviewed for this article, and the OCR press office did not respond to a request for comment before publication.

“We may not hear from them for several months, if not years,” said Dunn. “I think it’s unfortunate because the reality is [that by the time] we hear about it, many of the students who [filed complaints with the OCR about] our policies and procedures probably won’t be here any more.”