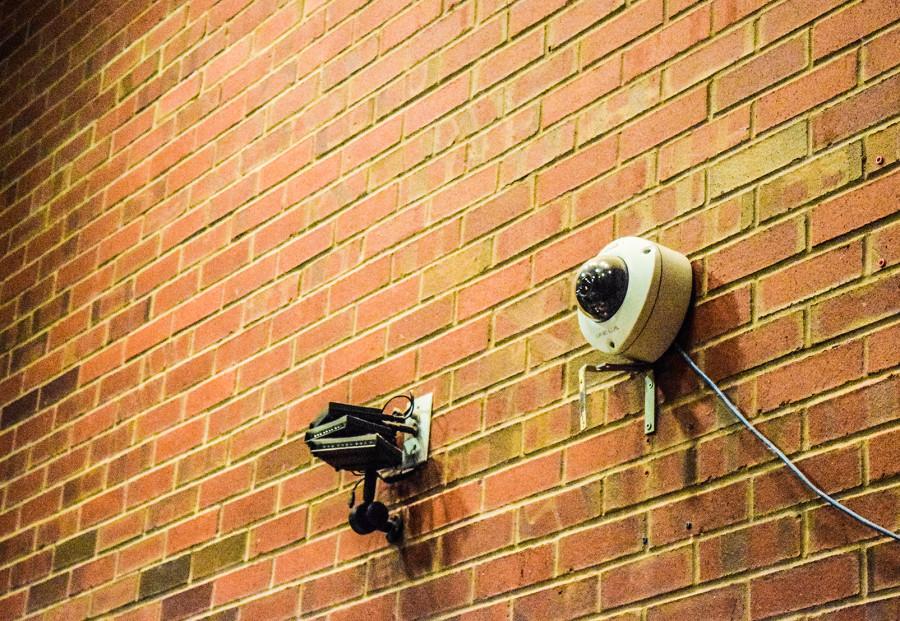 Security cameras are visible around campus, including this one in Reid's Cafe 66. Photo by Anna Dawson.

Over the past several years, the widespread use of surveillance technology has become commonplace both as a tool for law enforcement and for private use.  According to the Walla Walla Police Department and Whitman Security, though, Whitman students and their Walla Wallan neighbors are not under as close of scrutiny as they might think.

On the hyper-local level, Whitman students can rest assured that they are not being watched on campus, according to Whitman Director of Security Matt Stroe.

Though a few cameras are noticeable in campus buildings, including in the Maxey Hall Computer Lab, Stroe says that they aren’t used by Whitman Security, and he offered no comment on their purpose.

When asked about whether student swipe activity is tracked –– logging what buildings students go into and when –– Stroe also said that students are not monitored. Whitman College Technology Services (WCTS) technically oversees swipe records, but Stroe says that data is only tracked when access to a building is denied (i.e., a student trying to enter a building that’s closed).

“They don’t go through and look to see who’s going where,” he said. “The record keeps track of who is denied access [to a building].”

The WWPD uses some methods of surveillance but few of the most controversial tools available to law enforcement.  Stingrays are phone-surveillance devices that imitate cell phone towers, gathering data from phones that connect to them. They have recently come under public scrutiny, and the Washington state legislature has passed a law that would require search warrants for their use. While Stingrays have played parts in several high-profile cases in Washington and nationally in the last few months, they have never been used in any case tried in Walla Walla County, according to WWPD Public Information Officer Tim Bennett. The police department has not contracted with any larger national investigative organization, such as the FBI, to install them.

“We do have dealings with federal agencies that include the FBI, the Secret Service and the DEA, but to the best of my knowledge, we’ve never been approached about them wanting to use that kind of technology here,” said Bennett.  “Which doesn’t mean they haven’t done it without our knowledge, but I don’t think that’s the case.”

The WWPD also does not use wiretaps or similar methods of phone surveillance. The fullest extent of their dealings in phone surveillance, Bennett said, is requesting records from phone companies to “ping” the locations of suspects or missing persons. This process, however, requires approval from a judge.

Other high-profile surveillance methods are absent from Walla Walla. License plate readers, now commonplace in larger cities, use high-speed cameras to keep records of passing cars and alert officers when they find a license plate associated with a wanted person or a suspended or revoked license. While Bennett expressed that a license plate reader would be valuable to the police force, obtaining one is not a high priority.

“I haven’t heard any discussion about getting a license plate reader,” said Bennett. “I think it would be a great tool for us, but it’s also a very expensive tool.”

Among one of the most common forms of surveillance the department has access to is one that practically anyone can use: Facebook and Twitter. Several cases in the past few years have involved evidence gathered from suspects’ social media postings.

“Some of our guys that are social-media savvy will go out and search, looking for evidence of a crime or locations of suspects.  That’s one of the things that helps us, is a lot of these people who are out committing crimes like to talk about it on social media,” said Bennett.

Like all the methods the department uses to solve crimes, however, this measure is typically targeted at specific individuals rather than the public at large.

“It’s a good tool to help us solve crimes,” said Bennett.  “Are we out there looking for information on random people in the public?  No.  We have far too heavy of a caseload to be doing that.”