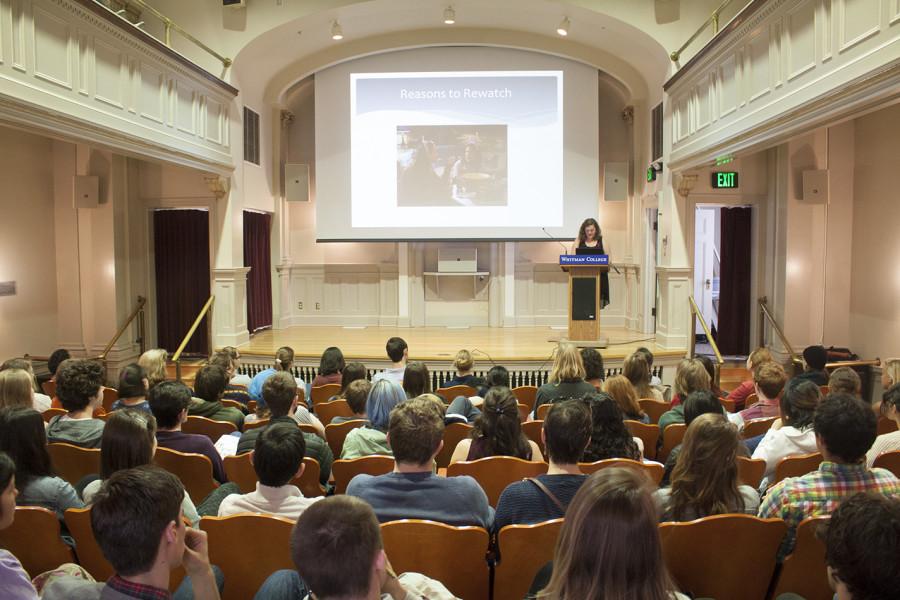 Students present in venues across campus, including Kimball Theater. Photo by Rachael Barton.

For a brief period on Tuesday morning, the Hall of Science Atrium was transformed into a concert hall. Members of the Whitman community lined the stairs and scattered about the room listening quietly as students performed string quartets by Mozart and Onslow. A room full of fossils and plant samples echoed with classical music; the sciences shared a common space with the arts.

2015 marks the 17th year of the Whitman College Undergraduate Conference, a day devoted to appreciating the work of Whitman students and celebrating the interdisciplinary nature of a liberal arts education. Divided into four presentation sessions, one poster session and three musical intermissions, topics at the conference spanned every academic discipline and sometimes included more than one. This year’s conference included 31 panels with four to five presentations each, and 41 poster presentations.

“It’s a wonderful cross-pollination,” said Keith Raether, director of Fellowships and Grants, who coordinated the efforts behind the planning of the conference. “It also encourages a sense of community and a sense of academic citizenship … that emotion of curiosity and inquiry that I think is a tenet of citizenship in general –– in a way, an ethical responsibility.”

Beginning at 9 a.m., presentations at the conference ranged from an exploration of the rhetoric used to justify military action in Iraq to the impact of the cochlear implant on Deaf culture. The presentations of each session were grouped into panels with a common theme.

Raether spoke to the challenge of creating the panels once student proposals were received.

“We have to make panels of all of the proposals, and fitting them in thematically is sometimes difficult, recognizing that we have only a maximum of five spaces for each panel, and so there may be an odd proposal out,” said Raether. “As much as that’s a challenge, it’s also kind of a wonderful exploration because we can try to see how subject matter might resonate across disciplines. Some proposals in a panel seem like an odd mix, yet if you stretch a bit, you get a nice connective link across the disciplines.”

Some panels, like one entitled Reefer Madness, in which members of the debate team explored the implications of marijuana legalization, were already grouped together before presentations were proposed. Individual members of the debate team presented on different aspects of legalization, such as its interaction with constitutional law or international treaty law and how legalization may be seen in light of racial or queer theory.

“Our goal with these presentations is to give a small view of how all of these arguments also interact and do something unique in terms of focusing on a particular thing but coming at it from a bunch of different angles,” said junior Emma Thompson, a member of the policy debate team.

Junior Brynn Walund presented individually on research she did last summer related to the transmission of the HIV virus from mothers to infants through breast milk. Her presentation was included in the panel entitled Diseases and Vaccines.

Recognizing her own privilege, Walund said she wanted to help people who have fewer economic and medical resources.

“It’s something that I think can make a very visible impact,” said Walund. “[The disease] is something that I’ve never had any personal experience with … but I don’t think that’s a reason not to focus on it.”

One well-attended panel at the conference, entitled Media and Message, included a presentation by senior Maria Ptucha that explored the reasons behind rewatching the popular TV series “Gilmore Girls.”

“There’s really no social capital that can be gained by watching Netflix by yourself,” said Ptucha to laughter and applause from the audience.

Ptucha’s presentation, based on her senior thesis in the Department of Film and Media Studies, emphasized the importance and value of emotional capital in the media. She said that she enjoys her major because it gives her the opportunity to both critically evaluate the media and in some cases, create media of her own. Ptucha sees the conference as an opportunity for students to share their hard work with their peers.

“A lot of people spend a lot of time doing really cool work, but because it’s either within a small class setting or its hunched over in the library until three in the morning … it’s often kind of kept insular,” she said. “You might have a friend who is really interested in what you’re doing, but there’s not always a ton of time to really talk about what you’re doing.”

Senior Chelan Pauly, who has attended the conference all of her four years at Whitman, echoed this sentiment.

“I appreciate a celebration of what students are doing with student research,” said Pauly. “This is a great moment to recognize and appreciate all of the research and active academic pursuits that people are taking at Whitman. I think it’s cool for all of the students to go to different presentations and really support their friends.”

For Devyani Gupta, a senior Spanish and psychology double major, the opportunity to write and present her Spanish honors thesis was an avenue by which she could continue to explore a topic she fell in love with her sophomore year. Her presentation analyzed the power of photography in preserving memories of the Argentine Dirty War.

With a wide variety of topics explored at the conference, students had the opportunity to both explore what they love and challenge themselves to learn something new. First-year Robin Rounthwaite did not present at this year’s conference but was inspired by what he saw.

“It gives me a great sort of perspective on what I could be doing in the future,” he said.