Board of Trustees Seeks Stronger Relationship with Campus 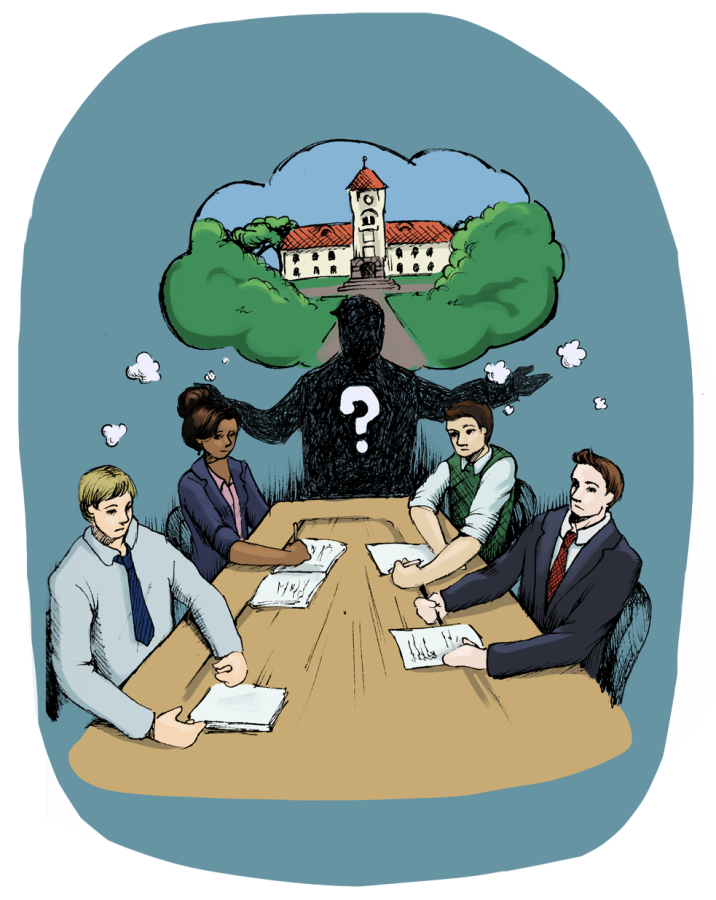 With the search for President Bridges’s successor in full swing, Whitman College students, staff and faculty have been turning their eyes toward the college’s future development. But for the Board of Trustees, the group that will ultimately hire the new college president, looking toward Whitman’s long-term future is a daily practice.

There are currently 17 members of the Board of Trustees, some who live as far away as Maryland, Utah and Hawaii.

“That diversity in location is an illustration of the increased national scope of the college and the roles its graduates play,” said Peter van Oppen â€˜74, the former chair of the Board of Trustees.

Most, but not all, of the board members are Whitman alumni.

“The trustee group represents a diverse set of ties to the college,” said van Oppen. “The one thing they have in common is an affection for the college. We ask each prospective trustee if they are comfortable considering Whitman one of their major priorities for time and philanthropy. We want that level of commitment.”

“I feel like it’s yet another way that I can try to do whatever I can to help Whitman to be the best educational institution it can be and provide students with the best experience they can have,” said Sarah Wang â€˜89, who was elected to the board last year.

New trustees are chosen by the board and serve four-year terms. It is customary for a trustee to serve at least two, and no more than three terms on the board. Trustees are chosen largely for their demonstrated commitment to Whitman College and its mission, which can manifest as involvement in alumni associations, financial commitment to the college or other kinds of service to Whitman.

But when selecting trustees, the board also looks for specific skills and unique perspectives that an individual can contribute to the board, such as investment management skills or diversity in professional and personal experience. This can include the capacity to provide financial support for the college.

Wang explained how board members are willing to work together even when there is a difference of opinion, and that these differences of opinion strengthen the board’s decision-making process.

“You’re going to come up with a better solution once you’ve gone through disagreement,” said Wang.

According to Wang, McMurchie, and van Oppen, the board’s two most important roles at Whitman are to select the next president of the college, and to ensure Whitman’s institutional longevity by growing its endowment. The Now Is The Time Campaign is part of the Board’s efforts to ensure resources are available to the college for years to come.

“Our goal is to raise $150 million by June 2015,” said McMurchie. “Successfully completing that campaign is a huge priority.”

While the next president will ultimately be selected by the board, its decision will be based on the recommendation of the presidential search committee, which includes students, faculty and staff.

“We’re â€¦ trying to work in a spirit of shared governance, that means work with faculty and staff and students â€¦ to make Whitman the best place it can be, given the resources we have â€¦ our job is also to figure out how to sustain the college,” said McMurchie.

While the Board of Trustees has the duty to think about the college from a long-term perspective, it also has a commitment to represent the interests of current students, faculty and staff at the college. The board honors this commitment through student representation on seven of the 15 governing board committees, such as the diversity committee or the academic affairs committee.

Sophomore Brenna Feeney, a student representative on the student life committee, explained how her experience on the committee has changed her understanding of the Board of Trustees.

“It’s nice to meet all these people that are behind these decisions â€¦ and to know the intentions behind it, rather than [seeing it as] some lofty measure from above,” said Feeney.

But Feeney also stressed that the board could improve its relationship with students, staff and faculty by better seeking their opinions and feedback before they make important decisions.

McMurchie agrees that the board should improve its strategy for engaging with campus, especially students.

“It’s really critical that the board play a role in creating the best climate possible for people to speak with and engage with others on campus. We need to be a role model for that,” said McMurchie.

van Oppen also spoke about the shortcomings of the Board of Trustees system.

“I think one of the obvious downsides is that the average age of the board is probably somewhere in the 50s, so you can get insular perspectives,” said van Oppen. “The trustees don’t necessarily represent a parallel cross-section of all of our constituencies, so I think the need to listen to the faculty and to students is paramount.”