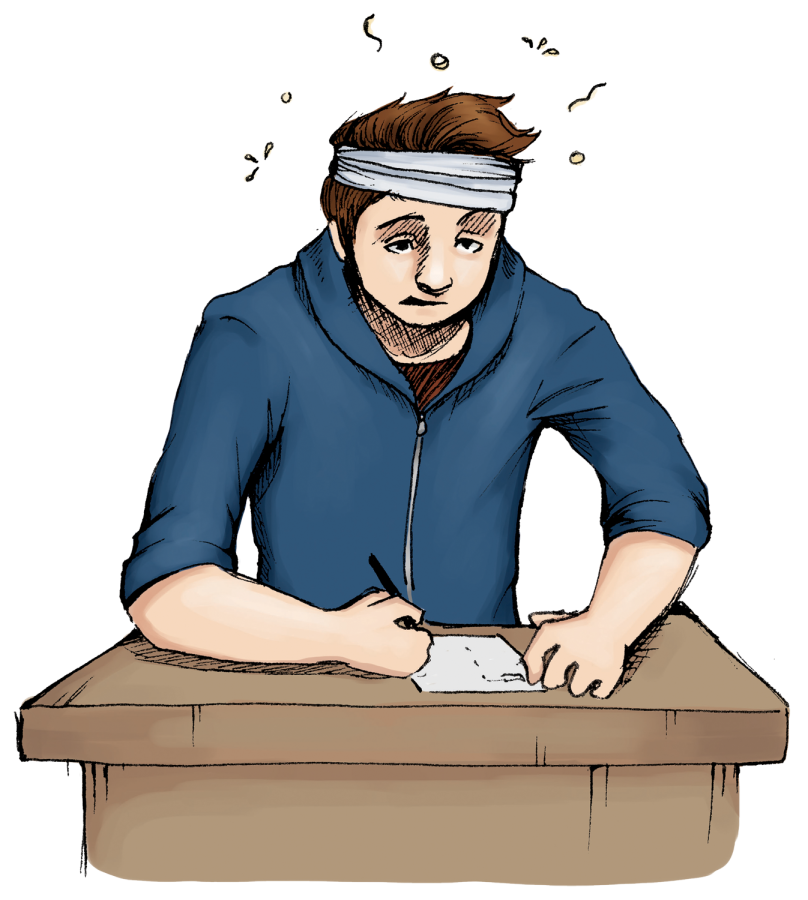 Thirteen concussions were reported to the Dean of Students in Fall 2013, a sharp increase from previous years. This number is shocking, but it might not indicate an increasing number of head injuries on campus. Rather, students and staff believe that higher numbers were reported last semester because of heightened awareness about the seriousness of concussions and their impact on the brain.

Concussions are defined as mild head injuries, but they can be devastating for students because they must put academic work aside while symptoms persist. While some students heal in a matter of days, others continue to experience severe symptoms for months or years after the initial head trauma.  The only effective treatment for a concussion is allowing the brain to rest, so taking time off from classwork is often the only way to recover fully from the injury.

Concussions can be poorly understood, and their impact on the brain is often underestimated. When senior Hannah Fadenrecht first hit her head during a rugby game in the fall of her sophomore year, she didn’t realize it was a concussion.

“I thought I was sick with a cold,” said Fadenrecht. “I just felt a little fuzzy, and a little out of it. The symptoms are really subtle.”

It wasn’t until she injured her head again a few weeks later and began suffering more severe symptoms that she was diagnosed with two concussions.

Concussions can be difficult to recognize because they have a variety of symptoms and because they don’t show up on CT scans. The concussion discharge instructions distributed by the Welty Health Center list headache, vomiting, loss of consciousness, confusion, restlessness and vision difficulties among the wide variety of effects a student can suffer from after a concussion.

Fadenrecht experienced many of these symptoms after her second concussion and continued to suffer from headaches, sensitivity to light and other troubling effects for many months.  These symptoms made it a struggle to complete academic work.  At first, Fadenrecht tried taking a few days, then a few weeks off from her courses. But when symptoms persisted, she decided to leave Whitman for the rest of the semester, with advice and support from Dean of Students Chuck Cleveland and her family.

“I realized that I needed to go home and recover,” she said. “And it’s a really good thing I did.” Fadrenrecht will be graduating a semester late, but has recovered completely from the injury.

Because the symptoms varies widely from case to case, it can be difficult for a student to know how much time they should take off from school after a concussion, if any.

“Everything is absolutely so individual,” said Director of the Health Center Claudia Ness. “You don’t know how long it’s going to take [to heal] and that makes it a little tricky to schedule your academic life around, not knowing if you’ll be up to taking a test in two weeks or a month.”

Ness emphasized that brain rest is the key treatment for a concussion.

The Dean of Students Office and the Academic Resource Center offer a wide range of support to students with concussions, encouraging students to be excused from classes or take tests with special accommodations according to the students’ need.

“We do everything we can to accommodate their illness,” said Associate to the Dean of Students Donna Cummins.

But because concussions and their effects are poorly understood, it’s not always clear what support a student requires. When working with staff and faculty at Whitman to accommodate her academic work when she returned to school, Fadenrecht said there was sometimes a lack of understanding about her needs.

“They wanted to be supportive,” she said. “But person to person, they might not know anything about the effects of a concussion.”

But awareness is increasing, and the college is making an effort to give students the help they need in this situation.

“People are realizing that concussions are something that need to be looked at,” said Ness.

Senior Libby Arnosti received two concussions in 2012 while participating on the Whitman’s swim team, and she had to delay graduation by a year because of the injury. Arnosti said that athletics trainers and the athletes themselves are becoming more sensitive to concussions.

“Because people know more about them now, it’s easier for the training staff to identify them,” said Arnosti.

Students and staff believe that increased awareness explains the recent increase in concussions reported to the Dean of Students Office.

“I think in years past students have had almost as many accidents,” said Ness, “but we didn’t realize that the hit on the head could have consequences down the road.”

However, students won’t be able to receive accommodations if they don’t report their concussion to the Dean of Students Office. Because of rules about patient privacy, the health center cannot report a head injury.

But not all students who have suffered concussions have had to ask for support or accommodations. Senior Ethan Parrish did not have lasting impacts after he suffered a concussion while playing ultimate frisbee at Whitman. The concussion occurred at a tournament just before spring break in 2012.

“By the time I got back to Whitman after spring break, I didn’t have any more headaches,” said Parrish.

But this was the sixth time since middle school Parrish had been taken to the hospital for a concussion. All of his concussions were diagnosed as severe because he lost consciousness on each occasion, but he hasn’t experienced any significant long-term impacts.

“I feel like I’ve been super lucky with the lack of symptoms given the head injuries that I have suffered,” said Parrish.

While Parrish has been able to continue playing ultimate frisbee at Whitman, other students have had to either scale back or quit their athletic participation after a concussion. Fadenrecht decided to stop playing rugby after her two concussions in 2011.

Arnosti still deals with symptoms every day, even though it’s been over a year since her last concussion.

“There have been a couple of days in the last 14 months where I haven’t had a headache,” said Arnosti. “It’s had a pretty major impact on my life.”