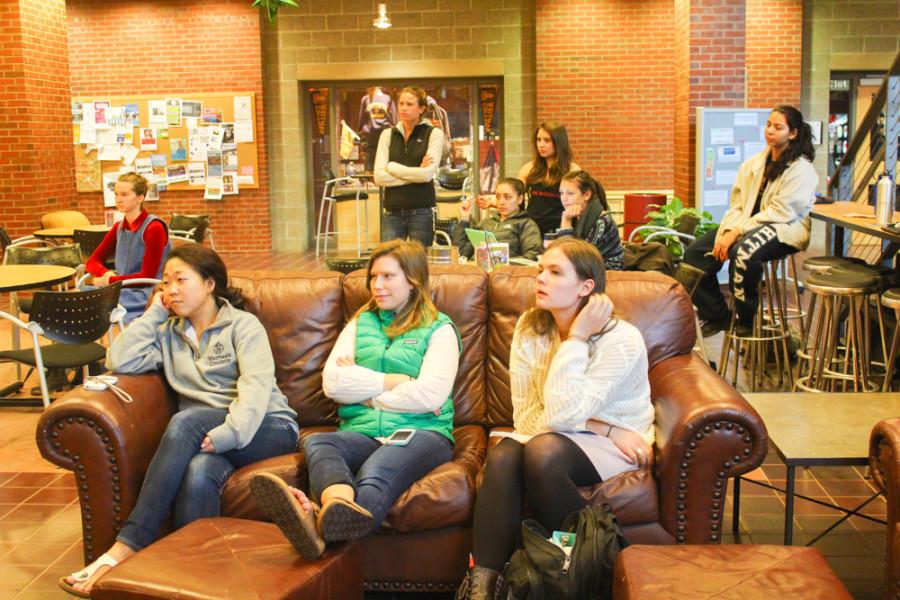 It’s that time of the year again: The boys are back in town, and eight contestants are eager to take the stage to become the one, the only, Mr. Whitman.

Trilogy Recovery Community is a youth support group for adolescents struggling with addiction. It is a local non-profit that has served the Walla Walla community for 10 years.

“In my personal experience, with a support group like this, people who are struggling with addiction or find themselves in a hole can find a way out,” said Rina Wulfing, the philanthropy chair of Kappa Kappa Gamma.

There are eight contestants: four independent men and one from each of the four fraternities on campus. Leading up to the pageant, the role of the  contestants is to organize fundraisers in support of Trilogy. Each contestant has a “posse” composed of four or five Kappa members to help them raise money, brainstorm ideas and run events raising awareness of Trilogy.

“Some fundraisers raise more awareness than money, which I think is great,” said Wulfing. “Some of them walk away raising $20, but those represent 20 more people who are aware of Mr. Whitman and aware of Trilogy.”

Independent senior Ethan Parrish has raised money by donating 100 percent of the profits from his photography business to Trilogy. In addition, he auctioned off the right to shave his beard and head. During Family Weekend, Parrish organized a 5K run, with the participants dressing in costume.

“I’ve chosen these methods for a variety of reasons. The photography lends itself to a strength of mine, and as for the on-campus events, I tried to pick events that were inclusive,” said Parrish. “My hope is that people don’t look at it as much a competitive Mr. Whitman event, [but] as a means of raising money for Trilogy as well as a fun charity event.”

Senior Casey Minnick of Sigma Chi began fundraising over the summer, selling ice cream sandwiches that he made in his sister’s restaurant. He has arranged deals at local restaurants such as Maple Counter and Sweet Basil, where a percentage of their profits go to Trilogy, in an effort to draw people from the community. However, Minnick is not driven by the desire to hold the title of Mr. Whitman.

“I’m less concerned with the title of Mr. Whitman itself and more concerned with raising money and supporting a great cause,” said Minnick. “Once I met with Trilogy, I realized that I had a huge opportunity in front of me to help the Walla Walla community. It’s important to me that I can give back to a place that has supported me for the last three years.”

Senior Tristan Gavin, representing Tau Kappa Epsilon, organized the Date-A-TKE auction, in which participants could bid on certain TKEs to take out on a date. He also released a solo ukulele album of cover songs called Bad Music, Good Cause: Live from the Romper that he has been selling for Trilogy.

“Tristan is extremely passionate about the great work that Trilogy does and is especially excited that it is a local charity. Winning Mr. Whitman would probably be the capstone of his senior year,” said senior Cristela Delgado-Daniel, one of Gavin’s posse leaders. “Regardless of the outcome, he is incredibly appreciative of everyone’s generosity and excited to be supporting such a great cause.”

Gavin has been selling quesadillas at campus parties and has been fundraising by letter as well. He has also established a website where donors can directly pledge money.

Beta Theta Pi senior Zach Johnston has organized two events: an all-campus dodgeball tournament and a trivia night titled “Are You Smarter Than a Beta?” He also created a website to kick start funds. Johnston stated that the key to raising money is reaching out to both the Whitman community and the broader Walla Walla community. He believes that everyone is a winner in this competition.

“All the Mr. Whitman candidates are deserving of being Mr. Whitman. Anyone willing to sacrifice for a cause greater than themselves automatically qualifies as Mr. Whitman material,” said Johnston. “As Whitman students, we spend four years in this gorgeous town, and it’s great to be able to give back.”