Rising in Number: Faculty Adjust to Swell in Number of Biology Majors 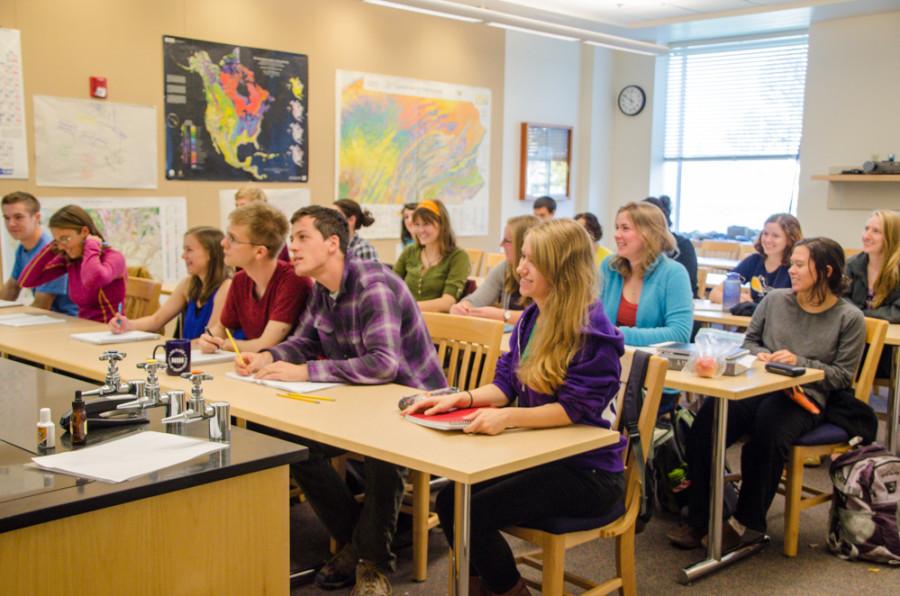 The graduating class of 2014 has 97 Biology majors, the highest number of graduates in one discipline ever to graduate from Whitman College.

The current surge has left the life science department scrambling for ways to accommodate these students, both in providing enough faculty for classes and providing adequate facilities.

“We’ve been treading water and doing the best we could for a number of years, but now we’re at the breaking point,” said department chair and Associate Professor of Biology Delbert Hutchison. “We’re working on it; it’s just not happening as fast as some of us would like.”

Anticipating this surge in enthusiasm about life sciences, the biology department restructured their curriculum at the start of the 2011-2012 school year. The new graduation requirements are more lenient, leaving only three required classes for the biology major. This change helped distribute students among classes, making the class sizes manageable for professors and making other academic opportunities, like studying abroad, more available to students.

“[The biology department change] was really nice for me because it allowed me to go abroad, and it makes it easier for biology majors to take classes and graduate on time,” said senior Cindy Chang.

The Office of the Dean has created a group called the Science Exploratory Committee, made up of faculty and staff, in order to manage the extra faculty work that accompanies an increase in students.

“How do we get these kids to retain the ability to major in what they want to major in and get through in a timely manner without having massive classes?” said Hutchison. “That’s a complicated problem.”

The committee has looked for short-term and long-term solutions to decrease large class sizes and accommodate for the statistical increase in biology majors. Some short-term solutions have been introduced, including hiring two extra faculty members next year to teach lower-level and higher-level classes. Long-term goals to come within the next five or six years include bringing in professors for tenure and then, if needed, expanding facilities.

All of these plans are tentative, though, because they depend upon the trend of student interest. The faculty and staff are attempting to find ways to solve the dilemmas that a large class can bring, but they are still puzzled as to why this sudden shift in student interest towards the life sciences has occurred.

“I’ve talked to colleagues of mine from other colleges and they’re saying the same things [about the increase in biology majors],” said Carl E. Peterson Endowed Chair of Sciences Paul Yancey. “No one seems to know why exactly, but there’s not much we can do if it’s a national trend.”

According to CollegeStats.com, biology is the most popular major in the United States. Why is the biology major suddenly a national trend? Yancey and Hutchison believe that one explanation for this trend is the large number of job prospects that come with a biology degree. The increase in biology majors at Whitman coincided with lags in the economy, such as the one in 2011, and one theory is that a biology major is correlated with desire for a job. According to Yancey, a biology major can be a bridge to a large job market, such as positions involved in the emerging fields of healthcare, genetic engineering and environmental restoration. Another theory that Yancey suggests is that the life sciences are increasingly widespread in the media.

“Biology itself is in the news all the time, whether it’s climate change or other environmental problems, health care, genetics or genetic engineering,” said Yancey. “It’s in the news at every level, from the molecular up to the ecological, and it could just be that interest is growing from that.”

Whatever the reason, Whitman faculty and staff are attempting to find ways to accommodate the emerging interest. Among the staff, problems arise from the larger number of students in each class.

“When you come to Whitman and you pay 40 grand a year, you have certain expectations in terms of quality of instruction, which you’ve got because we have great professors,” said Hutchison. “However, when a professor has a big number of students in classes, it puts pressure on everybody, and that’s what we’re trying to get down.”

Unlike its effect on staff and faculty, the major size is mostly imperceptible to the students, who have become used to large science lecture classes in their four years at Whitman.

“Even though the class is relatively large, you see each other all the time in lab, and you also work on projects together, so there’s definitely a strong sense of biology community despite its large size,” said senior biology major Livingston Martin.

The reason for the increase in biology majors remains uncertain, but its impacts are nonetheless felt by the faculty and, in smaller ways, the students. The major appears to continue to draw interest, and Whitman faculty and staff will continue to address and control this interest to the best of their abilities.