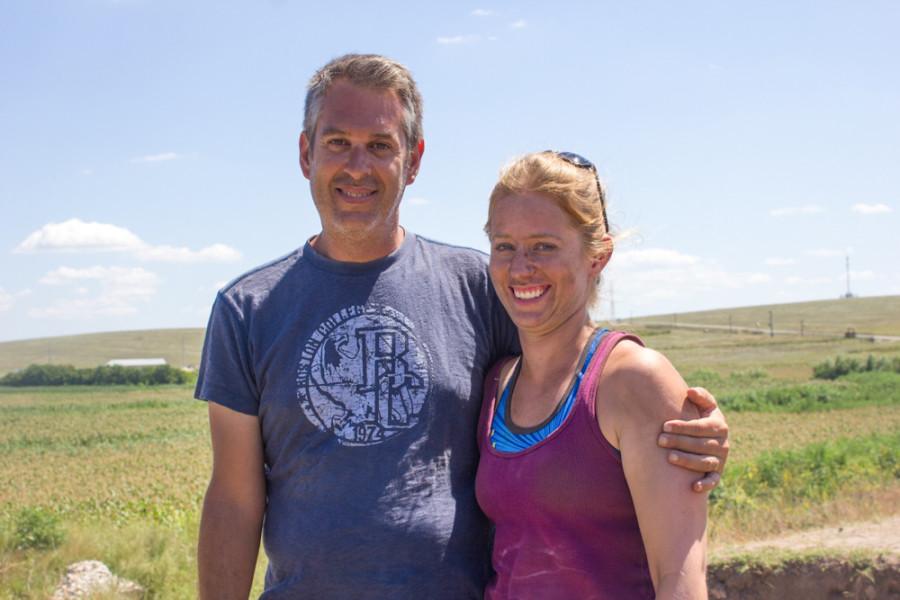 This article was contributed by alumna Marie von Hafften ’13.

As dawn broke every morning this summer, alumna Emily Hanscam ’12 tucked the end of her braid back up at the nape of her neck and slipped on her work gloves. By lunchtime, she would be blanketed with powdery dirt and winking, stealing sips of iced coffee. Her joy was palpable.

“My mom likes to say, you want to do something that fills your bucket, something that gives you a sense of completeness and happiness,” said Hanscam. “Well, maybe you are not happy working in the hot sun for hours, but the end result gives you what you want out of your life.”

For Hanscam, a rural village in Romania holds a source of her joy. Since graduating with a double major in anthropology and history from Whitman College a little over a year ago, Hanscam has become the assistant site director and site manager of excavation at Halmyris, a busy fort that lay at the edge of the Roman Empire. Over the past two years, Hanscam has helped ten other Whitman students and alumni join evacuation efforts at Halmyris. She aims to bring many more.

Halmyris is a rich historical site to excavate. Located at the confluence of the Danube River and the Black Sea, the strategic positioning of the fort prompted seven centuries of military and civilian settlement. Halmyris is of religious interest, as well. Inside the fort walls, archaeologists discovered an ornately painted crypt holding the two oldest Christian saints in Romania – Epictet and Astion, martyred in 290 CE.

“The complex web of forces at play in this area is fascinating,” said Hanscam.

“It’s like a treasure hunt,” said senior Rosemary Hanson who excavated at Halmyris in 2012. “But instead of treasure, you are looking for the stuff that fell between the couch cushions. A single earring, part of a wine glass, some nails, some coins, a key – stuff some Roman soldier was sure he left in his other pants, but just can’t find it.”

Alumna Alex Norman ’13 dug alongside Hanson and shares her awe.

“There is a sneaky awesomeness to the site … There were moments when I felt absolutely overcome by what we had pulled from the earth.”

“These things are thousands of years old,” said Hanson.

While both Hanson and Norman are anthropology majors, academic background in archaeology is not required. This summer the Whitman students who worked at Halmyris came from a variety of majors including astronomy and theatre. Site director John Karavas is used to training students as they come.

“I have always accepted the fact that there might be mistakes [made by students],” said Karavas. “I think of it as a continuation of the usual classroom context … This is the time they get their hands dirty. They get to see exactly what pottery is about, what coins are about and what other material culture is there: how you deal with it, how you dig it.”

Since excavating at Halmyris in 2012, senior Melanie Medina says she has a new appreciation for archaeological work.

“My dig experience made spending time at other ruins, specifically the temple and monastery complexes in South and Southeast Asia, much cooler; it’s so much fun to imagine excavating the fantastic structures that I explored on vacations,” said Medina.

Hanscam’s efforts publicizing Halmyris at Whitman have opened a new opportunity for students interested in archaeology. Hanscam’s interest in sharing the experience has also led to an expanded position for her at the site.

“Between 2011 and 2012 there were three times as many people [digging at the site],” she said. “Logistical things that weren’t an issue with six people became a big issue with more people. I just started taking care of it.”

“She’s one of the most hardworking people I have seen on the site and also [has] a really good nature,” said Karavas. “She always gets along with students and you need that kind of click.”

“Hopefully one day I will be a director,” said Hanscam.

She and the site directors plan to establish a bigger field school, expand available funding for excavation and site preservation, improve local knowledge about the site and help to integrate it into tourism efforts in the area.

Meanwhile, Hanscam is excited to continue sharing Halmyris with other Whitman students. It helps excavation efforts expand and may “fill the bucket” of someone new.

Junior Kelly Chadwick went to Halmyris in 2012 after her adviser noted her interest in archaeology and suggested she meet Hanscam over lunch.

“I actually came back certain that archaeology wasn’t what I wanted to do, [but] the Halmyris dig was one of the best experiences of my life,” said Chadwick. “I was just so incandescently happy while I was there. Romania is so, so beautiful and the other students were just so wonderful.”

Chadwick’s good experience is echoed by the other Whitman students who have excavated at Halmyris. Medina says she highly recommends participating in excavations.

“If you have the time and money, being a part of a dig is a one-of-a-kind way to learn about history up-close and in-person,” she said.

“I returned to Whitman with new information about what archeology is like outside of the classroom,” said Hanson. “I also returned with the beefiest shoulder muscles from all that shoveling.”