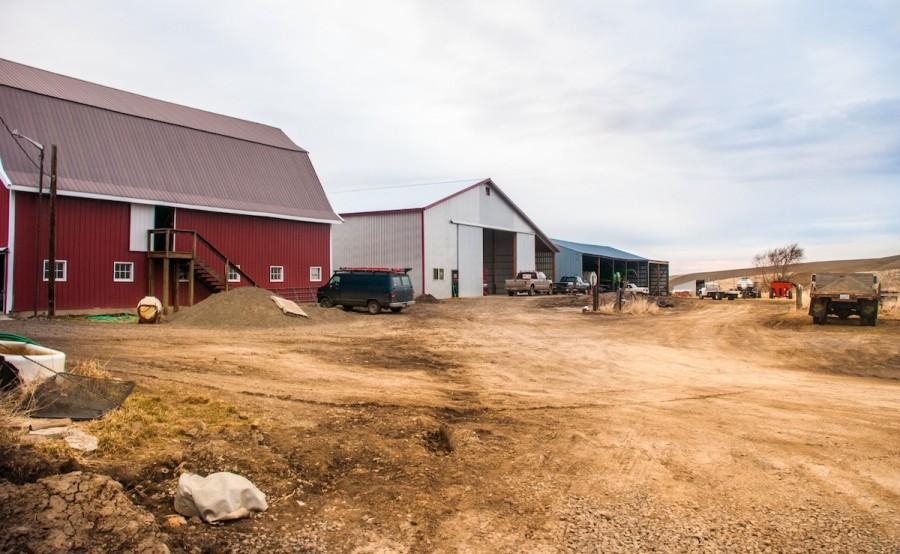 The Hutchens farm, just outside of Dayton, Wash.

“You want to know how farming has changed? Come here.”

Bob Hutchens motions for me to follow him into a large, grayish-blue shed that sits on his wheat farm just outside of Dayton, Wash. The ground is littered with wood shavings and other detritus which gives the impression that serious work happens inside.

Bob opens a door and takes me into a gigantic room which seems tiny, because almost every square inch of it is filled with a massive tractor.

“Climb on up there,” he directs, gesturing to the small metal steps leading up to the tractor cab. I comply, walking 10 or so vertical feet, and he follows, telling me to sit down. Inside the cab, he shows me a GPS and a screen which allows you to digitally control everything from the amount of fertilizer spread over the field to the route the tractor drives. You can fully automate the planting and harvesting of an entire wheat farm from inside the air-conditioned tractor cab. It’s a state-of-the-art machine which costs tens of thousands of dollars new. This, Bob tells me, is what modern wheat farming looks like.

About 30 miles east of the Hutchens’ farm, two nondescript red buildings, built to look like barns, sit on the fairgrounds outside of Pomeroy, Wash. Pomeroy is both the county seat and the only town in Garfield County, which has the honor of being the least populous county in Washington State (population 2,266 as of the 2010 census). The county is home to about 200 farms, the majority of which grow wheat and are individual or family-owned. It’s a fitting place for the Eastern Washington Agricultural Museum, which has recently expanded into its second building.

Upon getting out of my car I am immediately greeted by David Ruark, who acts as secretary and treasurer for the museum. He’s thrilled that I’ve come all the way from Walla Walla, 66 miles down the road, to have him show me around. The museum’s president, Jay Franks, is my other tour guide, and the two of them are passionate about preserving the history of agriculture in the region.

Jay tells me that some people in the county were a bit skeptical when the museum first got started: “Some people said it was an idea for a place for some guys to put their tractors,” he laughs.

Inside the museum’s main building, there’s an impressive and diverse assortment of equipment. As expected, an old tractor, as well as a massive combine built in the 1930s, take up a good chunk of the room. But it’s not all farming equipment: A collection of horseshoes hangs on one wall, and there’s a replica of a farmhouse kitchen, complete with a wooden stove, an old washing machine and even a jar of marbles in the cabinet. Everything works by hand, it seems––the sewing machine, the vacuum, the washboard. There’s a model of an old tractor being hauled by a team of 34 horses.

David and Jay are eager to show me everything in the building, especially once I confess that I’m originally from Seattle, a city slicker still learning her way around wheat farming country. David leads me to the table of mystery artifacts, taking great delight every time his “What do you suppose this does?” is met with a look of strained confusion from me.

The county, the two of them explain to me, used to have a tram for hauling wheat from the road down to the river, where it was shipped out by barge. It ran without power, just the weight of the grain pulling full buckets down to the river and empty ones back up. Like most of the things in the museum, the tram has been replaced by a more efficient, modern and mechanical system. Jay tells me it’s important to remember this history.

“It’s kind of going by the wayside,” he says, shaking his head just a little. The museum is run by volunteers, and many of them are old enough to remember the days when horses pulled tractors and soil was tilled more or less by hand. Jay says they’ve been trying to videotape older members of the community telling stories or sharing information about how to use equipment so the knowledge doesn’t die out with that generation. He hopes the museum can be at once an archive and a form of living memory, that in the absence of elders, some measure of farming spirit and a love of hard work can be passed on to whatever segment of the younger generation is willing to learn their way around a tractor. But I see worry in his eyes as he tells me what every farmer of a certain generation knows: that the average age of the American farmer is rising, that fewer and fewer children are coming back to make a home amidst the spring wheat.

It’s a story Bob Hutchens knows all too well. He’s over in Columbia County, Garfield’s slightly more populated neighbor, but the outlook isn’t too different from where he sits. His great-grandfather Tyra moved to the Walla Walla Valley in 1873, heeding the “call of the west,” according to the obituary published February 13, 1920. Of his 11 children, Bob’s grandfather Chester (or Chet, if you’d rather) was the one who decided to try his hand at farming outside of Starbuck. He went broke the first time he tried, got himself some more money and started up another farm. By this time, he’d had a few children, including Bob’s father Dale.

“He put some money on another place and darn if the Great Depression didn’t happen and he went broke again,” Bob said.

When Dale first started helping around the farm, equipment was pulled by horses––a far cry from the state of things just a generation later, as Bob points out to me. Dale joined the service and later became an insurance salesman in St. Louis, but his heart was always in the valley, and he was eventually able to come back. Bob was raised on the farm and loved it. After studying agronomy at Washington State University, he bought the family’s current farm in 1980, and in 1989 he moved into the farmhouse where he lives now.

Bob has a passion for science, and he’s especially excited about the advances which have given farmers the information they need to better conserve soil and practice crop rotation. He tells me he used to write a column for the Dayton Chronicle called “Soils and Men,” but that farming well takes more than scientific aptitude. The label “farmer” transcends occupation to become an identity. He knows this from watching his father, who had farming in his blood and who was still at it until he died at age 93.

“You walked into the room and that was what he wanted to talk about. He would have wanted to be on the tractor at 93 if he was physically able,” says Bob.

Even that passion isn’t enough to keep a farm going. As machinery has made farm work more efficient, it’s also raised the bar for getting into the game. A brand new combine runs almost half a million dollars these days––enough to buy you a house or two in a town like Dayton. This shift means that farmers have had to choose between going big or getting out if they want to stay economically viable.

“I’ve never seen a wheat farmer that’s small these days unless they have a good day job.” Bob’s tone was lighthearted, but grows thoughtful. “When I was a kid, there was a lot more houses in the county than there are now.”

I ask him how common it is for children to go to college and study things like agronomy before coming back to the farm. He pauses for a long time, then shakes his head slightly before answering me.

“I think there’s a lot of them going to college, but not a lot are coming back,” he says. “It’s so capital-intensive, it’s frightening.”

The kids-leaving-the-farm narrative is an old one, and it has some truth to it. But farming in Dayton, much less farming on the Hutchens’ place, doesn’t seem to be in its death throes when I visit. After chatting with Bob in the kitchen, I spend a few minutes roaming around his shop snapping photos. Bob’s son Clay, who’s older-but-not-too-much-older than me, waves, and I walk over. Clay was welding when I arrived, and has since switched to cutting metal chains off a complicated piece of machinery, apparently called a chisel, which is used for primary soil tillage.

Glancing from Clay back to myself, I notice the obvious differences between our environments. I’ve driven out to the farm in a red two-wheel-drive Kia, and every other vehicle in sight is a good couple of feet taller than I am. I’m clad in the standard northwest college student outfit of jeans and a North Face jacket, barely sufficient to keep me from shivering in the unusually cold February wind. Clay’s coveralls are streaked with grease, and he chops pieces of chain off of the machine effortlessly. It looks to my untrained eye like he understands the way each and every piece of equipment works in intimate detail. His eyes remain laser-focused on his work even as he talks to me.

He asks me what I’ve learned about farmers. I tell him that the individuals I’ve met are different, but they all seem a little crazy, trying to make a life like this in a world where that seems to be getting harder. He considers this for a minute and nods with a smile.

“You’re probably on to something,” he laughs.

We talk for a few minutes and end up discussing what I’m doing out on his dad’s farm in the first place. I tell him that I’m hoping to stick with the journalism thing and get a job in the field, maybe even one paying enough to get me a roof over my head. He laughs, because it’s 2013 and we both know what the Internet has done to newsrooms across the county. I offer, “I guess that makes me a little crazy, too.”

“But you do it because you love it and you’ve got a passion for it,” he says, and turns back to the chisel, which he thinks he’s almost fixed. It’s a giant piece of equipment, and when it’s ready, it will be dragged across acres of field by another massive tractor, not too different from the one Bob sat me in to show me the changes he’s seen.

Though Bob is getting to an age where most men think about retiring, the family’s future seems solidly tilted towards farming. Clay will be responsible for more acres of ground than his grandfather and great-grandfather were, and he’ll watch over the wheat with a combination of scientific knowledge and agricultural technology that was unavailable to previous generations. His love for the farm is clear, the kind of love that lets you shrug off 60-hour work weeks during harvest and settle for a life you know will never make you wealthy.

As I’m driving home, I pause to snap pictures of the farm from the road, and I see where they’re building a new shop to house the larger pieces of equipment, changing the farm to fit the world outside of it. I think back to what Bob told me about his father wanting to ride tractors at 93, his grandfather going broke twice but not giving up, and I see them making it work, finding a way to grow some kind of a life out of the soil in this valley.