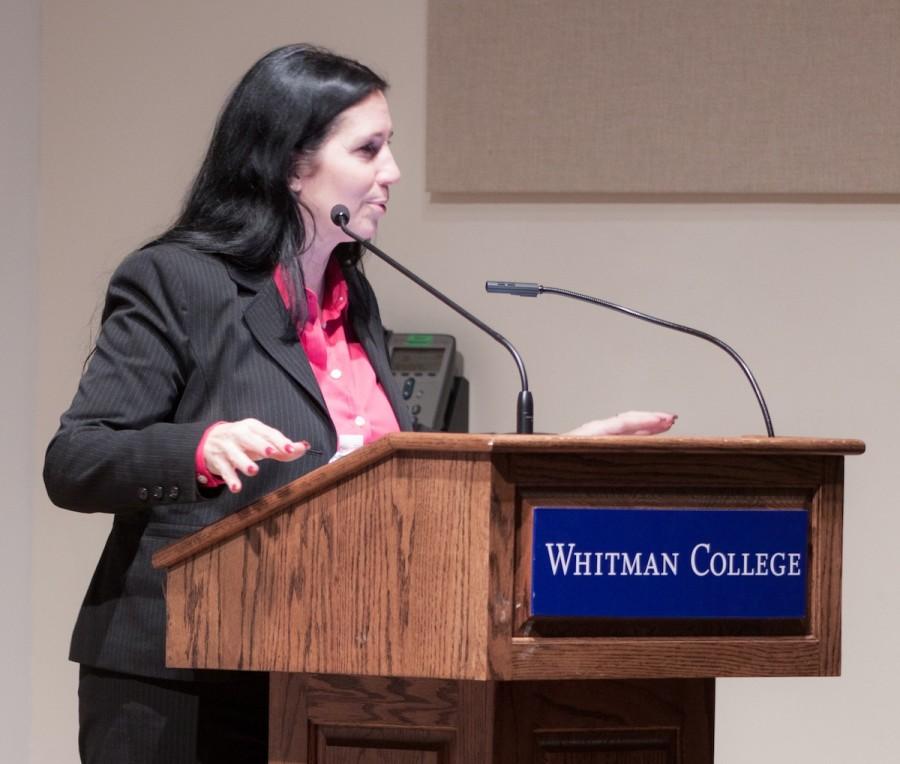 Honkala, the Green Party nominee for vice-president in the 2012 U.S presidential election, has been fighting homelessness and poverty since her childhood, and is currently the leader of the Poor People’s Economic Human Rights Campaign. In addition to her recent national campaign, Honkala’s history in political participation is rich: She has marched and protested for changes in public policy regarding homelessness and poverty, testified before Congress and ran for the position of Sheriff of Philadelphia for the Green Party.

Honkala began her inspiring talk with stories of her childhood, spent in nine different institutions after being taken away from her mother. She recounted the shame she felt after learning her circumstances were less than many of her peers.

“I learned if you were going to be poor in America, you had to be ashamed to be poor,” she said.

She learned to speak up at a young age, and her powerful voice earned her the nickname “Mouth,” which she says holds true today.  Her current efforts lie mostly in anti-homeless advocacy, especially with forclosure issues. She works to put people in homes at any cost, preserving what she called a basic human right.

“I adhere to a higher laws of humanity, of keeping people alive,” she said.

A particularly powerful story she shared involved a march she helped lead. Honkala and  70 homeless families marched for 10 days, averaging 22 miles a day to the Pennsylvania State Capitol. When they finally reached the Capitol, they set up camp inside and lived there for six weeks.  After being evicted, they lived on the stairs for four weeks until they were again evicted. This whole time, she recounted talking to officials about policy changes that could help the families she had been fighting with in futile discussion. These experiences led her to work with Poor People’s Economic Human Rights Campaign to move families into abandoned properties.

Even in the recent election, she and her running mate, Jill Stein, encountered injustice. After being denied entranace to the presidential debates, she and Stein were arrested, and, in Honkala’s words, were “locked together to a metal chair for nine hours.”

Through her activism, she has learned the importance of fairness and morality in policy.

“I hunger for justice and learned the importance of raising my voice,” she said.

Senior Meaghan Russell, who met Honkala when she interned for in Philadelphia for her through the Poor People’s Economic Human Rights Campaign her junior year, was inspired by Honkala’s activism and passion. Russell was one of the first people on campus to consider bringing Honkala to campus to speak.

“I thought she would be a really great voice to have on campus,” said Meaghan.  I talked to the Politics and Sociology departments about sponsoring her talk, and WEB and the SEC taught me how to organize an event like this.”

Honkala’s talk allowed students and community members in attendance to understand homelessness and foreclosure to be extremely important issues in our country. She encouraged reflection and activism on the current political agenda.

“We live in a land of abundance. It’s a question of priorities,” she said.