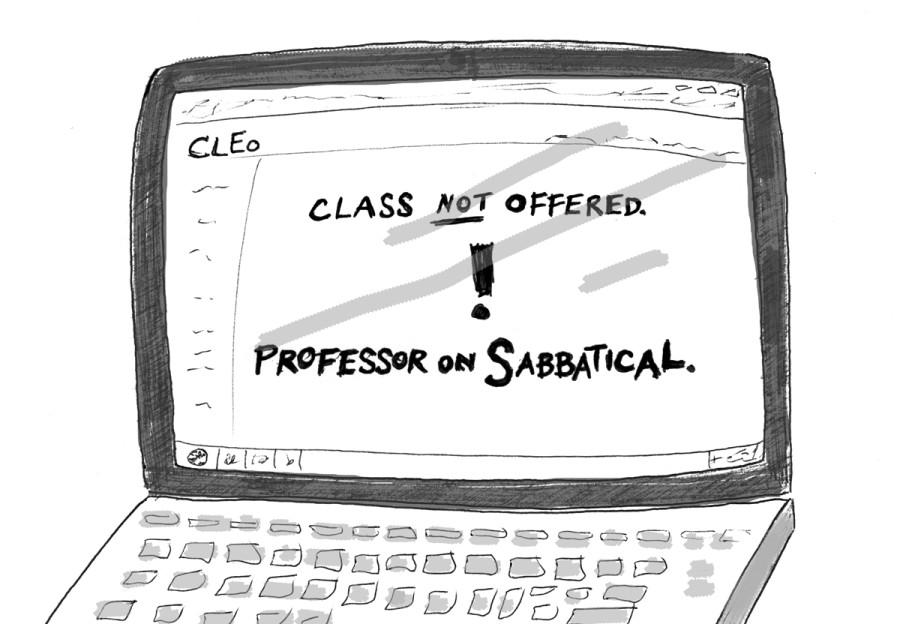 For faculty at a non-research-oriented school like Whitman, sabbaticals can be a much-needed time to further their research and catch up on recent developments in their field of study. But the time they take to accomplish this can sometimes clash with the needs of the students they advise.

According to Provost and Dean of Faculty Tim Kaufman-Osborn, the Board of Trustees approved a program of year-long sabbaticals in 1962 intending to attract strong candidates for open faculty positions. They also hoped to encourage faculty members to engage in publication and creative endeavors and to meet professionally with other colleagues by giving them more time away from their classroom obligations.

Many professors taking and preparing to take year-long sabbaticals do believe that their time working on projects outside the classroom is improving their careers in other ways.

Associate Professor of Religion Melissa Wilcox, who will embark upon her year-long sabbatical in the fall, plans to spend the year accumulating her research into a book. This research is an integral part of every tenure-track professor’s job. However, Wilcox points out that this research is difficult to do when one has a large teaching load.

According to Wilcox, there are  three expectations for any tenure-track or tenured professor at Whitman: teaching, research and a general category called service. For most professors, however, the teaching load makes it extremely difficult to do research during the school year.

“So basically, we have roughly three months of the summer to get a year’s worth of research done and, for many people, to work on their courses for the following year. Even at the very most prepared stages … you can maybe squeeze the writing of a book into six months. It’s very difficult to do it in just summers, which makes the sabbaticals very useful,” said Wilcox.

Some professors use their sabbatical time to complete additional training so that they can improve their teaching abilities.

Dana Burgess, professor of classics at Whitman, is currently on a year-long sabbatical so that he can attend the School of International Training (SIT).

“I am matriculating in a one-year program leading to the degree of Master in Arts in Teaching English to Speakers of Other Languages … Whitman has generously allowed me this sabbatical because it will let me develop an expertise in an area which is important to the college,” said Burgess.

A visiting professor is currently teaching the courses that Burgess originally taught.

“My normal course offerings are being covered by a sabbatical replacement. He is teaching both my language courses and my courses in translation, though my rather idiosyncratic Syntax and Grammar course is not being covered. The sabbatical program certainly does disrupt the regular sequence of offerings, but the College tries to minimize that by hiring suitable replacements.”

According to Wilcox, each department is responsible for hiring replacements for the teachers that are on sabbatical each year. The college is moving toward more year-long sabbaticals because it makes hiring replacement faculty easier. Visiting professors are more willing to come to Whitman if they are guaranteed a year-long job rather than a job for six months.

Unfortunately, this means that some students at Whitman could have difficulties with long-term planning.

Because her previous adviser is taking a year-long sabbatical next year, junior Hanne Jensen was left to find a new adviser.

“It’s mostly frustrating. I understand that there are probably good reasons for year-long sabbaticals to happen, but I didn’t know very much ahead of time when certain professors were leaving,” she said.

Jensen believes that the lack of notice is the most problematic aspect of the switch.

“It has affected my overall major planning. Like next year, I am going to take Contemporary American Literature with a visiting professor. It would be nice to plan ahead of time more or not make it a whole year that these teachers are gone,” she said.

Junior Zoe Erb has been fortunate enough that the change hasn’t significantly affected her major planning because she had a jump start on her major studies.

“[Professor Burgess] is definitely one of the reasons I am a classics major. Luckily, having my adviser gone hasn’t had too much impact on my major planning, as I finished my major last semester,” said Erb in an email.

She also said that although some seniors were disappointed not to have been able to take courses with Burgess this year, the other professors in the department have been very supportive.

“But even with Professor Burgess gone, because my department is so small, I know all of the other Classics professors very well and I don’t have any problem asking them for help,” said.

And other students do acknowledge that giving professors the opportunity to take year-long sabbaticals is the result of larger goals.

“Short-term, it is bad for the students. But long-term, it’s probably best for the institution,” said Jensen.

Editor’s note, 6 Feb. 2013 at 17:39: In the article printed on Jan. 31, several transitions misrepresented Zoe Erb’s opinions about the effect of Professor Burgess’s absence on the Classics department. Quotes have been added to indicate that his sabbatical has not negatively affected the department.