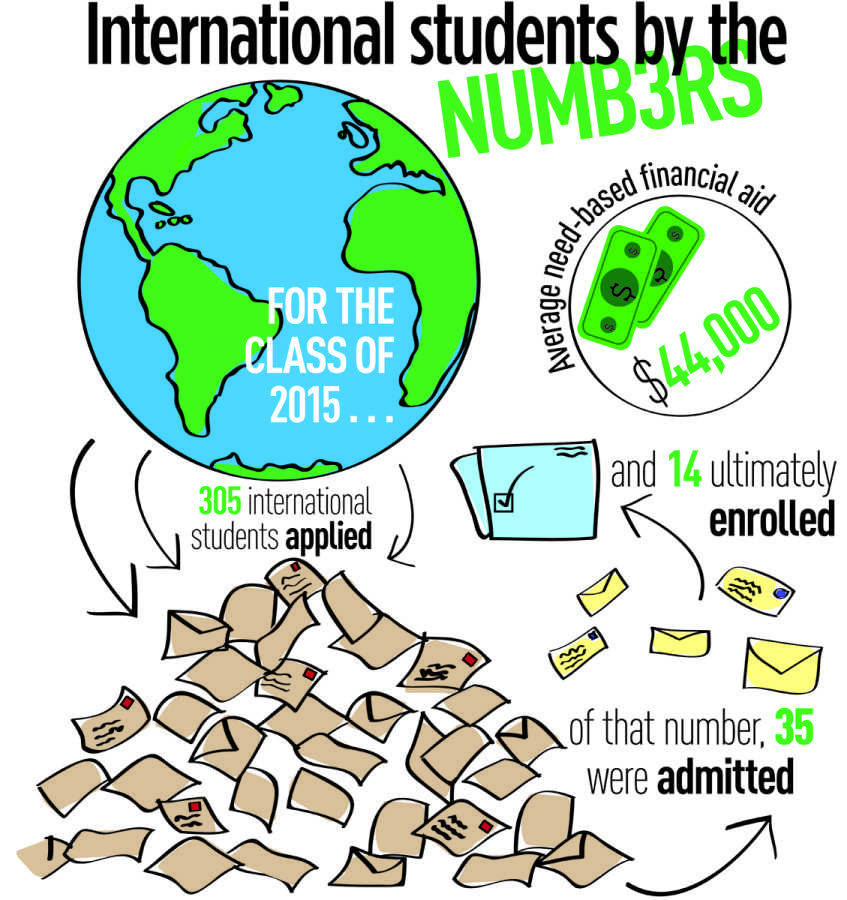 Coming to college means leaving one’s family and friends, but for some students it means leaving one’s culture, language and country behind as well. International students come to Whitman knowing they will be in a place where very few people share their background and experiences. Though nearly all international students end up staying at the college for their whole undergraduate career, there’s no escaping the fact that Whitman is a small college with a small international community in a remote, rural town.

“I came from an international school; I wanted to have a different experience that was not as international,” said senior Marcial DÃ­az MejÃ­a. “It was kind of strange not having that solidarity, a group that shares similar values that I did. In my [previous] school I had friends from all over the world, and I had really good friends from Latin America … when I came [here], in my first year there were maybe two other students from Latin America [who] shared the same values or at least the same language.”

A Matter of Money

“Other than our undocumented students, our international students are the students who Whitman does the most to support financially,” said Smith. “Historically our students at Whitman who are international students have always been very high need, and that’s okay. Because we value their contributions, we didn’t care. That has limited the number we could bring in, but it meant that we were really interested in fully supporting the students to make it as easy for them as possible to study in the United States.”

“One of my friends from Guatemala applied to Whitman, he got in, he got full financial aid from Whitman … but he ended up not coming here because he did not even have the money for airplane tickets,” said DÃ­az MejÃ­a. “Visa costs are not included either, and that’s around another $500 right there.”

International students are also limited in the means available to them to finance these expenses. As they are not U.S. citizens, they are only able to work jobs on campus provided by the college. Many grants and awards, such as the Rhodes and Marshall scholarships, are only available to U.S. citizens.

Another barrier to international students is that the Student Engagement Center does not fund internships for students overseas.

“This is beneficial to all students, from an international student who cannot go home and do an internship because it’s outside of the United States and they’re traveling by themselves and unaccompanied, to a student who’s traveling abroad and wants to have an internship in the country they’re in and wants to continue working, to someone who has research with a third party somewhere else in the world and wants to do that over the summer, or just opportunities to go to a conference,” said DÃ­az MejÃ­a.

The SEC is supportive of the resolution which will soon come before ASWC, as international internships could play an important role in preparing students for careers beyond Whitman and the United States.

“We’re excited about the college rethinking this whole prohibition because we hear from so many students, whether they’re international students or United States citizens … who want to have access to the international sphere for whatever their academic area is, whatever their professional goals are, whatever kind of networks they want to enter,” said Assistant Dean of Student Engagement Noah Leavitt. “[International internships] make a lot of sense for a lot of students at a college that’s looking to prepare people to go out into a complicated globalized world.”

In order for the college to reinstate independent travel abroad, a number of boundaries will need to be overcome. Travel was discontinued two years ago because there were not sufficient staff to evaluate travel proposals to ensure students would be going into safe, academically valuable situations.

Professor Jonathan Walters, who heads the Global Studies Initiative at Whitman, is in favor of the college funding student travel abroad, but believes the program should be pursued with caution.

“It’s something that needs to go through various kinds of vetting. The lawyers have to figure out how to do it, the Registrar’s Office has to figure out how to do it. How do we vet these programs? Are all internships credit-worthy? Should all internships be paid for? But if not, who decides that? How do we decide that?” said Walters. “Instead of just opening up the floodgates, we want to do it in a thoughtful way.”

A Long Way from Home

While the debate on opening up internships abroad continues, international students remain a long way from home in more ways than one. It can be extremely lonely arriving on a campus where very few people speak your native tongue.

“I think people here are really nice and friendly and lovely, and I think that’s the thing that appeals to international students like me. I’m from a very far away country and it would be really sad if I had to live here alone and nobody talked to me because I’m an international student,” said Kraisitudomsook. “When I came to visit here many people talked to me even though I’m not an American, and they [made] me like one of them.”

Most international students have to adapt to a change in scenery when they arrive at Whitman. Some find that the reality is quite different from their expectations: First-year Chi Hang â€˜”Jeff” Liu went through his application process assuming that Whitman was in Washington, D.C.

“[When I heard Whitman] was in Washington, this led me to misunderstand that it was in Washington, D.C.; I didn’t know that it meant Washington state … The moment I checked the website I was like, ‘Walla Walla! Oh, I’m screwed!'” said Liu. “I went to the Canadian International School in Hong Kong. Big city, big lights, this was different. But I like it here a lot.”

Though there are significant obstacles to international students attending or trying to attend Whitman, there are still many students from all over the world who want to make it work. They just need more ways to navigate the cultural, financial and logistical difficulties of getting here.